Bullet holes were found in a Jackie Robinson memorial in Georgia.

The Georgia Historical Society (GHS) has reported that a memorial dedicated to Jackie Robinson, and other landmarks, was riddled with bullet holes after being shot at by vandals.

In a release on Tuesday, the organization said, "The Birthplace of Jackie Robinson," memorial in Grady County, Georgia, was hit on both sides by gunfire last week and is part of a concerning increase in attacks on historical markers for Black figures in the state.

"I was distressed to learn about the desecration of the Jackie Robinson marker, just as I was saddened last summer when I learned about the repeated vandalism of the marker recognizing the lynching of Mary Turner," Erroll B. Davis, Jr., a Georgia Historical Society board member, the former chancellor of the University System of Georgia and president of the African-American Heritage House at Chautauqua, said.

"Jackie Robinson was a pioneer in the integration of Major League Baseball and someone whose accomplishments should bring pride to all Americans. This is a shameful act of vandalism that unfortunately has been carried out against several other markers that commemorate Civil Rights figures, in Georgia and beyond," Davis added.

The organization said that in addition to the damage done to the markers for Robinson and Turner, there were other instances of vandalism involving the "Flat Rock African Methodist Episcopal Church" memorial in Fayette County and another Civil War monument in Fulton County.

"Jackie Robinson is one of Georgia's most famous native sons and is justly lauded not only for breaking baseball's color barrier, opening the door for others like Henry Aaron to follow, but also for his Civil Rights activism beyond the baseball field," said Todd Groce, president and CEO of the Georgia Historical Society.

"This act of destruction underscores the need for an endowment for the GHS historical marker program that will help us replace this marker and others like it and ensure that our commitment to telling all of Georgia's history will not be subject to other senseless acts of destruction," he added.

Groce later spoke to CNN and said the organization was worried about the increase in vandalism, particularly involving weapons.

Grady County Sheriff's Office Lt. Daniel Lindsay told CNN that police did not have any suspects but believe the bullets came from a shotgun.

As Blavity previously reported, a number of commemorations to Black historical figures are routinely shot at or destroyed.

A design studio had to make a bulletproof version of a commemorative sign honoring Emmett Till in Mississippi because it had been shot at so much. 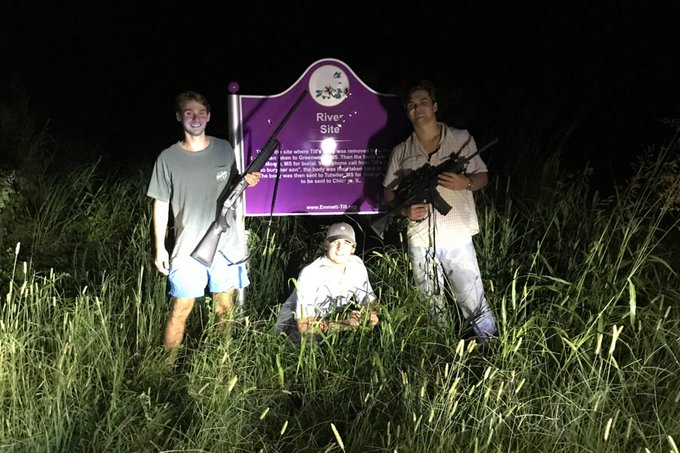 Three University of Mississippi students even shot at it and took photos next to the bullet-ridden sign.

Ole Miss students. One named Ben LeClere's, another named John Lowe.
This picture is in front of a sign meant to honor Emmett Till.
The story came out today.
Today is Emmet Till's birthday.https://t.co/PmKtjG4Wrhpic.twitter.com/pQVf5pvEMj — Stess The Emcee (@StessTheEmcee) July 25, 2019

Groce was interviewed by the Atlanta Journal Constitution and told them that all 44 of the markers on the Georgia Historical Society's Civil Rights Trail have faced increased danger over the past few years.

"It's hard to imagine that it's just a coincidence. It's either these markers have struck a nerve with people [in a way] that contradicts something that they've been taught in the past, or something's happening in society that has triggered this kind of violent reaction," Groce said.

These people are not Mensa candidates.

Our nation has serious issues.

People who do this are poison.

Emmet Till. That's a terrible part of our history.

As an aside, the sign the idiots are standing next to is not the bullet proof sign.

Can't speak to the reason why that particular sign was the target of gun fire, and apparently so much of it. Travel down any backroad, in my area, and you'll discover that trash doesn't need a reason to do this idiotic stuff. (although the fact that these upstanding gents paused to pose with this sign, guns in hand...can I say fuck on here?)