CHICAGO (AP) — Loyola Chicago is back in the NCAA Tournament. And Sister Jean will be there, too.

The 101-year-old team chaplain’s lobbying paid off Tuesday when the school reversed course and announced she will go. That means she gets to watch her beloved Ramblers in person for the first time this season when Loyola meets Georgia Tech in Indianapolis on Friday. 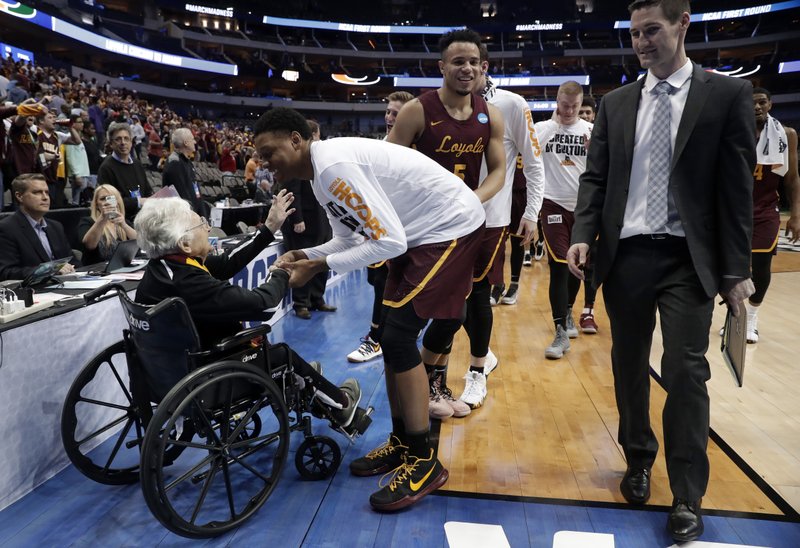 Loyola made a surprising run to the Final Four, charming the nation with one last-second victory after another. Along the way, it shined a light on the 1963 team that broke racial barriers on the way to what remains the lone NCAA championship for an Illinois school.

Above all else, at age 98, Sister Jean became a celebrity, with national TV interviews and even her own bobblehead.

It was quite a ride. But it was not clear if she would be along — in person, anyway — this time.

Loyola (24-4) leaped into the AP Top 25 for the first time since March 1985 and hit the 20-win mark for the fourth year in a row. The eighth-seeded Ramblers come in with the nation’s stingiest defense, allowing 55.5 points per game.

Leaving aside the basketball and the Catholic connection,  I just like seeing a 101 year old be doing so well and able and eager to travel to go watch her favorite team play.

It is doubtful that Loyola can repeat the miracle tournament run they had in 2018, but it is still a cool story.