A ship the length of four football pitches is wedged across one of the world's busiest trade routes.

A giant container ship the length of four football pitches has become wedged across Egypt's Suez Canal, blocking traffic in one of the world's busiest trade routes.

Dozens of vessels are stuck, waiting for rescue boats to free the 400m-long (1,312ft) ship, which was knocked off course by strong winds.

Egypt has reopened the canal's older channel to divert some traffic until the grounded ship can move again.

The mishap has created long tailbacks.

About 12% of global trade passes through the Suez Canal, which connects the Mediterranean to the Red Sea and provides the shortest sea link between Asia and Europe.

The Ever Given, registered in Panama, was bound for the port city of Rotterdam in the Netherlands from China and was passing northwards through the canal on its way to the Mediterranean.

The 200,000 tonne ship, built in 2018 and operated by Taiwanese transport company Evergreen Marine, ran aground and became lodged sideways across the waterway at about 07:40 local time (05:40 GMT) on Tuesday.

At 400m long and 59m wide, the ship has blocked the path of other vessels which are now trapped in lines in both directions.

The company that manages the container ship, Bernhard Schulte Shipmanagement (BSM), has denied earlier reports that the ship had already been partially refloated.

In a statement, it said its "immediate priorities are to safely re-float the vessel and for marine traffic in the Suez Canal to safely resume".

Experts have warned the process could take several days.

Reuters, quoting local sources, says there are at least 30 ships blocked to the north of the Ever Given, and three to the south.

Evergreen Marine said the ship was "suspected of being hit by a sudden strong wind, causing the hull to deviate... and accidentally hit the bottom and run aground".

BSM confirmed on Wednesday that all crew were "safe and accounted for", with no reports of injuries.

Eight tug boats are working to refloat the ship, and diggers on the ground have been removing sand from where it is wedged into the side of the canal bank.

Dr Sal Mercogliano, a maritime historian based in the US state of North Carolina, told the BBC that incidents such as this were rare, but could have "huge ramifications for global trade".

"This is the largest vessel ever to go aground in the Suez Canal," he said, adding that the ship got lodged in the embankment and would have lost power and its ability to steer.

"If they are unable to pull her free... in a high tide, they are going to have to start removing cargo."

Julianna Cona, who says she is on board another ship located directly behind the Ever Given, wrote on Instagram: "Ship in front of us ran aground while going through the canal and is now stuck sideways looks like we might be here for a little bit..."

The Suez Canal is an artery of world trade, connecting the Mediterranean with the Red Sea, and providing an avenue for vessels to pass between Asia and the Middle East and Europe. The main alternative, a passage round the Cape of Good Hope at the southern tip of Africa, takes considerably longer.

On average, nearly 50 vessels per day pass along the canal, although at times the number can be much higher - accounting for some 12% of world trade. It is particularly important as an avenue for oil and liquified natural gas, enabling shipments to get from the Middle East to Europe.

The nightmare scenario, then, is for this crucial route to be blocked - which is exactly what has now happened with the stranding of the Ever Given. The question now is how long the route remains impassable, as a long delay would create serious problems for shippers, delaying consignments of goods and fuel.

On this occasion, reports suggest traffic could be flowing again relatively quickly, in which case the impact will be limited, although there has been a rise in the oil price.

But the incident has shown what can go wrong when the new generation of ultra-large vessels like the Ever Given have to pass through the relatively tight confines of the canal. Although parts of it were expanded as part of a major modernisation programme in the middle of the last decade, it remains tricky to navigate - and accidents can happen.

The ship has the capacity to carry 20,000 20-ft shipping containers, according to Reuters news agency.

In 2017, a Japanese container vessel blocked the canal after it ran aground following reported mechanical issues. The Egyptian authorities deployed tug boats and the ship was refloated within hours. 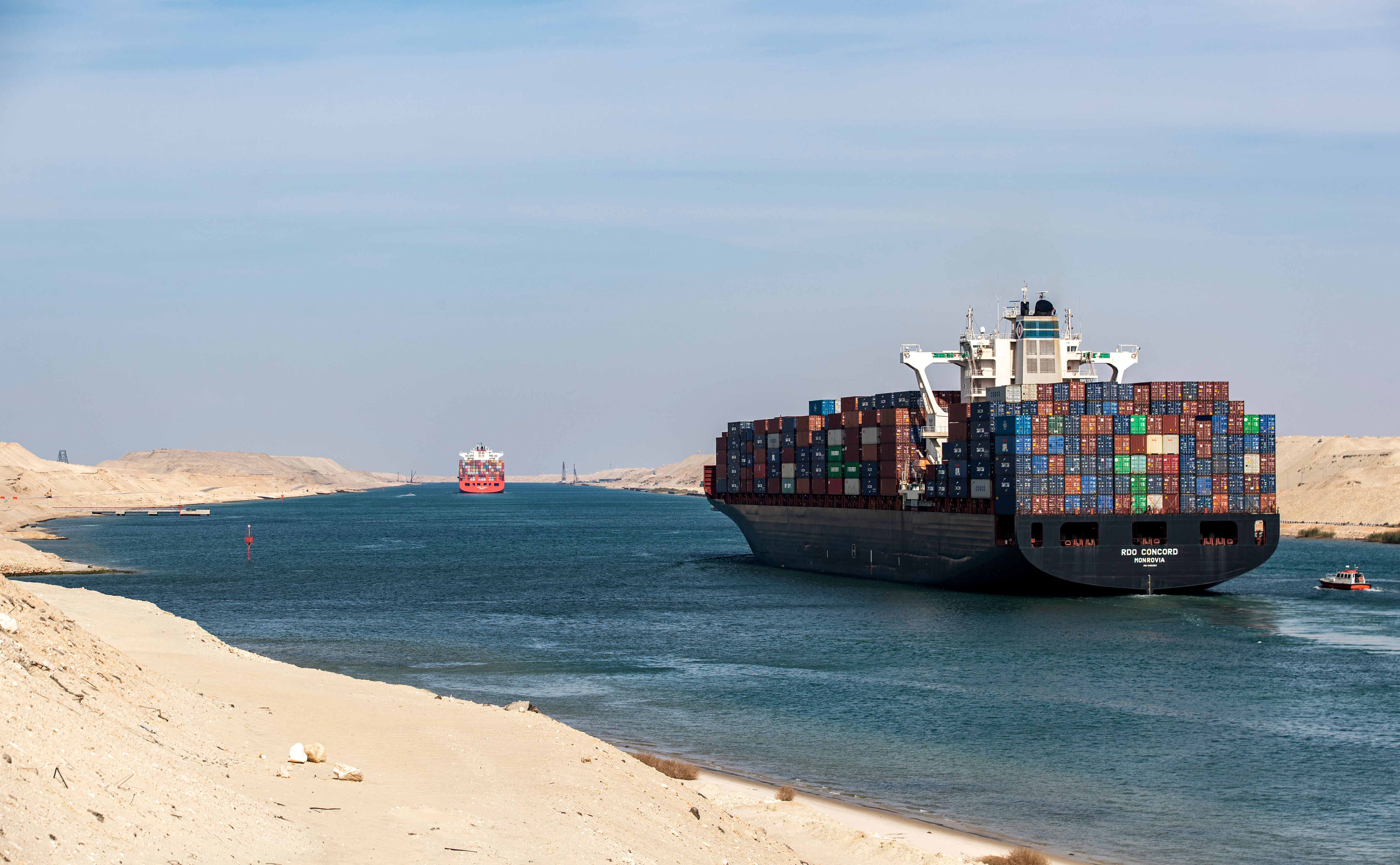 The Suez Canal crosses the Suez Isthmus in Egypt - a strip of land between the Mediterranean and Red Sea. The canal is 193km (120 miles) long and incorporates three natural lakes.

In 2015, Egypt's government opened a major expansion of the canal that deepened the main waterway and provided ships with a 35km (22 mile) channel parallel to it.

Did you witness the incident? Are you on board another vessel on the Suez Canal? Tell us your story by emailing: haveyoursay@bbc.co.uk .

Please include a contact number if you are willing to speak to a BBC journalist. You can also get in touch in the following ways:

More on this story

I wonder what this will do to the price of gas around here.

How did a ship that big get sideways to begin with?

Apparently a sandstorm took away visibility and they cruised into the bank, then the rear around comes around and you get what we have here.

I thought these ships had all kinds of technology to prevent these kind of things.

They probably do, but I think Ed (below) has a good point about the force of the wind. With a ship that weighs 400,000,000 pounds, there’s only so much fine control you can have in adverse conditions.

Or we’re all wrong and the helmsman was drunk.

How they get it pointed the right direction will be interesting.

When considering just how high the cargo containers are stacked, that creates some pretty sizable wind break that high winds go up against. Strong enough winds hitting that can force the ship sideways.

Damn Ed...you did learn something after all those years on gator-freighters.....but exactly right.   With all that freeboard even a 5MPH gust hitting at the beam generates forces in the tons range that have to be corrected for.

My guess, the ship got hit with just such a wind.  He corrected with rudder movement, and the ship got away from the helmsman.  I have to wonder if the container ship in question had thrusters that could have resolved, or even caused this problem.

Second incident for this ship.  Similar thing happened while docking in Hamburg in 2019 and she crushed a tug boat.

She is over 1300 ft long and 193 ft wide and is in excess of 13 stories high. She does have thruster but in that narrow of a passage, the wind can and will move her.

The containers are stacked 9 to 10 high on the top deck on average height each container is 9 ft high. That's between 8 and 9 stories high and then you have from the water line to the deck, another 5 stories. At over 1300 feet long that is one hell of a lot of sail for the wind to hit.

BTW, only 3 years old she is no longer the largest container ship in the world the newest generation carry over 23,000 TEU's vs this one 20,124.

To give you a comparison of size the Nimitz class aircraft carriers are 1092 feet long vs Ever Given 1312 ft long. 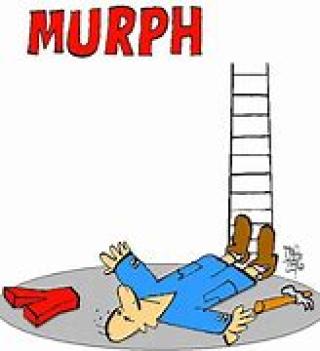