Before you buy NFTs, here's how to think about their price

community » Discussions » Category » News & Politics » Discussion » Before you buy NFTs, here's how to think about their price

The New York Times and Taco Bell have put NFTs up for sale. An economist explains how NFTs have value.

How emotional attachment to certain items and gifts could affect our understanding of value. 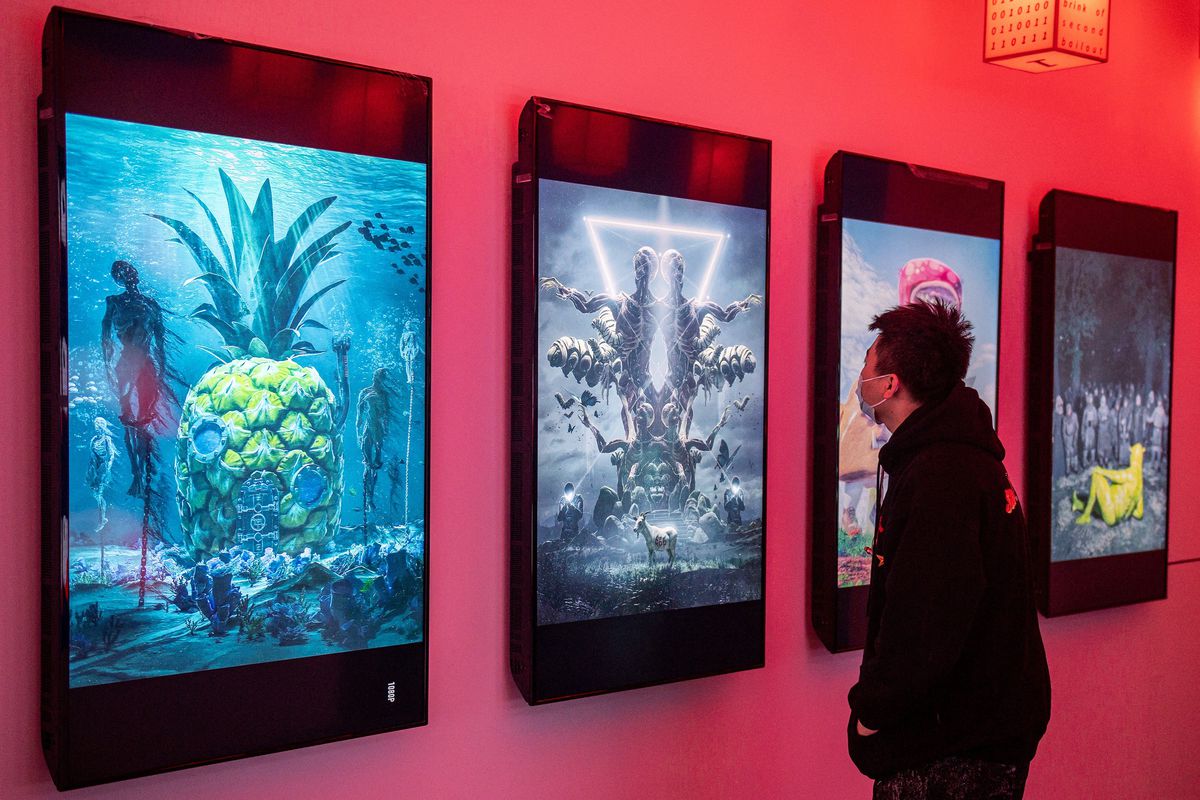 A man looks at digital paintings by the artist Beeple. It is one of the world's first physical exhibitions of blockchain art.Nicolas Asfouri/AFP/Getty Images

Brands are very, very excited about non-fungible tokens. Over the past month, some of America's most recognizable brands have eagerly hopped onto the bandwagon, selling limited-edition Taco Bell cryptoart, old Time magazine covers, a New York Times column, and a virtual Pringles chip flavor. Non-fungible tokens, it seems, have entered the mainstream, even as the technology remains confusing and largely inaccessible to regular Americans.

(If you're reading this story and thinking, "What the hell is an NFT," fear not, Vox has an explainer on it. So does Saturday Night Live , if you'd rather listen to Pete Davidson rap about cryptocurrency.)

Cryptoart advocates are excited by the millions of dollars poured into this emerging market for digital goods, which has catapulted the careers of some independent NFT creators. Meanwhile, some critics are put off by the speculative mania surrounding NFTs and the resale market that has driven prices up.

I've previously written about how NFTs seem almost counterintuitive to the digital media age; the technology codifies and enforces a metric of scarcity on a digital file that is at odds with the idea of an open internet. That abstract notion of virtual value and scarcity has befuddled most people as they seek to understand the technology. These goods, after all, have no tangible, physical value. So, they wonder, what's the big deal?

To further explore these concepts, I spoke with Matt Stephenson, a PhD candidate at Columbia University, who researches and studies behavioral economics and non-fungible tokens. He has also worked with Dapper Labs, the company that developed the blockchain technology for NBA TopShot. Stephenson touches upon how our emotional attachment to items and gifts — including digital ones — could upend existing ideas of value and how they apply to NFT ownership.

How do you think about the concept of value as it applies to NFTs?

In economic literature, there's this interesting division between functional value and hedonic value. You might think of that as basically saying, "What can I use this to do?" versus "How much do I like this thing, in and of itself."

For the first camp, that's where you see most of the discussion around NFTs: this idea that you're going to flex with your NFTs, show people your cryptocurrency wallet, and display your taste in art or music. This functional view also encompasses other things, like how much money a person can make around this sort of speculative mania in the resale market. Even the trend of tokenizing real-world assets by putting them on the blockchain relies on this functional approach.

The second way to look at NFTs is through its hedonic value. There's a 2012 paper that examines this idea as it relates to World of Warcraft and in-game items. A player was given a shield from her friend. This shield is actually a pretty common item, but the player didn't want to drop, destroy, or sell the shield. In her mind, even if she could easily buy the same shield, its value won't be the same as the gifted one.

I like this example because it clearly outlines the hedonic elements of digital scarcity. It matters to the player where she got the shield. For most digital things, like money, this intrinsic, hedonic value wouldn't make sense. With NFTs, things that were once treated as interchangeable on the digital space, like a gifted shield or a virtual collectible, are allowed to exist with this added value that is appealing to a buyer or owner.

The hedonic aspect of value seems very abstract, which is probably why people don't mention it as much as the functional approach. What stuck out to you about this idea of hedonic value?

I would say there's even a hedonic approach to the idea of provenance, which a lot of artists and NFT creators emphasize. There's this story about the Mona Lisa, how it was once hung on Napoleon's bedroom wall, and the painting's history and association with him brought it great cultural value.

I'm going to drop a very jargony word here, which is called "biographical indexicality." In the theory of collectibles, the idea is that people like collectibles because they have some sort of biographical element that indexes some important events in the past or its relation to a person's life in history. The fact that this notion is being applied in the digital space through NFTs is just really exciting to me.

There's been a lot of attention given to the bidding wars that are happening in the NFT space. Artists like Beeple have built their careers off of the interest in NFTs. I think this price inflation is confusing regular people, who are trying to wrap their minds around digital scarcity and the novelty of this technology. How are you making sense of this range of prices, in relation to the vague idea of digital scarcity?

There's a flip side we don't hear about often that's in direct contrast to the artists who minted an NFT and put it up for $100, but sold it for $10,000. There might be people who paid $10 in gas fees to upload some artwork or a tweet thinking it was going to sell for $1,000 and it never does. Then, they just lost $10. That notion of demand is really necessary for digital scarcity to work. Other people have to want it.

I do think it's related to this superstar economy emerging in the NFT space. It's something people are rightly concerned about, or at least annoyed by. The internet brings the marginal cost of copying a file to basically zero. In economics, we traditionally think that superstar economies are created by these low marginal cost technologies, like radio or TV. The internet is great at that.

We already have a superstar economy based on attention, surrounding people who have, for example, enormous amounts of Instagram or YouTube followers. I think it's pretty reasonable to suspect that a lot of the early activity around NFTs is based on attention. I can see how it's easy to confuse that to the work being digitally scarce.

Would you say there's a bubble effect happening right now?

Yeah, the bubble is certainly attracting a lot of attention. I think with the popping of that bubble, if and when it happens, we'll see a loss of credibility toward the space. There are definitely these trade-offs, but my view is it's good to focus on what the technology actually does and not just the pricing. There's unquestionably some speculation and froth around this stuff, but more people are paying attention, and it's changing how artists are thinking about their work and how they get paid.

More companies and brands are getting into NFTs. Do you think there will be an impulse to tie NFTs to the physical world, just because the technology still seems so abstract?

When you talk to people about NFTs, that is often the first place their mind will go. There's a lot of small experimentation, so I wouldn't want to say there's nothing to this idea of tokenizing real-world assets. I do think it's one of the hardest things you could possibly try to do with NFTs or blockchain in general. The blockchain doesn't know about the real world.

If you say this token represents these sneakers, and then somebody steals your sneakers, what do you do? Do you send them the token to make sure that you keep fidelity between the token and the statement? You probably won't. Can you use the virtual token to enforce your ownership of the sneakers?

I know Nike patented some design around making sneakers based on this algorithmic token. Going back to that model of functional versus hedonic value, having a real-world application is more of a functional idea. You're trying to get people to care about NFTs because there's a chance they might get, like, a cool sneaker.

For a lot of people who put their work on the internet, there's an inherent understanding that it will be accessible to whoever has access to a computer or phone. Do you think this technology will alter the concept and our understanding of the open internet?

The idea of the open internet is really powerful. In some sense, NFTs do impose scarcity on something that naturally doesn't have scarcity. There's the immediate pushback as to why someone would want to make something more scarce if people want it. Elinor Ostrom, a Nobel Prize-winning economist, has an interesting theory on this. She's studied the ways communities managed their own resources with or without governments and the idea of the tragedy of the commons — that overconsumption hurts everybody in society.

So, to tie this back to NFTs and the internet: The free aspect of the internet and social media, I think, possibly depletes the stock or value of the content out there. Anything you make — even something that took you a lot of time — as soon as you put it on the internet, the price of that is basically zero because the marginal cost of reproducing it is zero. That implicitly means that nobody should pay you anything for what you created, no matter how much work it took. With this current system in mind, more scarcity could be helpful.

I think the duality of NFTs is also very cool, where somebody is willing to pay a lot because they have this particular connection to a piece of art or music, while the file remains completely free and available. In that way, you kind of achieve the dream of the open internet, while also ensuring compensation for the producers.

I have to admit, I read this article and hardly understood a word of it.

I am getting really old.

It doesnt bother me at all that I don't understand a word of it though. I'm not into the crypto world.

The article never does say what an NFT is.

"The article never does say what an NFT is."

I just skimmed the article because I was curious:

Something that doesn't have monetary value?

I admit I didn't look up what fungible or non-fungible means but I'm about to.

This is the first I've heard of this.  Have heard of crypto-currency, but haven't seen the need to look into it.

One day this sort of gobbledygook will have taken over the world. We get closer every day.  I'm not too upset that I probably wont be around to see most of it.