How Did Larry Elder Become a Front-Runner in California's Governor Race?

Mr. Elder, a conservative radio host who paints himself as the native son of a simpler and safer California, has drawn criticism from Democrats and Republicans alike.

Mr. Elder, a conservative radio host who paints himself as the native son of a simpler and safer California, has drawn criticism from Democrats and Republicans alike. 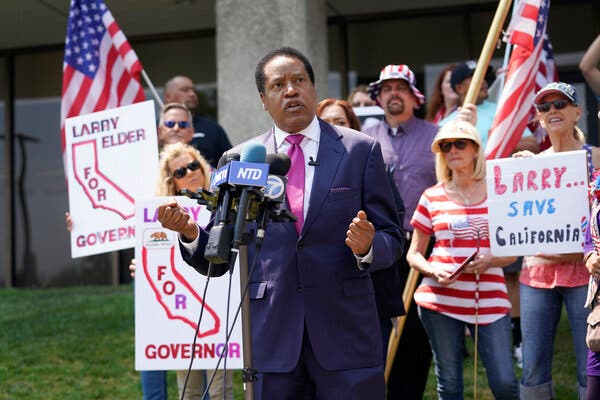 SACRAMENTO — For a generation, Larry Elder has been an AM radio fixture for millions of Californians, the voice they could count on when they were fed up with liberal Democratic politics. Undocumented immigrants? Deport them. Affirmative action? End it. Equal pay? The glass ceiling doesn't exist.

Now Mr. Elder, a Los Angeles Republican who bills himself as "the sage from South Central," could end up as the next governor of the nation's most populous state. As the campaign to recall Gov. Gavin Newsom has become a dead heat among likely voters, Mr. Elder has emerged almost overnight as the front-runner in the campaign to replace him.

Fueled by a combination of arcane recall rules, name recognition and partisan desperation, his rise to the top of a pack of some four dozen challengers has stunned and unnerved many in both parties.

Democrats call him the agent of a far-right power grab. Republican rivals say he is an inexperienced, debate-dodging opportunist. Orrin Heatlie, the retired sheriff's sergeant who is the recall's lead proponent, said he and his fellow activists were voting for someone else.

This month, The Sacramento Bee and two Republican candidates — Kevin Faulconer, the former San Diego mayor, and Caitlyn Jenner, the television personality and former Olympian — demanded that Mr. Elder drop out of the race after an ex-girlfriend of his said he brandished a gun at her while high on marijuana during a 2015 breakup.

"We were having a conversation and he walked to the drawer and took out a .45 and checked to see that it was loaded," Alexandra Datig, 51, said in an interview. Ms. Datig, who worked as an escort in the 1990s and now runs Front Page Index, a conservative website, said: "He wanted me to know he was ready to be very threatening to me. He's a talented entertainer, but he shouldn't be governor."

Mr. Elder, 69, did not respond to requests for comment about Ms. Datig's claims, but he did tweet that he has "never brandished a gun at anyone," adding, "I am not going to dignify this with a response."

The onslaught has come as a Sept. 14 election deadline nears. Ballots have been mailed to all active registered voters, asking whether the governor should be replaced, and, if so, by whom.

ImageSupporters of Mr. Elder outside of a debate by Republican candidates this month.Credit...Marcio Jose Sanchez/Associated Press

Constitutional scholars say Mr. Elder's sudden ascent is an example of all that is wrong with the recall process, which requires a majority to recall a governor but only a plurality of votes for the replacement candidate to win. With 46 challengers on the ballot, 49.9 percent of the electorate could vote to keep Mr. Newsom, and he could still lose to a replacement who is supported by only a tiny sliver of voters. Polls show a rout by Mr. Newsom among all Californians but a far tighter race among likely voters, 20 percent of whom favor Mr. Elder.

Mr. Newsom, whose fate rides on turnout, has made a foil of Mr. Elder, a "small-l libertarian" who reliably agitates the governor's base with claims, for instance, that the minimum wage should be zero, the "war on oil" should be ended and racial preferences are destructive.

"The leading candidate thinks climate change is a hoax, believes we need more offshore oil drilling, more fracking, does not believe a woman has the right to choose, actually came out against Roe v. Wade, does not believe in a minimum wage," Mr. Newsom has told supporters.

"Don't paint me as some wild-eyed radical," Mr. Elder said in a recent interview. "I'm running because of crime, homelessness, the rising cost of living and the outrageous decisions made during Covid that shut down the state."

To his loyal listeners, Mr. Elder paints himself as the native son of a California that was once simpler and safer than the teeming, disaster-prone nation-state he sees anchoring the West Coast today. Listeners know that his father, a former U.S. Marine, saved his pay as a janitor to open a restaurant in Los Angeles's Pico-Union district, and to buy a house in a neighborhood that shifted from mostly white to mostly Black residents in less than a decade.

His father was also violently abusive, Mr. Elder wrote in 2018, driving him to leave home the moment he graduated from Crenshaw High School. Admitted to Brown University under an early affirmative action program, Mr. Elder, the second of three sons, stayed away from California for years, moving on to the University of Michigan Law School and becoming a lawyer and legal recruiter in Ohio.

He was a guest on a Cleveland PBS show when the stand-in host, the Los Angeles-based conservative talk radio host Dennis Prager, suggested he come back.

"I was so impressed with his original mind and phenomenal grasp of the issues that when I returned to Los Angeles I invited him onto my show — solely in order to persuade the KABC station manager to hire him," Mr. Prager wrote in an email.

ImageMr. Elder in a Burbank, Calif., studio last month. He has been on talk radio in the Los Angeles area since 1994.Credit...Marcio Jose Sanchez/Associated Press

It was the age of Rush Limbaugh, and Mr. Elder rose swiftly. Los Angeles progressives boycotted his advertisers, but he hung on, writing books, making Fox News appearances and expanding through syndication until 2014, when the station abruptly fired him. Another station soon picked him up; Salem Media Group has syndicated his show since 2016 and is holding his slot while he campaigns.

"I have never, ever, ever, ever thought I would be entering politics," Mr. Elder said. But he was persuaded, he said, by Mr. Prager, Jack Hibbs, the evangelical pastor of Calvary Chapel Chino Hills, and a host of others including radio colleagues, his barber and his dry cleaner.

Mr. Elder's political positions speak loudly and clearly to the state's small but vocal strain of far-right conservatism. He supports school vouchers and prioritizes jobs over environmental and climate considerations. He opposes abortion. He is vaccinated against the coronavirus because of a rare blood condition but opposes vaccine and mask "mandates."

And, G.O.P. consultants note, Mr. Elder is among a handful of California Republicans with enough name recognition to compete in a state of almost 40 million people.

"I've been a listener of his for years," said Shelby Nicole Owens, 35, a Republican in the rural community of Sonora who admired Mr. Elder's consistency and "common-sense approach" long before her ballot arrived in her mailbox.

"Done and done!" she posted on his Facebook page, adding a kiss-blowing emoji after marking her vote.

But establishment Republicans such as Mr. Faulconer say he is more suited to provocation than to governing.

While other candidates disclosed their income taxes, Mr. Elder supplied partial returns and then successfully challenged the state requirement, keeping his private.

ImageGov. Gavin Newsom has made a foil of Mr. Elder, a "small-l libertarian" who reliably agitates the governor's base.Credit...Justin Sullivan/Getty Images

After incomplete conflict-of-interest disclosures — now being investigated by state campaign finance regulators — were amended, they showed that Mr. Elder is being paid by The Epoch Times, a purveyor of political misinformation and far-right conspiracy theories.

He has refused to debate other Republicans and bashed the news media when challenged. He has told left-leaning editorial boards that President Biden fairly won in 2020 and conservative radio interviewers that he did not.

He has recanted assertions made in 2008 that climate change is "a crock" but, in an interview, offered $10,000 to charity for proof he had ever said that and falsely claimed that "nobody really knows to what degree" humans caused climate change. He has written that Democrats do better with female voters because, according to academic research, "women know less than men about political issues."

In an interview this month, Mr. Elder said he had been single since an amicable divorce in the 1990s, and now shares his Hollywood Hills home with a girlfriend who is an interior designer.

Asked about Ms. Datig, he said they had dated "for a few months and that's it." Ms. Datig said they lived together between 2013 and 2015 for 18 months and discussed marriage.

Employed by Heidi Fleiss and the now-deceased Beverly Hills Madam during the 1990s, Ms. Datig has since spoken publicly against sex trafficking and worked as an assistant to a now-retired Los Angeles city councilman. She used her connections to help Mr. Elder get a Hollywood Walk of Fame star, she said, and tattooed "Larry's Girl" across her lower back. 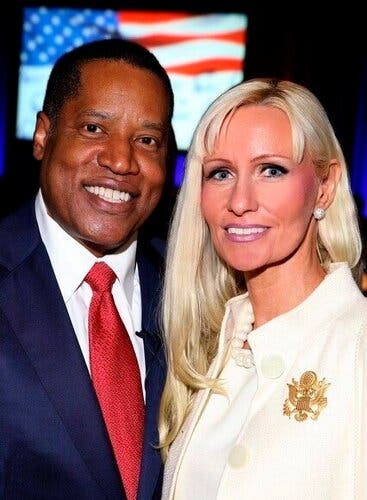 But as the relationship deteriorated, she said, he threatened eviction. A legal agreement shows she left for $13,000 in relocation money, $7,000 for tattoo removal and a Cadillac.

She did not report the alleged gun incident to the police, she said, in part because she had signed a 2014 nondisclosure agreement, but she did ask for help from acquaintances and city officials. Three confirmed last week that they had gotten her emails.

Ms. Datig, who has endorsed Mr. Faulconer, said she went public after learning that her NDA was less restrictive than she had realized.

And Ms. Owens, the voter? At her farm in Tuolumne County, she predicted that fans of Mr. Elder would be unshaken.

"There does not seem to be a politician alive today," she said, "that doesn't have some sort of past relationship scandal."

The sage from South Central, she added, still has her vote.

Larry Elder is totally unfit to hold office. It would be like electing Rush Limbaugh the governor of Florida.

His ex girlfriend btw, says he kept insisting she do threesomes with two other women. She says she went along at first but didnt think it would become a permanent thing.

We are a blue state and we intend to keep it that way.

I see the left wing smears have started.

He can't be any worse than Clinton, and no-way-qualified-Kamala fucked her way to the top.

I'm pretty sure that , if elected, Larry Elder would be the most right wing extremist governor in the country.

Plus someone who knows him fairly well says he is of low character.

Plus if you watch him on tv, he's just an oddball.

I cant believe California would consider putting him in office as governor.

Another immoral scumbag on the 'right'.