Delta variant is making consumers pull back on their spending, new data shows

Consumers are feeling more skittish about their spending, with new data on consumer sentiment reflecting "the least favorable economic prospects in more than a decade."

Consumers are feeling more skittish about their spending, with new data on consumer sentiment reflecting "the least favorable economic prospects in more than a decade," according to the University of Michigan's August survey, which recorded one of the sharpest ever plunges in the survey's history.

The headline index figure of 70.3 reflected a 13.4 percent drop from the previous month, down 5.1 percent from a year earlier.

"It wasn't a total surprise, but… we think it primarily reflects the reality setting in that the pandemic is not, in fact, over, and there's significant uncertainty regarding where things are going from here," said Garrett Nelson, senior equity analyst at CFRA Research.

"It's a very natural reflection of how people feel," said Johan Grahn, head of ETF strategy at Allianz Investment Management. "The news around us had gone from blowing optimistic winds to settling back to a less optimistic picture."

Economists worry that these fears will start to influence consumer behavior and constrain the spending that powers some 70 percent of the American economy. "It's concerning because consumer sentiment is a leading indicator and it's normally indicative of a coming drop in retail sales," Nelson said.

Consumer hesitancy will likely show up first in purchases like plane tickets and restaurant meals.

"The surge of the delta variant has started to impact how comfortable consumers feel being out in public," said Greg McBride, chief financial analyst at Bankrate. A drop in people's mobility and willingness to engage in activities outside the home could distort where, how and to what extent they spend their discretionary income. McBride said economists are most likely to see this hesitancy reflected in a pullback in service-sector purchases like plane tickets and restaurant meals.

Some already see manifestations of more cautious consumption in recent data. Retail sales for July disappointed, falling 1.1 percent — about three-quarters of a percentage point higher than expectations — with especially sharp declines in cars, clothes and sporting goods, according to the Commerce Department.

Retail spending this fall could be further constrained by the winding down of the emergency unemployment insurance programs that provided fiscal stimulus and financial support to millions of jobless Americans, Nelson predicted. "We do think that will have a significant negative impact, but it will be mitigated somewhat by the child tax payments," he said.

"The delta variant is still the biggest near-term risk for retail spending, and if we see a rebound in ecommerce because of it and consumers staying away from stores, that's going to really hurt retailers," Nelson said, since in-store sales yield higher margins than their digital counterparts.

Federal Reserve Chairman Jerome Powell acknowledged inflation concerns in a closely watched virtual appearance in conjunction with the Fed's annual policy conference on Friday, while still repeating the central bank's assertion that rising prices do not, for the moment, represent a systemic risk or the development of an inflationary cycle of increasing wages chasing rapidly rising prices.

But that message might not be getting through. "A lot of consumers are indicating that they're skeptical about that," McBride said. "Even if inflation does prove temporary, it still puts a crimp in household budgets and could lead to softer spending," he said.

If inflation fears begin to weigh on Wall Street as they are on Main Street, that could reverse the sizable gains the major equities indices have realized this year — and that, Grahn said, could deliver yet another blow to Americans' fading optimism.

"The market for sure will be responding to it, and that will trigger an additional layer of anxiety," he said. "That would be more painful."

ah screw it, no one need get vaccinated, it will just go away, cause i can't be bothered with this BS vaccination crap, we've got to get this country back to work and screw those liberty stealing masks, and all we want is NO more shutdowns, just pass the flask, cause just how stupid and ignorant is this nation....

ah screw it, no one need get vaccinated, it will just go away, cause i can't be bothered with this BS vaccination crap,

Yeah screw it. The vaccines aren't 100% affective against the Delta Variant; and breakthroughs are on the rise.

But there has been a recent rise in breakthrough cases across the country, defined as people contracting the virus after being fuilly vaccinated. The U.S. Surgeon General Vivek Murthy said last week that this is likely due to the strength of the widespread Delta variant and that,  "...protection against mild and moderate disease has decreased over time."

At least 1 in every 5 new COVID-19 cases in six of these states have involved vaccinated people, with higher percentages of hospitalizations and deaths among these folks than had previously been seen in all seven states, The New York Times reported.

If breakthrough infections are becoming more common, "it's also going to demonstrate how well these vaccines are working and that they're preventing hospitalization and death, which is really what we asked our vaccines to do," said Anne Rimoin, an epidemiologist at the University of California, Los Angeles, told the Times.

Importantly, a vast majority of vaccinated people who are hospitalized for COVID-19 are likely to be older adults or those who have weakened immune systems. CDC data show that 74% of breakthrough cases are among adults aged 65 or older.

But good news the Lambda variant has been found in CA! Wonder how that entered the country; oh who cares! We just have the single biggest super spreader event going on our Southern Border. No need to close that. Forget the 14% infection rate among those that are caught; of which not all are even tested before they are released to other states. Not to mention those that are not caught and are free to move about the country.

we've got to get this country back to work and screw those liberty stealing masks, and all we want is NO more shutdowns,

What do you mean "get this country back to work"? The Democrats are ensuring people stay at home by making unemployment benefits are indefinite; even after the $300 bonuses expire in September. Biden illegally extended the rent moratorium; so until the Supreme Court upholds their original ruling the Democratic party bus is still going. Unemployment is still very high 5.4% as of July; yet their are millions of unfilled jobs.

U.S. employers posted a fresh record 10.1 million job openings in June, as companies struggle to lure workers back into the job market and fill open positions.

Job openings, a measure of labor demand, rose by 590,000 to 10.1 million on the last day of June, the Labor Department said in its monthly Job Openings and Labor Turnover Survey, or JOLTS report, on Monday.

Hiring also rose to 6.7 million in June from 6.0 million in the prior month. Yet the latest data show that 8.7 million remain on unemployment benefits, meaning there are more jobs available than job seekers for the first time since the pandemic began.

The gap between openings and hiring suggests that firms are scrambling to find workers. A record low 1.3 million people were laid off or fired in June.

Many businesses blame generous federal unemployment benefits – including an extra $300 a week tacked on to regular state jobless aid – for discouraging Americans from seeking work.

In response, many states have dropped the federal unemployment assistance even before it is scheduled to expire nationwide on September 6.

You have to get people back to work before you can even start talking about reopening the economy. Democrats simply aren't interested. But that isn't stopping them from pushing their two porkulus "infrastructure" bills that will explode spending and inflation.

just pass the flask, cause just how stupid and ignorant is this nation....

For once we agree. The majority of voters were very stupid and ignorant to put Joe Biden and the Democrats in charge.

The majority of voters were very stupid and ignorant to put Joe Biden and the Democrats in charge.

R U sure you're knot just dumb, cause can't hear, what you state here, cause didn't ask ewe out on a deaf innate date you appear to be raisin while inable to speak ore too blind ta sea the depths of you're irony, that sinks and rusts your hull point, cause 45 is WHY this virus is still alive and able to thrive , as many dumb individuals are difficult ta hear and or join in in the conversation, they don't really wish to speak of, as it;'s a sign of language, and possibly intelligence. A language the GOP can't see or comprehend , just,  pretend yet again....

The delta variant isn't effecting spending as much as inflation.  Rent, Fuel, and Food prices are up leaving less to spend and rising prices on many other things make them seem like they're not a good deal so we pass.

I definitely think inflation is playing a part in it.  Another big part is the supply-chain disruption caused by the pandemic overall.  I would have bought a new car this year (was in my long-range plans from 3 years back) except for the crazy price increases for new cars brought on by the chip shortage.  I've also been interested in replacing all my kitchen appliances in preparation for retirement (get it all done before I quit work) but the prices on those have gone crazy starting back with the tariffs started in the Trump years and impacted by the supply chain disruption also.

So there are several factors I see that all play into changes in spending patterns. Add in the natural hesitancy of the consumer brought on by confusion and doubt formed by the actions out of Washington and you see a clearer picture.

It's difficult to get excited by something that's been backordered until Hell freezes over... Last year on black Friday I ordered a TV and in mid-Feb found it in stock at another vendor... The same thing is happening to this year's models as is anything that uses microchips.

It doesn't seem to have stopped people around here.

Of course a hurricane on the move makes people go out and buy.

Pre covid, consumers were 69% of GDP and the last quarter was 70.4%. Nearly all of the GDP gains from pre covid are related to goods purchases. 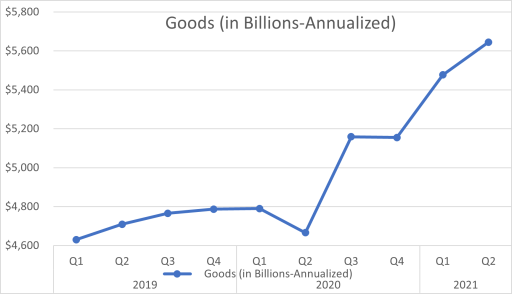 The graph indicates a dramatic jump in goods, which were likely due to simulus money. Most of that is running thin by now, imo. That line should begin to fall back to some semblance of normalcy, as most people have bought most of the shiny new objects they wanted, or was available. (The

Kids (both vaccinated and unvaccinated) are going back to school and bringing covid home to the rest of the family. The kids seem to be doing okay, as they continue to play in their yards. The parents vehicles are at home all day and the parents seem to be sick inside. At least in my neighborhood.

Not exactly a morale booster imo. Shop til you drop!!!

While I am at it. The old folks in my circle bragged about getting all our shots. I wonder if all the breakthough hospitalizations and deaths are being reported... or some have been lying. I dunno.

So basically our whole economy is held up by people buying crap...

Yup. Gotta keep up with the Jones'.