A slow-moving Hurricane Ida has left all of Orleans Parish customers without power due to "catastrophic transmission damage," according to Entergy New Orleans.

Every Entergy customer in Orleans Parish is without power as of 7:15 p.m. due to the "catastrophic transmission damage." 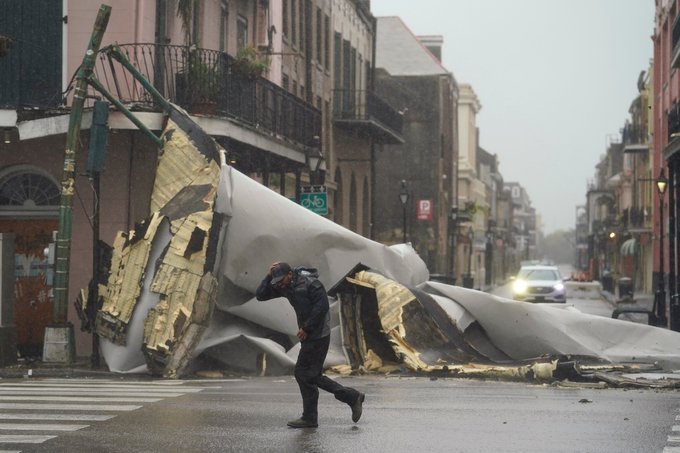 More than 195,000 customers are without power as of 7 p.m., with most areas affected to one degree or another.

Cleco, which accounts for most of the customers on the north shore, reported that nearly 85% of its customers in the parish had lost power, which makes up nearly 80,000 customers, as of 7 p.m. Nearly 20,000 of those come from the Covington area and nearly 14,000 were out of power in and around Slidell.

"As Hurricane Ida moves inland, power outages are increasing," said spokesman Clint Robichaux, in a 5 p.m. update. "Once the storm passes and it is safe for crews to assess damage and make repairs, estimated restoration times will be provided," he said.

Cleco also has brought in 2,000 outside contractors to add to its staff to affect repairs when the storm allows.

Elsewhere, about 11,000 Plaquemines Parish customers were without power, as were around 15,000 households in St. John the Baptist Parish and 11,00 in St. Bernard. Also badly affected was Lafourche Parish, where about 37,000 were out. More than 40% of Cleco customers in Washington Parish are also without power as of 7:30 p.m.

People should stay away from downed power lines and electric equipment and report it immediately by calling 1-800-9OUTAGE (800-968-8243).

"Do not walk in standing water and do not venture into areas of debris, since energized and dangerous power lines may not be visible," Entergy said.

See the latest outages from Entergy in Louisiana.

There are reports of widespread property damage throughout southern Louisiana .

@Be_Benevolent
·
8m
#Hurricane_Ida My sisters in Louisiana say it is "rough." That is code for "it is scary and horrible" when you are trying to stay positive for your little sister. They are in St. Tammany Parish and in Tangipahoa Parish. All I can do is wait. . .

CNN Breaking News
@cnnbrk
· 25m
Every road in Lafourche Parish is impassable, the sheriff says, and two of the three hospitals are damaged as Hurricane Ida rips through the area https:// cnn.it/3gJpSyd
You must be logged in to post a comment
Loading...
Loading...