The Native Americans who occupied the area known as Poverty Point in northern Louisiana more than 3,000 years ago long have been believed to be simple hunters and gatherers. But new Washington University in St. Louis archaeological findings paint a drastically different picture of America's first civilization

Far from the simplicity of life sometimes portrayed in anthropology books, these early Indigenous people were highly skilled engineers capable of building massive earthen structures in a matter of months—possibly even weeks—that withstood the test of times, the findings show.

"We as a research community —and population as a whole—have undervalued native people and their ability to do this work and to do it quickly in the ways they did," said Tristram R. "T.R." Kidder, lead author and the Edward S. and Tedi Macias Professor of Anthropology in Arts & Sciences.

"One of the most remarkable things is that these earthworks have held together for more than 3,000 years with no failure or major erosion. By comparison, modern bridges, highways and dams fail with amazing regularity because building things out of dirt is more complicated than you would think. They really were incredible engineers with very sophisticated technical knowledge."

The Poverty Point World Heritage site consists of a massive 72-foot-tall earthen mound and concentric half circle ridges. The structures were constructed by hunter-gatherers approximately 3,400 years ago from nearly 2 million cubic yards of soil. Amazingly, this was done without the luxury of modern tools, domesticated animals or even wheeled carts. 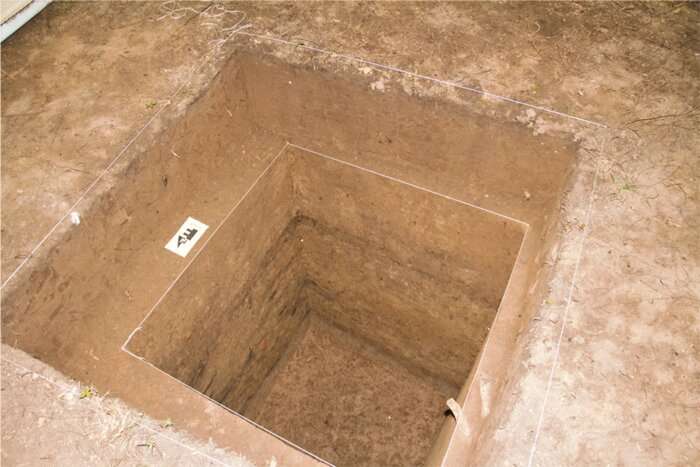 An excavation before sampling. Note the color changes between layers. The darker layers have carbon-rich deposits made by humans, such as midden or garbage that was scraped up and dumped to form the ridge structure during construction. There is little organic garbage in the upper third section. Credit: T.R. Kidder

According to Kidder, the site was likely an important religious site where Native Americans came in pilgrimage, similar to Mecca. It was abandoned abruptly between 2,000-2,200 years ago—most likely due to documented flooding in the Mississippi Valley and climate change.

The ridges at Poverty Point contain vast amounts of artifacts around the edges and within, suggesting that people lived there. Kidder and team re-excavated and re-evaluated a site on Ridge West 3 at the Poverty Point Site that was originally excavated by renowned archaeologist Jon Gibson in 1991.

Using modern research methods including radiocarbon dating, microscopic analysis of soils and magnetic measurements of soils, the research provides conclusive evidence that the earthworks were built rapidly. Essentially, there is no evidence of boundaries or signs of weathering between the various levels, which would have occurred if there was even a brief pause in construction. Kidder believes the construction was completed in lifts, or layers of sediment deposited to increase the ridge height and linear dimensions before another layer was placed to expand the footprint vertically and horizontally.

"Between the speed of the excavation and construction, and the quantity of earth being moved, these data show us native people coming to the site and working in concert. This in and of itself is remarkable because hunter-gatherers aren't supposed to be able to do these activities," Kidder said.

What's even more impressive than how quickly the people built the earthen structures is the fact that they're still intact. Due to its proximity to the Gulf of Mexico, this area receives immense amounts of rain that makes earthworks especially prone to erosion. Microscopic analysis of soils shows that the Native Americans mixed different types of soil—clays, silts and sand—in a calculated recipe to make the structures stronger.

"Similar to the Roman concrete or rammed earth in China, Native Americans discovered sophisticated ways of mixing different types of materials to make them virtually indestructible, despite not being compacted. There's some magic there that our modern engineers have not been able to figure out yet," Kidder said.

What's even more impressive than how quickly the people built the earthen structures is the fact that they're still intact.

I suspect there are a lot of things about ancient peoples that we dont fully understand.

It interesting to see articles about the native people of this continent.