Marine in Congress burns Trump to the ground over his Robert E. Lee comments

Donald Trump was hilariously mocked by Marine serving in Congress following comments by the former president on the Afghanistan war.Trump, who is marking the 20th anniversary of the 9/11 terrorist attacks by providing commentary during boxing matches at a Florida casino, sent out a statement to repo... 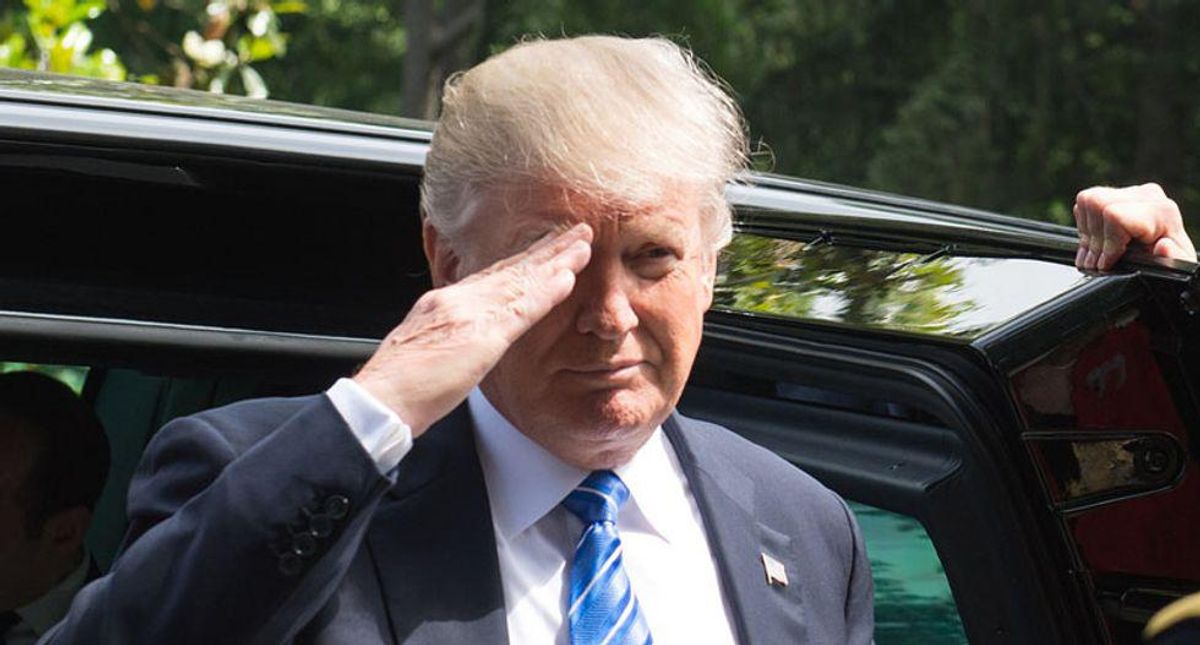 Donald Trump was hilariously mocked by Marine serving in Congress following comments by the former president on the Afghanistan war.

Trump, who is marking the 20th anniversary of the 9/11 terrorist attacks by providing commentary during boxing matches at a Florida casino, sent out a statement to reporters on Afghanistan on Wednesday.

"Robert E. Lee is considered by many Generals to be the greatest strategist of them all," Trump wrote complete with his unusual capitalization. "If only we had Robert E. Lee to command our troops in Afghanistan, that disaster would have ended in a complete and total victory many years ago. What an embarrassment we are suffering because we don't have the genius of a Robert E. Lee!"

But Rep. Conor Lamb (D-PA), who went on to serve in the Marine Corps Reserves after leaving active duty in 2013, offered his thoughts on Trump and Lee.

"I guess Trump & Robert E. Lee both know how it feels to suffer a humiliating defeat at the hands of pro-democracy forces in Pennsylvania," Lamb wrote.

Lamb is running for the U.S. Senate seat being vacated by Sen. Pat Toomey (R-PA), who has announced he is not seeking re-election.

Trump has endorsed Republican Sean Parnell, although Jeff Bartos is also seeking the GOP nomination and says Parnell is "unelectable."

"Robert E. Lee is considered by many Generals to be the greatest strategist of them all," Trump wrote complete with his unusual capitalization. "If only we had Robert E. Lee to command our troops in Afghanistan, that disaster would have ended in a complete and total victory many years ago. What an embarrassment we are suffering because we don't have the genius of a Robert E. Lee!"

Trump made that statement right after the Robert E Lee monument had been removed in Richmond.

Trump's statement is what is known as a racial and political DOG WHISTLE.

I have a strong feeling that if you asked Trump to name the location of one of Lee's great civil war victories Trump would hem and haw and probably make up the name of a town.

"Mr President, what was you favorite Robert E Lee victory? "

"who is marking the 20th anniversary of the 9/11 terrorist attacks by providing commentary during boxing matches at a Florida casino, sent out a statement to repo..."

How long before he does Cameo 'appearances' like Ghouliani?

Imagine if Biden disrespected our current military like Trump does. The right would be calling for his head on a stick.

Ignoring Trump at times like this, which is lets face it every day, is why they are known as deplorables.

He considers anyone who fought for and or died for this country are losers.  He has said so.

Professor Principal
1.2  Ender  replied to  JohnRussell @1    one month ago

I guess the idiot doesn't realize he was putting himself down in that comment, as he was in the top office for four years.

Of course these little tidbits will fly over the heads of him and his supporters.

Trump insulted everyone who served in Afghanistan!

Just watched as a massive crane took down the magnificent and very famous statue of “Robert E. Lee On His Horse” in Richmond, Virginia. It has long been recognized as a beautiful piece of bronze sculpture. To add insult to injury, those who support this “taking” now plan to cut it into three pieces, and throw this work of art into storage prior to its complete desecration.

Robert E. Lee is considered by many Generals to be the greatest strategist of them all. President Lincoln wanted him to command the North, in which case the war would have been over in one day. Robert E. Lee instead chose the other side because of his great love of Virginia, and except for Gettysburg, would have won the war. He should be remembered as perhaps the greatest unifying force after the war was over, ardent in his resolve to bring the North and South together through many means of reconciliation and imploring his soldiers to do their duty in becoming good citizens of this Country.

Our culture is being destroyed and our history and heritage, both good and bad, are being extinguished by the Radical Left, and we can’t let that happen! If only we had Robert E. Lee to command our troops in Afghanistan, that disaster would have ended in a complete and total victory many years ago. What an embarrassment we are suffering because we don’t have the genius of a Robert E. Lee!

Trump says we should remember the good and the bad and then proceeds to say nothing but good about Lee, and also says that removing the statue is removing "our culture".

So there it is, he is a neo-confederate.

Masters Quiet
4  Ronin2    one month ago

Shocker, a TDS driven Democrat going after Trump for a comment on the piss poor leadership shown in Afghanistan.

As for using Lee as a reference. True or false. Rommel is considered one of the greatest military tacticians of all time. Below is a link of 10 of the best military minds ever. Many on the list would not be considered good human beings by any stretch of the imagination.

Despite Democrats efforts- Lee is still considered one of the best US military minds of all time. Seems that some can separate Lee's military prowess- from the fact he served on the wrong side of the US Civil War; and owned slaves.

Conor Lamb chirping in not only shows his rampant TDS; but is also doing a dog whistle. Maybe he should study history a bit more. The only reason that Grant won was due to superior numbers and weaponry at the end of the war. Grant didn't care about how many troops he lost; he sustained battles any general in their right mind would have withdrawn from. He knew that any troops and weapons lost would be rapidly replaced. He didn't earn the nickname "Butcher's Bill" for nothing. Lee didn't have that luxury. By the end of the war he wasn't receiving the needed troops from the southern states; and his weaponry wasn't replaced once it was lost or damaged in battle.

The only reason Grant is still in favor with Historians and the left is that he was on the winning side. He is considered a tactical genius now; but the tactics he used back then would have got him a court martial now.

Professor Principal
4.1  seeder  JohnRussell  replied to  Ronin2 @4    one month ago

Trumps comments about Lee yesterday are a racial dog whistle and a wink and nod to his far right base. Period, end of story, finis.  Trump knows no more about military history than a random 11 year old you could find on the street.

Professor Principal
4.2  seeder  JohnRussell  replied to  Ronin2 @4    one month ago

"If only we had Robert E. Lee to command our troops in Afghanistan, that disaster would have ended in a complete and total victory many years ago.

He had four years to put his own general in there and win the war.

The myth of Robert E. Lee is dead. Trump just helped prove it.

Professor Principal
5.1  seeder  JohnRussell  replied to  Kavika @5    one month ago

Every word of that article you linked, by Ty Seidule , a noted professor of military history at West  Point, and a Robert E Lee scholar, is worthy of reading out loud, but for brevity's sake I will just excerpt a few paragraphs.

In 1861, when Lee chose to resign from the U.S. Army, abrogating his officer’s oath and accepting a commission in the Virginia militia, many condemned his action. In fact, when Lee gathered his Unionist family to tell them of his decision, he reportedly acknowledged they would disagree with him.

Other Virginians also questioned his decision. There were eight colonels in the U.S. Army from Virginia at the time the state seceded. All West Pointers, seven remained loyal. Lee and only Lee chose treason, chose to try to destroy the United States. And in doing so, he chose to fight for a new country dedicated to human enslavement. He certainly understood slavery, having spent more than two years from   late 1857 to early 1860 running the plantation at Arlington , with its around 200 enslaved workers.

Lee fought for slavery because he believed in slavery.

Gen. Ulysses S. Grant destroyed Lee’s army. Yet, Lee remained the most revered figure among white Southerners for the next hundred years. Statues went up to his memory all over the South, including the 1890 gargantuan statue in Richmond. The state of Virginia led the nation in making Lee an American hero.

But the reverence for Lee served a terrible purpose: to further a white supremacist society. It’s time for Virginia — and the rest of America — to move on.

The   UDC controlled textbooks   to ensure Lee was presented in a god-like fashion and the true cause of the Civil War, slavery, was obscured. Among white Americans, the UDC’s view of the war came close to winning, especially after the last Civil War veterans died.

During this time, the white South gained political dominance by rewriting its constitutions to exclude Blacks from political power. Flattering biographies of Lee furthered the lie that the Confederates really didn’t fight over slavery. Incredibly, Lee became a symbol of strength and patriotism for most white Americans during World War I and War II.

... After the war, Lee testified before Congress that if he had the choice, he would force all Black people to leave Virginia, a call for ethnic cleansing. Lee called Black people fit only to serve as a  laboring class with no political rights . Lee’s own words damned him.

Sophomore Guide
6  Thomas    one month ago

Trump, who is marking the 20th anniversary of the 9/11 terrorist attacks by providing commentary during boxing matches at a Florida casino...