A history of the United States, according to statues

community » Discussions » Category » Satire » Discussion » A history of the United States, according to statues

The best people in America (as determined by their fitness for statuary) all fought for something called “the Confederacy."

It is very difficult to learn any history now that they are   taking down the statues . As everyone knows, our history (and heritage) is stored in statues. Knock down one and —   poof! —   all knowledge of the event it commemorates   vanishes like sands from a broken hourglass.

That is why it is so devastating any time a statue comes down, because there is no other way to learn. No, I take it back. Sometimes, you can learn a  little  history from the name of a school or building, or the name attached to one of the days in a long weekend during which there is a mattress sale, but that is the  only  other way. It is very sad, but there it is.

What little we know of the past of this country has been supplied to us exclusively by statues. As far as we can tell from the statue record, America was founded by Washington-Jefferson-Lincoln-Roosevelt, an enormous four-headed rock monster dozens of feet high with every possible permutation of facial hair.

This fearsome creature was president four times, and it would have been president even more times if it hadn’t been for the mysterious decision to sever its phallus from the main body and display it separately in Washington, D.C., where, for some reason, an elevator was placed inside it. It remains a puzzle to historians why the bearded quarter of the rock monster was duplicated and set on a chair in a Greek-style house to stare at the phallus across a body of water.

(One of the non-bearded quarters also has a Greek hut of his own in Washington, but he overlooks a copse of cherry blossoms instead. The reasons for this are very unclear. Possibly he had something to do with the seasons?)

Also involved in this somehow was a woman many, many stories tall who still stands in New York Harbor. We know that she was a big fan of huddled masses yearning to breathe free and that she lifted her lamp beside the golden door (although there is no golden door we can see; possibly its statue did not survive?). Was she the lover of the four-headed president monster? Did she create it and regret her creation? Was she responsible for the ritual severing of its phallus?

There is someone similar to her in general aspect who stands atop the Capitol, and we do not know whether they are relatives, friends, rivals or lovers. There is also a colorful   bearded man   in a cheery plaid shirt with a blue ox who seems to have been responsible for settling much of the country, but the dates of this are impossible to determine. Indeed, between the founding and the present, we know precious little about American history beyond the fact that many, many horses were involved in it, and some of the horses were standing on two or three legs whereas others were on as many as four.

We do know for certain, however, that the best people in America (as determined by their fitness for statuary) all fought for something called “the Confederacy.” Its geographical extent, as marked by flags and statues, remains very unclear. Some findings suggest it extended as far as Maine. As far as the statues of the bearded men on horses tell us, there was no reason   not   to fight for the Confederacy, although, inexplicably, some people seem to have abstained; the causes for the war remain shrouded in mystery.

It is a great source of sorrow to people who love American history that we don’t have any books that could possibly tell us what happened. All we have are the fragments of names and a few dates rendered in Roman numerals (America’s preferred system for math, if its statues are anything to go by, and they are the   only   thing to go by).

If only we could study a document or even a series of documents that tell of the past. If only there were all   kinds   of different documents from which to choose — primary accounts, some conflicting and some not, the accumulations of scholarship over generations, some hagiographies, others critical. If only we had vast amounts of information, accounts of military victories and accounts of social struggles, physical artifacts and photographs and architecture. If only history were something we got to write over and over together, more a palimpsest than a book, with missing stories inserted every day and old ones revised.

Alas, it is too bad there are only statues. But since statues are all we have, it seems that is what we will use.

All the statues in the world are useless compared to just one history book.

LOL seems to be accurate.

I would like to know when we got so lazy.

It seems back in the day people would carve these things out of stone.

Now they just slap a couple of pieces of metal together.

King George III's statue was torn down and turned into bullets, maybe all those 'gentleman' heroes can be turned into something equally useful. Spaghetti strainers?

Professor Principal
4.1  devangelical  replied to  Hallux @4    one month ago

Professor Principal
5  JBB    one month ago

There are also infinite inspirations for public art that are not reminders of hundreds of years of suffering under the yoke of generational human bondage...

Imagine being a taxpaying black person who has to not only drive by such an abomination but also to pay for the maintenance, upkeep and lighting of such a damnable monument to your ancestor's suffering.

Get the F outta here! That shit has gotta go down.

My wife and I visited friends In Lexington, KY decades ago.  I located my home by mentioning that I lived "...35 miles from Gettysburg.  The "Civil War" battle field."  The one friend's acquaintance took umbrage.  So I corrected myself by saying, "Lincoln's war to maintain the union."  That seemed to satisfy the older man.

Gettysburg is still awash in monuments.  Deservedly so. It is still divided geographically.

The exception is for Maryland which celebrates the bravery of both its Union and Confederate soldiers.

The bronze statue is of 2 wounded Marylanders helping one another, one Union, one Confederate, is located on Taneytown Rd.

Robert E Lee & Traveler on West Ave, nearly identical to the one most recently removed from Richmond VA.

Ironically Gettysburg is an hours ride from the heart of PA Amish country where non Amish are referred to as English,

Culturally, we love our guns and statues of the people who used them but Confederate statuary has not been the primary target

of the public's wrath.

This article is a year old but Christopher Columbus was the primary target in 20% of recent cases. Interesting read that needs to be updated.

After a little more reading ...Wiki has a decent compilation.

and a chart about how many have been removed and when. 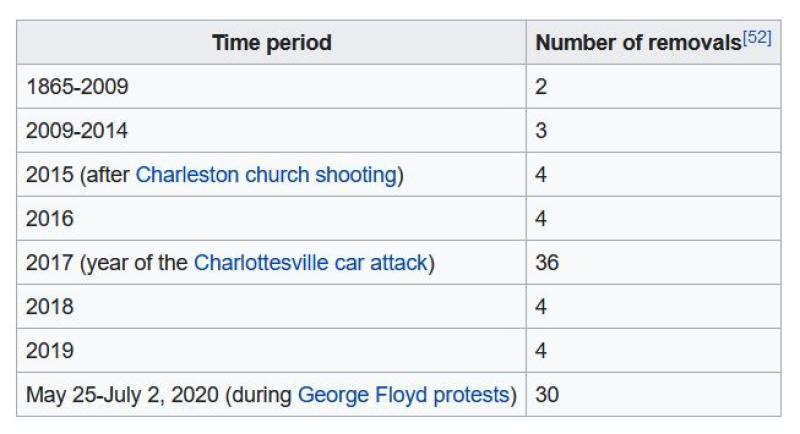