Indefensible Bulk: Steve Bannon needs to be behind bars

Indefensible Bulk: Steve Bannon needs to be behind bars 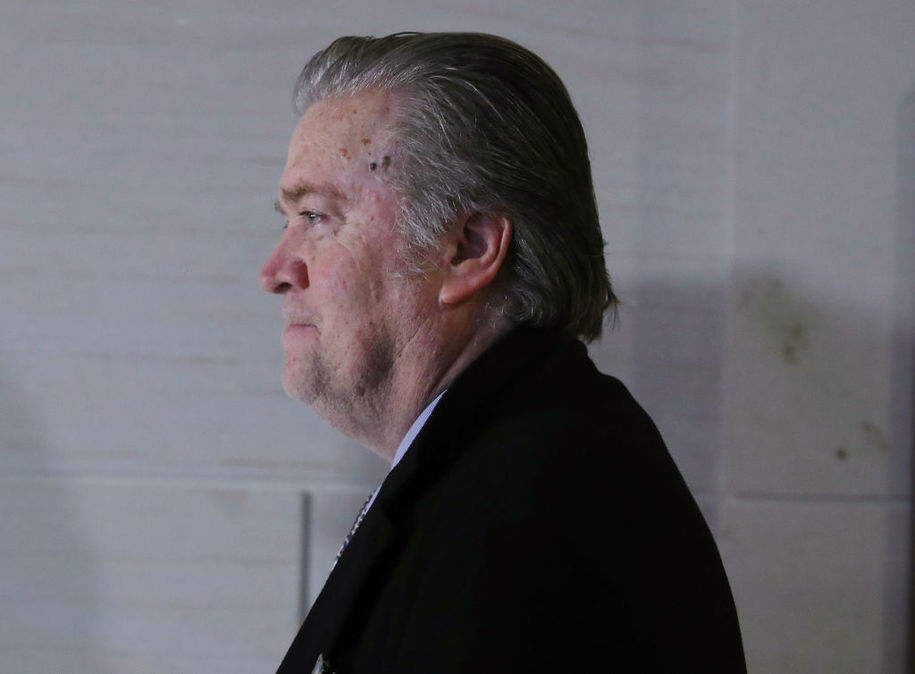 When it comes to events surrounding the Jan. 6 insurrection, there are some whose involvement remains unclear. Did Rep. Lauren Boebert lead future insurgents on a tour of the Capitol in order to help them identify the shortest route to the people they wanted to hang? Not certain. There are others who will pretend that their calls to storming the Capitol and spilling a swimming pool of patriotic blood were purely metaphorical. Right, Rep. Mo Brooks?

And then there’s Steve Bannon.

The Trump campaign chair, shining with the glow of his last-minute pardon from the   fraud he definitely committed , didn’t just assist a few would-be Mike Pence-hangers. He didn’t just get up there and sound the horn to get out there and fight like there was nothing but a commie-filled America-free tomorrow. He worked to create both the political crisis and the maddened crowd that placed the United States within a few seconds, and a handful of steps, of seeing members of Congress marched to a gallows on the Capitol lawn.

On Friday, Bannon was the undoubtedly   proud recipient of one of the first four subpoenas   handed out by the House Select Committee. However, giving the head of a Brussels-based fascist movement—tastefully called “ The Movement”—a couple of weeks to decide whether he wants to make an appearance before a Congress he dismisses, or a court system he sneers about, seems like far too mild an approach.

Here’s a checklist of “fun” Steve Bannon moments, over just the last couple of years.

But that’s just the   small   stuff. Because Bannon’s involvement in the events around Jan. 6 easily trumps (yes, pun intended) even trying to abscond with an 800-year-old monastery as a base for bringing down the Catholic church and creating baby Hitlers.

To a large extent, the whole idea of using Jan. 6 as a lever to tip over democracy came from Bannon. As the recent book   Peril  reported, Bannon called up Trump on Dec. 30 and told him, “'You've got to call Pence off the f**king ski slopes and get him back here today. This is a crisis.”

The point of dragging Pence back—which happened—was to explain how Jan. 6 could be turned into “a reckoning.” Bannon explained to Trump how upsetting the prescribed process on Jan. 6 could “cast enough of a shadow over Biden’s victory” that it would cause millions of Americans to consider Biden an illegitimate president. They didn’t actually have to prove any election fraud. They only had to create a spectacle that would destroy faith in the system.

But it doesn’t take going to the pages of a book to discover Bannon’s involvement in the attempted overthrow, because Bannon himself just keeps talking about it.

Bannon met with Trump and Rudy Giuliani in advance of the insurgency, with an open goal of destroying the American government.

As  Newsweek   reports, Bannon’s open admission is that he told the others “ it's time to kill the Biden presidency in the crib." On his podcast platform, Bannon went on to brag about the success of his plan, claiming that “42%  of the American people think that Biden did not win the presidency legitimately”—a belief supported by the actions on Jan. 6 to deliberately undermine that presidency.

As professor   Lawrence Tribe   points out. “ It’d be hard to justify DOJ inaction in the face of this rapidly mounting evidence of a criminal conspiracy to commit sedition against the US Government and to give aid and comfort to an insurrection. See 18 USC secs. 2383 & 2384.”

Tribe’s name has recently been in the news because Trump attorney John Eastman  distorted Tribe’s past statements in his attempt   to declare Trump the “winner”   by simply leaving off as many Biden states as it took to get the numbers they wanted. But there’s no misinterpreting what Tribe is saying here:

Bannon, Trump, Giuliani, Eastman … they all engaged in a seditious conspiracy, a plan that Bannon spelled out with the declared intent of destroying the lawful government of the United States.

It’s worth noting that, in their schemes, neither Bannon nor Eastman even attempted to make a case that Trump had actually won, or that there had been anything like the level of fraud Giuliani was claiming. Both plans were simply to cripple the United States by creating confusion and distrust.

It’s almost what you might expect from someone   who said this:

“Lenin wanted to destroy the state, and that’s my goal too. I want to bring everything crashing down, and destroy all of today’s establishment.”

It’s past time to stop sending Steve Bannon subpoenas and start sending him to jail. Let Eastman fight with Giuliani over who has be his cellmate.

Daily Kos is the country's largest progressive, independent news and activism hub. We don't have billionaire backers like some right-wing media outlets. Half our revenue comes from readers like you, meaning we literally couldn't do this work without you.   Can you donate $3 right now to help Daily Kos keep fighting?

I think Trump should be Bannon's prison bitch.