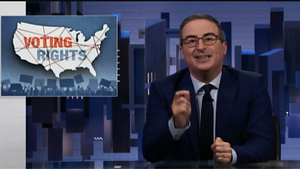 The main story on "Last Week Tonight's" first show of the season called the GOP's bluff on their voter suppression laws.

State Rep. Matt Schaffer, a Republican from Tyler Texas went on television to tell people upset over the GOP's voter suppression bill to "read the bill. There's no voter suppression. Read the bill and show me what person who is eligible to vote who will not be able to vote. You can't find it."

So, that's what John Oliver did. In fact, his staff read all of them. While Schaffer wants the name of a person in the bill who can't vote like Brian or Steve, what is in the bill is barrier after barrier specifically targeting Democratic voters in Democratic areas of the Republican-run state of Texas.

In particular, the bill in his state gets rid of any 24-hour ballot drop boxes that were put in place during the pandemic so people didn't have to risk their lives to cast a ballot. The precincts where those were used the most proved that 56 percent of the people who used those methods of voting were people of color. The "drive-through voting," which let people drive to the polling place and vote from the safety of their car, was extremely popular as well with 53 percent of the users being people of color.

Oliver went on to show absurd debate discussion where the state House speaker, Texas Rep. Dade Phelan, banned the use of "racism" from the floor when debating the racist voter suppression law that targeted people of color.

Arizona Republican state Rep. Travis Grantham was so triggered by a Democrat alleging that the GOP didn't want "colored people" to vote. After being called out for his use of the term "colored people," he moved to "protect" his tweets from the public.

"Oh, f*ck all the way off," Oliver said in response to his complaint while reading a rule book.

So, when Matt Schaffer says to point to the person who won't be able to vote, those groups in Harris County are pretty specific.

Oliver then moved to Georgia state Sen. Burt Jones, who told CNN that voting is a "privilege" that "you can put forth a little bit of effort trying to cast your ballot." The reporter explained that voting was a "right" in America, not a privilege. Jones, who embraces QAnon conspiracies, is now running for lieutenant governor of Georgia.

A North Carolina voter suppression bill moved to mandate that the voter I.D.s that could be used were the ones almost exclusively used by white people. The court, in that case, ruled that the bill aimed to "target African Americans with almost surgical precision..."

Even in the case of Arizona, the Republicans held a partisan audit, run by a supporter of former President Donald Trump and ultimately found that Trump lost by more than 300 votes than initially thought. The audit proved that Trump was an even bigger loser than they knew before. Still, the Arizona Republicans passed laws to restrict voting rights to "protect" against the fraud they couldn't find.

Oliver closed by telling Joe Biden that this should be the only thing that matters because if people can't vote Democrats will continue to lose up and down the ballot. At the same time, Black activists who are fighting against these feel abandoned by a president who was supposed to be on their side.

yes, some of us have a very limited ability to handle the bullshit people try to tell us.

What''s suppressive about any of these bill's?

In particular, the bill in his state gets rid of any 24-hour ballot drop boxes that were put in place during the pandemic so people didn't have to risk their lives to cast a ballot. The precincts where those were used the most proved that 56 percent of the people who used those methods of voting were people of color. The "drive-through voting," which let people drive to the polling place and vote from the safety of their car, was extremely popular as well with 53 percent of the users being people of color.

This article is all over the place. The only info I find in the article about voting in Texas is what I block copied above.

So the bill gets rid of the 24-hour drop boxes. They only allow one drop off box per location and per the new rule in order to drop off an absentee ballot in person the person must now show ID. But from what I read they can still mail in their absentee ballots?  If true then how does this really prevent those people from voting?

I don't necessarily agree with getting rid of the drop boxes but I do think it would be a good idea to have them in public offices where some sort of eye can be kept on this.

As for the drive-thru voting, other than the cost I don't see any real harm in that. Not sure why the new law does away with this. But again, how does it prevent a person from voting?

So while the article does lay out some voter suppression which in this case is discouraging groups of people from voting, were there more drop boxes in black or democratic areas than republican areas?  Were the drive-thru sites located more where blacks live and vote or all over?  TBH I don't see this as much of voter suppression and more going back to how voting was carried out pre-pandemic. Personally I think the arguing over this is more partisan politics then real suppression.  The overall impact seems fairly small to me.