Former Nazi death camp secretary, 96, found after going 'on the run' on day of trial | Euronews

Former Nazi death camp secretary, 96, found after going 'on the run' on the first day of her trial. 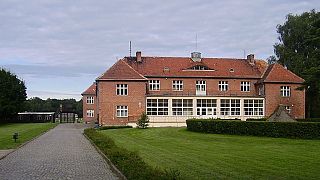 A former Nazi concentration camp secretary, 96, has been found after going "on the run" on the day her trial was due to start, a court said on Thursday.

Irmgard Furchner, who was between 18 and 19 years old at the time of the events and lives in a home for the elderly near Hamburg, was to be tried by a special youth court for "complicity in murder in more than 10,000 cases", according to the prosecution.

She is accused of participating in the murder of inmates in the Stutthof concentration camp in present-day Poland, where she worked as a typist and secretary to the camp commander, Paul Werner Hoppe, between June 1943 and April 1945.

But the president of the court in Itzehoe said on Thursday morning "the accused is on the run", adding an arrest warrant has been issued.

"She left her (elderly) home this morning. She took a taxi," said a spokeswoman for the Itzehoe court, Frederike Milhoffer.

The spokeswoman confirmed later on Thursday the suspect had been "found", but it wasn't immediately clear if the trial would go ahead.

"I can say that the defendant has been found...a doctor will establish her capacity to be detained and the court will determine whether the arrest warrant can be executed or whether she is spared," she said at a press briefing.

She is the only woman to be tried in Germany for involvement with the Nazis in decades.

Irmgard Furchner, who was between 18 and 19 years old at the time of the events and lives in a home for the elderly near Hamburg, is to be tried by a special youth court for "complicity in murder in more than 10,000 cases", according to the prosecution.

The prosecution accuses her of participating in the murder of inmates in the Stutthof concentration camp in present-day Poland, where she worked as a typist and secretary to the camp commander, Paul Werner Hoppe, between June 1943 and April 1945.

In this camp near the city of Gdansk, where 65,000 people perished, "Jewish inmates, Polish partisans and Soviet prisoners of war" were systematically murdered, according to the prosecution.

The trial at a court in Itzehoe, northern Germany, will be followed a week later by the trial of a 100-year-old former Nazi camp guard at Sachsenhausen, near Berlin.

Never before has Germany tried such elderly former Nazis.

The case also comes on the eve of the 75th anniversary of the Nuremberg tribunal's sentencing to death by hanging of 12 of the Third Reich's top leaders.

According to lawyer Christoph Ruckel, who has represented Holocaust survivors for years, Irmgard Furchner "kept all the correspondence of the camp commander".

"She also typed up the execution and deportation orders and initialled them," he said on the regional public broadcaster NDR.

After a lengthy procedure, the court ruled in February that the nonagenarian was fit to appear in court despite her advanced age.

But the hearings, scheduled to last until June 2022, should be limited to a few hours per day.

Eight cases involving former employees of the Buchenwald and Ravensbruck camps in particular are currently being examined by various German prosecutors, the Central Office for the Investigation of Crimes of National Socialism told AFP.

In recent years, several cases have had to be dropped due to the death of suspects or their physical inability to be brought to court.

But while Germany has convicted four former guards or accountants at the Nazi camps of Sobibor, Auschwitz and Stutthof in the past decade, it has tried very few women involved in the Nazi machinery, historians say.

At least three other women employed in Nazi camps were tried, including another secretary who worked at Stutthof, but she died last year before the case was completed.

The public prosecutor's office in Neuruppin, near Berlin, is examining the case of another woman who worked in the Ravensbruck camp, according to the Ludwigsburg-based central office.

Some 4,000 women served as guards in the concentration camps, according to historians. But few were tried after the war.

Among those who did answer for the abuses committed during the Third Reich was the Auschwitz-Birkenau extermination camp guard Maria Mandl, nicknamed "the ferocious beast", who was hanged in 1948 after being sentenced to death by a court in Krakow.

Between 1946 and 1948, in Hamburg, 38 people, including 21 women, appeared before British military judges for having served in the Ravensbruck concentration camp, which was specially reserved for women.

The 2011 sentencing of John Demjanjuk, a guard at the Sobibor camp in 1943, to five years in prison, set a precedent making it possible to prosecute for complicity in tens of thousands of murders any concentration camp aide, from the guard to the accountant.

I have a hard time seeing the value of a prosecution like this. I get that people hate Nazis and all that, but we’re talking about a girl who, at 18, was likely told to type or be shot in the head. What was she supposed to do?

And then what is the government doing to do now? Put a 96 year old woman in prison? Execute her?

I don't believe Germany has a death penalty. But if she is tried, I think she should just spend the rest of her days at her nursing home

I am not in favor of putting 96 year old people in prison, no matter what they have done.  Maybe house arrest, but even that sounds a little extreme. The woman has lived with her guilty conscience all these years, that is her punishment.

Even though I think these people deserve to be punished, I see no point in putting this old woman in jail now.  She had to live with this disgrace all her life. She should feel guilty.