Biden's Red Queen justice: How he destroyed both the investigation and the reputation of border agents

community » Discussions » Category » News & Politics » Discussion » Biden's Red Queen justice: How he destroyed both the investigation and the reputation of border agents

The the "whipping" story was entirely untrue. It was obviously untrue from the start. Even the photographer expressed astonishment.

"Those people will pay." With that promise, President Biden vowed to punish Customs and Border Protection agents accused of whipping undocumented immigrants on the southern border. Despite the announcement of an investigation into the allegation just the day before, Biden did not stop for the pretense of process in declaring the agents guilty.

This "sentence first - verdict afterwards" approach may amuse the Red Queen of Alice in Wonderland, but it should be anathema to an American president. Not only did Biden shatter his own administration's investigation but he joined other leading Democratic figures in defaming the agents.

Biden told the American people that these easily identifiable officers would be punished after they allegedly "strapped" the Haitian migrants. Other Democratic politicians like Rep. Maxine Waters (D-Calif.) declared that the whipping was "worse than what we witnessed in slavery," while Rep. Ayanna Pressley (D-Mass.) called it "white supremacist behavior." Many in the media went into high gear, too, denouncing what one outlet described as the "Whipping (of) Haitian Asylum Seekers."

However, Biden's behavior was the worst, due to his position as head of the Executive Branch: "It was horrible what - to see, as you saw - to see people treated like they did: horses nearly running them over and people being strapped. It's outrageous. I promise you, those people will pay."

By announcing that the agents were guilty and needed to be punished, Biden destroyed the credibility of the Department of Homeland Security's ongoing investigation. It is akin to what is called "command influence" in the military, when comments or actions of a superior officer influence an investigation or prosecution. Investigators and department officials could well be worried about their own careers if they do not find a basis to punish one or more of the border agents. The failure to do so would be an embarrassment to the president and risk the wrath of powerful figures in Washington. Conversely, any action taken against these agents can now be challenged due to Biden's preemptive declaration.

The biggest problem is that the whipping story was entirely untrue.

Indeed, it was obviously untrue from the start. We were all watching the same video, and the officer was clearly using his strap to control his skittish horse. Even the photographer expressed astonishment at the coverage and said he did not see a single person strapped or whipped by agents.

The profile of this scandal is familiar. The media repeatedly has worked people into a frenzy over stories that eventually were proven false, but with little later coverage when the truth contradicted earlier accounts. One such example is the Lafayette Park incident in 2020, in which the media declared that then-Attorney General Bill Barr cleared the area with tear gas to enable a photo op for President Trump. From the outset, there was ample evidence undermining that claim, but it was uniformly ignored. Later, the Justice Department's inspector general disproved the claim - but few reporters or commentators corrected the earlier false claims.

Biden and other figures ran with this false claim because it was popular - and they did not have to bear the costs. They simply declared the border agents to be modern-day Bull Connors, whipping helpless migrants.

Legally, however, this has all of the makings of a defamation case.

The most important element is that all of the whipping stories were based on the same videotape; there were no added sources for most of these accounts. Even if these officers were treated as "public officials" under the more difficult standard of New York Times v. Sullivan, they could still make a compelling argument that the comments were made with the "actual knowledge" of the falsity or "reckless disregard of the truth." Moreover, these claims would be recognized in many states as per se defamation. While some can legitimately argue that the use of the horses was still abusive or dangerous, horses are routinely used for crowd control and these border agents were ordered to the river for that purpose.

Congressional members like Waters and Pressley can often rely on the protections of the Speech or Debate Clause of the Constitution (Article I, Section 6, Clause 1). However, their remarks in this case were made outside of protected congressional areas.

Those in the media might limit their legal liability with corrections posted or published within a few days of the initial reports - but they can still be sued. It could be argued that some apparently did not care if the border agents did or did not whip migrants because "it was a fact too good to check." Moreover, the use of the still photos was uniformly misleading and could be used as the basis for "false light" charges, in which pictures are used to present a false or misleading image.

The greatest irony, however, is that the person most at fault here - President Biden - may be the most protected from lawsuit, despite defaming federal employees. In Nixon v. Fitzgerald, the Supreme Court held that a president "is entitled to absolute immunity from damages liability predicated on his official acts." The court recognized that "a President must concern himself with matters likely to 'arouse the most intense feelings'" and thus would be subject to endless lawsuits. Later, in Clinton v. Jones, the court denied such immunity in private matters involving "unofficial conduct."

Biden can argue that these were statements issued in his official capacity. Of course, that makes it worse, since he is not supposed to proclaim the guilt of those who are being investigated or who remain unadjudicated.

The danger is that defamation actions often chill speech on issues of public importance. The Supreme Court has struggled to find a balance in such cases in order to limit defamation actions to guarantee free, robust public debates. It is important for people to be able to allege abuses by law enforcement. Conversely, responsible presidents and members of Congress are expected to reaffirm the need for investigations and due process.

What is notable here is that the truth could have been confirmed easily before any political or media figures portrayed the border agents as white supremacists in a race-fueled whipping frenzy.

In the end, we might all agree with President Biden that "it was horrible what you see, what you saw - to see people treated like they did." But that should include federal agents who were sentenced to officials' public condemnation before any verdicts were reached.

Jonathan Turley is the Shapiro Professor of Public Interest Law at George Washington University. You can find his updates on Twitter @JonathanTurley.

Joe really stepped on his own pecker in this matter.

He had lots of help from the media, too.

Waters and Pressley should have kept their traps shut, too, at least until they got the facts.

Why let the truth get in the way of a great lie for political gain. Race baiters like Waters, Pressley, and others certainly did not let it. Those agents deserve apologies from those people but it will certainly never happen. Disgusting!

No one was assaulted. You have been duped by the media and members of the Biden Admin.

The real question is why you are now CHOOSING to remain duped when the evidence is clear.

I can hardly believe you are still falling for this!

They also use them for patrol and crowd control

Agents in Border Patrol’s horse patrol program are tasked with working in “challenging terrain, environmentally protected, and privately owned sensitive geographic locations"
“The Horse Patrol are the most viable, and, in some cases, the only option for the U.S. Border Patrol to enter into regions inaccessible by any other means of patrol, such as 4x4 vehicles or All-Terrain Vehicles (ATVs). Without the Horse Patrol, these areas would remain unpatrolled and susceptible to transnational criminal activity,” CBP’s website states.

Indeed, it was obviously untrue from the start. We were all watching the same video, and the officer was clearly using his strap to control his skittish horse. Even the photographer expressed astonishment at the coverage and said he did not see a single person strapped or whipped by agents.

Try reading the thread before you make any comments. 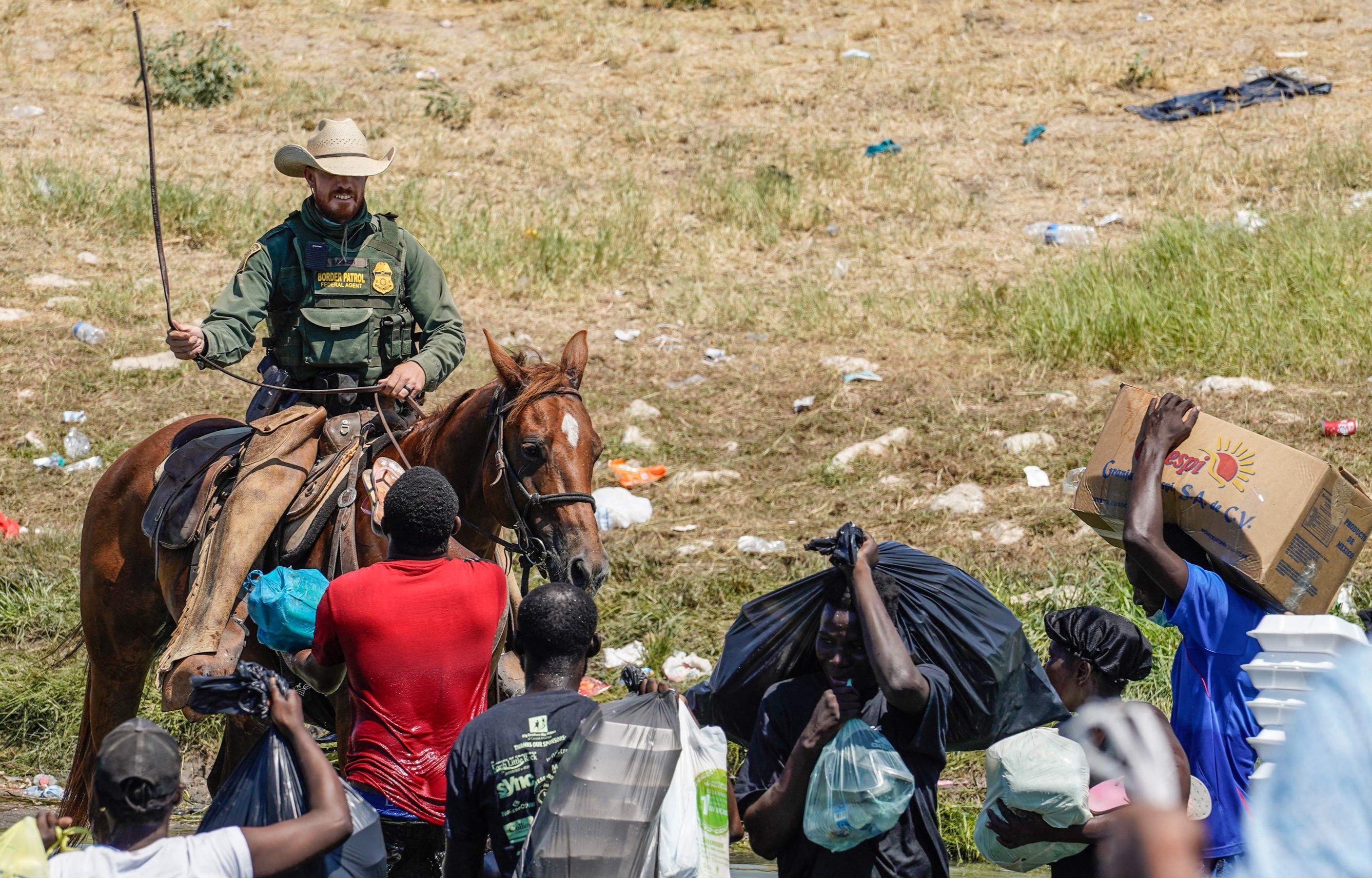 Yep, no one whipped!

It's Biden's fault he's there.

You got that right

Conversely, responsible presidents and members of Congress are expected to reaffirm the need for investigations and due process.

Arguably, when a president declares someone guilty and in need of punishment without due process, he has violated his oath to support and defend the Constitution. That might be worthy of impeachment. Certainly, we have gone down that road for less.

I, too, support enforcement of our immigration laws.

Pity so many don't nowadays.

It’s good that Governor Abbott will hire anyone Biden punishes over this issue.

Biden can argue that these were statements issued in his official capacity. Of course, that makes it worse, since he is not supposed to proclaim the guilt of those who are being investigated or who remain unadjudicated.

Reminds me of the 'terrorist' bombed in Kabul .. yep Biden, that bad guy def paid!

What is notable here is that the truth could have been confirmed easily before any political or media figures portrayed the border agents as white supremacists in a race-fueled whipping frenzy.

Truth no longer has a place .. sensationalism sells .. there is a supremacist hiding around every corner just ask the media.

Maybe Biden should use a sharpie and change the ropes into shoelaces but who would ever alter something with a sharpie....oh wait.

Trump in no way excuses Biden's lying, incompetence, and shear utter stupidity. He prejudged the border patrol and has been proven to have been wrong about it repeatedly. Those agents should sue his ass, and the other Democrats the joined in on the lie, for slander and liable. Maybe if the Democrat's wallets are considerably liter they will learn to shut the hell up before rushing to judgement before all the facts are out.

Maybe Biden should use a sharpie and change the ropes into shoelaces but who would ever alter something with a sharpie....oh wait.

Maybe instead of taking lessons from his former President, he could have waited for the FACTS to come out before declaring people he doesn't even know guilty.