In the worst showing since becoming president, President Joe Biden's approval has fallen to its lowest ever, and the public no longer feels his team is competent, honest, or led well.

In the worst showing since becoming president, President Joe Biden's approval has fallen to its lowest ever, and the public no longer feels his team is competent, honest, or led well.

As Biden struggles to recover from the bungled Afghan withdrawal and an interparty feud over his spending and tax agenda, his approval has sunk to just 38% in the latest Quinnipiac University Poll. A majority, 53%, disapprove.

The survey follows a similar pattern in other polls, notably Gallup, that recently had his approval at a poor 43%.

While partisanship remains as strong as it was during the Trump era, independents are weighing in heavily against Biden. By nearly 2-1, independents disapprove of Biden, 60%-32%.

Of special note in the new survey, the public appears to have lost faith in Biden's abilities. According to the survey:

"Battered on trust, doubted on leadership, and challenged on overall competency, President Biden is being hammered on all sides as his approval rating continues its downward slide to a number not seen since the tough scrutiny of the Trump administration," said Quinnipiac University polling analyst Tim Malloy.

Going to be tough for Biden to win reelection with these sinking poll numbers.

No way he can win with such low numbers from independents.

I wouldn't be surprised if after the midterms his numbers fall abysmally again.

That sometimes happens when your Party loses control. 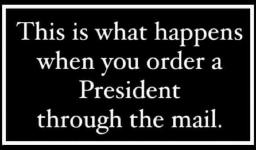 Mail in has it's consequences LOL

At least this shows we are moving in the right direction. People are waking up, removing the blinders, and recognizing this Administration as the disaster it is.

Next year, we shackle this Administration completely.