Manchin and Sanders have clashed in public statements amid divisions among Democrats around the $3.5 trillion infrastructure and social spending bill.

Manchin and Sanders briefly spoke to reporters outside the U.S. Capitol Building on Monday and suggested they could be on the path to reaching an agreement over the proposed $3.5 trillion Build Back Better Act.

The senators have clashed in public statements about the social spending bill in a feud that has reportedly caused concern for congressional Democrats as they work to pass Biden's domestic agenda.

In a video shared to Twitter by NBC News' reporter Frank Thorp V on Monday, Sanders appeared to suggest the talks could be successful.

Manchin placed his arm on Sanders' shoulder as photographers took photos and said: "Get a picture of us, huh? We're talking."

The senators then walked toward their nearby vehicles and Manchin could be heard to say: "Never give up, Bernie" as he seated himself in a truck.

Manchin's vote is essential if Democrats hope to pass the Build Back Better Act in the evenly divided Senate. The bill is set to be passed using the budget reconciliation process, which will not require Republican support.

However, Manchin will need to vote for the bill along with Senator Kyrsten Sinema (D-AZ). Both senators have said they are opposed to the $3.5 trillion price tag, while Manchin appeared to score a victory over progressive Democrats at the end of last week regarding a climate change measure in the bill.

Sanders appeared to hit out at Manchin in an op-ed published in West Virginia's largest newspaper, the Charleston Gazette-Mail, on Friday where he urged passage of the Build Back Better Act and pointed to the threat from climate change.

The Vermont senator mentioned by name Manchin toward the conclusion of the article and noted his opposition to the bill.

"Poll after poll shows overwhelming support for this legislation. Yet, the political problem we face is that in a 50-50 Senate we need every Democratic senator to vote 'yes.' We now have only 48. Two Democratic senators remain in opposition, including Sen. Joe Manchin," Sanders wrote.

Manchin responded to Sanders' op-ed in a statement posted to Twitter, saying: "This isn't the first time an out-of-stater has tried to tell West Virginians what is best for them despite having no relationship to our state."

It remains to be seen if Sanders and Manchin will reach a formal agreement on the Build Back Better Act, especially while progressives in the House of Representatives are opposed to cutting back the proposed spending and could potentially vote against a reduced package. 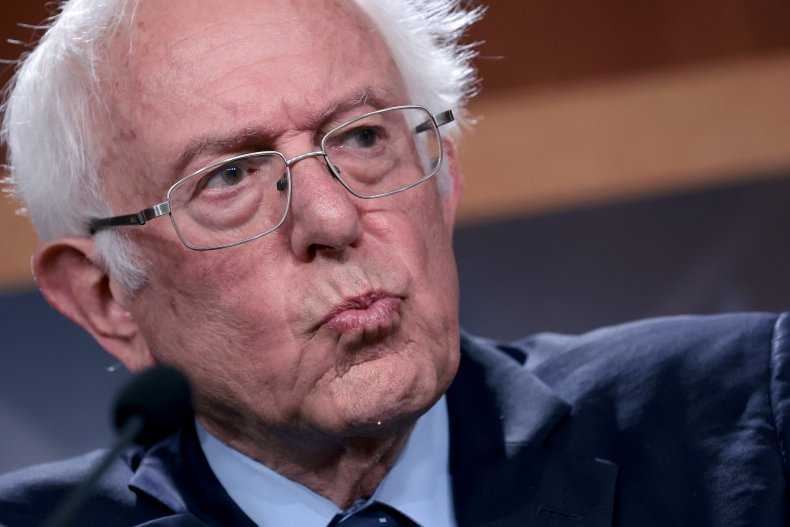 Maybe Manchin is realizing he has been paving the way for Trump to come back , and like Kurtz in Apocalypse Now is mumbling "the horror" to himself.

Sinema is committing political suicide, but that may be ok with her. Her angle appears to be to leave politics and get rich as a corporate lobbyist.

I think you seriously underestimate Sinema.

Professor Principal
1.1.1  seeder  JohnRussell  replied to  evilgenius @1.1    one month ago

Well, she has a veto , so to speak, if that is what you mean.

If she derails this bill she will be primaried by a Democrat in her next election and lose.

Not so sure of that.  Arizona is still more moderate and liberal and more conservative than liberal.  Time will tell.

If she derails this bill her political career is over.

Here are some poll ratings I found for both Sinema and Manchin - note that while Sinema is down with Dems, her all AZ rating is higher than Biden's - 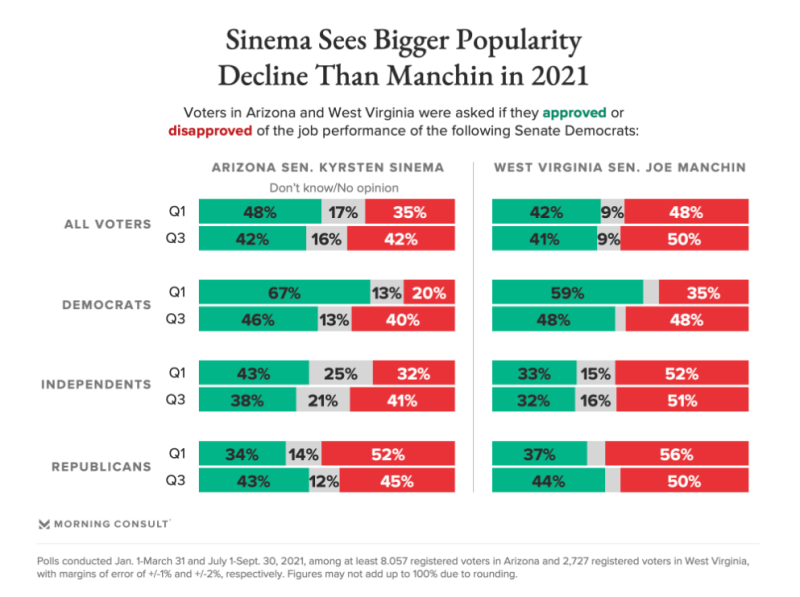 What will determine if she retains here chair or not will be who runs against her next. Currently there are no primary challengers named.

Currently there are no primary challengers named.

Any challengers will wait to see what happens with this bill. Sinema isnt up for re-election until 2024. If she blows up the Biden agenda she will be targeted for defeat by the Democratic Party in the 2024 primary.

I think some people seriously underestimate both Sinema and Manchin....both of whom are people of principle and conviction.

...both of whom are people of principle and conviction.

I wouldn't go that far. There is plenty of evidence tarnishing any principles and convictions on both politicians.

That can be said of any politician, especially Democrats.

That can be said of any politician

So why say differently above?

Junior Quiet
2  Snuffy    one month ago

And maybe Sanders is doing what politicians do by saying they are making progress.  What is he supposed to say, that they have hit a wall and cannot get the bill passed?  We won't know until the bill is passed and signed.  In the mean time I do wish they would pass the bi-partisan infrastructure bill now.  At least that one has some physical infrastructure that has been kicked down the road so long that the pieces are really needed.

Professor Guide
2.1  evilgenius  replied to  Snuffy @2    one month ago

Dems need to show moderates a win soon or they may start hemorrhaging support.