Bush, of Missouri, made the comment Monday after Manchin, of West Virginia, again said he could not support Biden's Build Back Better bill, citing its cost despite it being scaled back from roughly $3.5 trillion to $1.75 trillion.

"Joe Manchin does not get to dictate the future of our country," Bush said in a statement.

Manchin argues the so-called "human infrastructure" package will drive the country into economic crisis, considering the amount of proposed government spending combined with inflation, the growing national debt and social spending programs on the brink of insolvency.

"How can I in good conscience vote for a bill that proposes massive expansion to social programs when vital programs like Social Security and Medicare faces insolvency and benefits could start being reduced as soon as 2026 in Medicare and 2033 in Social Security? How does that make sense?," asked Manchin, prompting the Bush backlash.

"Throughout the last three months, I've been straightforward about my concerns that I will not support a reconciliation package that expands social programs and irresponsibly adds to our $29 trillion in national debt that no one seems to really care about or even talk about," he continued.

"Nor will I support a package that risks hurting American families suffering from historic inflation. Simply put, I will not support a bill that is this consequential without thoroughly understanding the impact that it'll have on our national debt, our economy, and most importantly, all of our American people."

Said Bush: "Joe Manchin's opposition to the Build Back Better Act is anti-black, anti-child, anti-woman and anti-immigrant. When we talk about transformative change, we are talking about a bill that will benefit black, brown and Indigenous communities."

The freshman congresswoman also said those communities are also overwhelmingly excluded from the bipartisan, $1.1 trillion infrastructure bill awaiting final passage in the House.

"We cannot leave anyone behind," Bush, a progressive, also said. "Senator Manchin must support the Build Back Better Act."

Manchin responded: "It's obvious compromise is not good enough for a lot of my colleagues in Congress. It's all or nothing and their position doesn't seem to change unless we agree to everything."

Yup, that time has arrived.....Time to call Manchin a "racist!"

Improve your accuracy if you can.

Care to offer a link supporting your revised quote?

"anti-black, anti-child, anti-woman and anti-immigrant." Improve your accuracy if you can.

All of that is racist according to the left.  And there are many 'identities' missing from the list.

Care to offer a link supporting your revised quote?

Uh, it's in the first sentence of the seed article.

The right wing article chose to cherry pick "anti-black" out of her quote and put that in the headline, when she also said , in the same breath, that Manchin is anti woman, anti child, and anti immigrant as well.

Race baiting by the seed? Yep.

The right wing article chose to cherry pick "anti-black" out of her quote and put that in the headline, when she also said , in the same breath, that Manchin is anti woman, anti child, and anti immigrant as well.

Yes, Bush was wrong about a whole lot of things.

All in the name of progressive liberal policies destined to break us.

You really have to consider the source here.

A member of the Squad/

Who cares what the idiot calls Manchin?

She is fucking delusional.

Surprised it took this long?

When all else fails resort to "You're a racist".

I'd ask how stupid can the Democrats get but they seem to take it as a challenge.

Some of them are telling us that there are tens of millions of racists in America. I wonder how they know that?

BTW, what a rational human being Bush apears to be:

Some of them are telling us that there are tens of millions of racists in America.

There are somewhere in the neighborhood of 200 million white people in America. If even 20% of them are somewhat racist (or more than somewhat) that would be tens of millions.  That is a conservative figure.

Most Americans Oppose White Supremacists, But Many Share Their Views: Poll

A new poll in the wake of the violence in Charlottesville, Virginia, finds that while Americans widely say they oppose racism and white nationalism, many still appear to hold far-right, white supremacist views.

The  Ipsos poll , for Thomson Reuters and the University of Virginia Center for Politics, was conducted online from Aug. 21 to Sept. 5 ― in the weeks following the deadly  white supremacist rally  in Charlottesville. It sampled around 5,360 American adults, asking questions about race that respondents could agree or disagree with to varying degrees.

“W hile there is relatively little national endorsement of neo-Nazis and white supremacists,” according to  the release  describing the poll’s findings , “there are troubling levels  of support for certain racially-charged ideas and attitudes frequently expressed by extremist groups.”

While the vast majority of Americans polled expressed support for racial equality when asked in so many words ― 70 percent strongly agreed that “all races are equal,” and 89 percent agreed that all races should be treated equally ― people’s responses got murkier when it came to expressing their viewpoints on particular issues related to race and extremism.

“Thirty-one percent of Americans polled strongly or somewhat agreed that 'America must protect and preserve its White European heritage.'”

For instance, while only 8 percent of respondents said they supported white nationalism as a group or movement, a far larger percentage said they supported viewpoints  widely held by white supremacist groups :  31 percent of Americans polled strongly or somewhat agreed that “America must protect and preserve its White European heritage,”  and 39 percent agreed that “white people are currently under attack in this country.”

“The poll results do show both an American public that overwhelmingly rejects racist affiliations and movements but at the same time is more tolerant of racially insensitive positions,” Kyle Kondik, communications director at the University of Virginia Center for Politics, told HuffPost.

“The results may be what you might expect from a country that is arguably defined by racial conflict,” he added. “And one that can vote for an African-American for president who ran on unity less than a decade ago, and then turn around and vote for a vehemently anti-immigrant candidate who exploited white grievances just last year.” 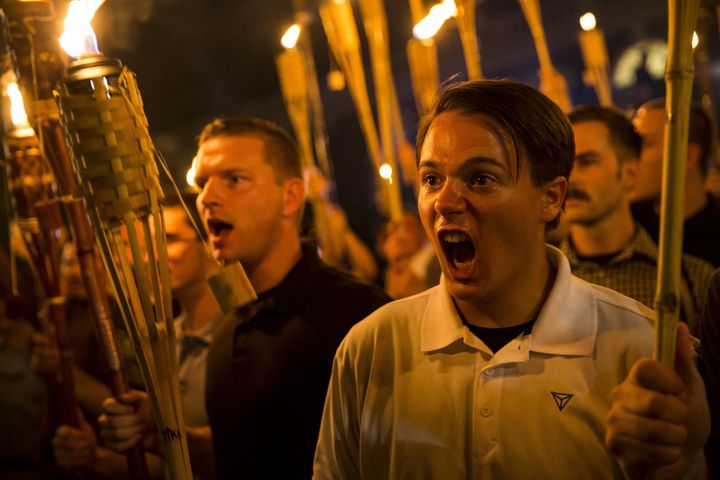 Neo-Nazis and white supremacists hold torches and chant at counter-protesters after marching through the University of Virginia campus in Charlottesville, Virginia, on Aug. 11, 2017.

The poll addressed several hot-button issues surrounding racial justice in America ― and in many cases, the majority of respondents seemed to agree with more conservative viewpoints.

Touching on recent heated debates surrounding  free speech versus hate speech , the poll found a majority of Americans (59 percent) agreed with the statement that “‘political correctness’ threatens our liberty as Americans to speak our minds,” a view often  touted by conservative leaders  ― including  President Donald Trump .

Even support for interracial marriage ― 50 years after the landmark Supreme Court decision  Loving v. Virginia  ― isn’t as widespread as one might think: Around 1 in 6 Americans, or 16 percent, strongly or somewhat agreed that “marriage should only be allowed between people of the same race,” while 65 percent of Americans disagreed.

As NAACP Legal Defense Fund staffer Janai Nelson  told HuffPost  last month :  “Calling out extremists, white supremacists, neo-Nazis is an important but very low bar for where we should be as a society at this stage in our democracy.”

“What we should be [having] is a much more nuanced and deepened understanding of how those ‘isms’ manifest in policy, in systems, in a cloak of oppression that still lives with us,” Nelson said.

Check out UVA’s summary of the poll’s findings  here , or view the results directly  here .

Some of them are telling us that there are tens of millions of racists in America. I wonder how they know that?

HuffPo?  Really?  AND from 2017?  That's your source?  Remember the propaganda I mentioned to you in another article.  Yeah, this is part of it.

Oh, I see...So this Huffington Post opinion piece which uses moderate support for European Heritage as an indicator of "racism" is your "proof?"

And yet here you are.  Go with yourself and your propaganda.

Racists see everything through the prism of race.

You know progressive liberals have nothing to offer when they are reduced to such dishonest tactics.

What a waste of human flesh she is.

Pander on congresswoman, pander on to your racist constituents.

And ask for seconds.

Some don't recognize the Congresswoman as a threat, but her and her type of "thinking" certainly is.