Canada is about to have a U.S. ambassador again. It's only taken more than two years. But a logjam broke Tuesday evening in the U.S. Senate, as David Cohen's appointment was allowed to proceed.

The Philadelphia telecom exec will head to Ottawa after the Senate agreed unanimously to approve his appointment in a voice vote.

The development came amid flared tempers between Democrats and Republicans in the chamber over the alleged systematic blocking of President Joe Biden's diplomatic appointments.

On Tuesday evening, Democrats read out a list of names they hoped to confirm by unanimous consent, including ambassadors to Israel, NATO and Canada.

In the U.S., ambassadorial nominations require approval by the Senate, and Democrat Robert Menendez criticized his opponents for slow-walking scores of nominees; he mentioned Canada as one example.

"How does [blocking] the ambassador to Canada actually advance U.S. interests? It does not. It is seriously detrimental to our national security," he said.

Republican Sen. Josh Hawley then proceeded to block unanimous consent for a series of nominees, saying in some cases he was acting on his own behalf and in others on behalf of colleagues who had objections. 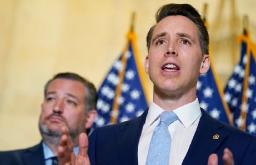 He said these nominations deserved a full debate and votes — like the NATO appointment, to get a better sense of how the Biden administration intends to press allies to meet military spending commitments.

Hawley criticized Democrats for going to the Glasgow climate summit instead of staying in the chamber to have full debates on nominations.

Top Senate Democrat Chuck Schumer ridiculed the idea that blocking so many nominations in any way served the American national interest.

"The consequence? Scores of empty desks in the State Department, in our embassies, in our Department of Treasury and other agencies," Schumer said.

"These nominees are not controversial. They're routinely confirmed by consent in this chamber, until a few people decided that they wanted to make a big show of this. For whatever reason. No one ever did this before."

After that exchange, Hawley kept blocking consent for nominees.

Then when Cohen's name came up something unusual happened: Nobody raised their voice to object, and the Senate recorded the new diplomat as being confirmed as heading to Ottawa.

The U.S. hasn't had an official ambassador at its Ottawa embassy since the departure of Kelly Craft in early 2019, when she was appointed by Donald Trump to represent the U.S. at the United Nations.

At his recent confirmation hearing, Cohen was asked about Canada's China strategy and he said the Biden administration looked forward to seeing one.

He arrives in Ottawa amid unresolved tensions over energy issues, with uncertainty over the Line 5 oil pipeline, and trade: Ottawa has registered  deep displeasure with a Buy American-style policy  on electric vehicles.

Josh is nothing more than just-say-no kabuki.

I think most members of the opposition party were concerned about the language barrier.

sometimes you're just too much

I think most members of the opposition party were concerned about the language barrier.

Goobers do have a problem speaking English, it's mostly Confederate that is their native language.

English is the language of commerce

French is the language of diplomacy

German is the language of philosophy

Spanish is the language of phonetics

Italian is the language of love

Chinese is the language of lost in translation

American is the language of I have an exceptionally big one ...

I love canada. those NA/french women are drop dead gorgeous and one night the dudes in the park across from the hotel got us higher than a moon rock. the vendor we were visiting had a corporate chef that served a hot 5 course lunch to the employees every day. they take eating seriously.

quebec city is the only place I ever spent any amount of time in canada, the old walled part of the city. it was awesome and the food was exceptional. unfortunately it was during the bush administration, so I had to spend an inordinate amount of time distancing myself politically from that total moron, as well as repeatedly explaining that all americans weren't crazed members of the NRA. our canadian hosts also seemed to have the impression that all americans hung out at strip clubs at night, which I thought was very amusing, especially in comparing the usa versus ca club rules. I loved arguing the exchange rate with the entertainers that were very persistent in insisting that canadian and american dollars were equal at the time. not. $1 us = $1.75 ca. meh, can't blame those girls for trying.

my fondest memories were getting off the river tour boat and stepping into a subway shop for lunch. the occupants were busily chatting away in english, until us americans opened their mouths, and instantly all the conversations turned french. at the airport the next morning when we were leaving, we arrived well ahead of departure and decided to have breakfast. all the intercom announcements were in french. apparently our sold out flight wanted to leave very early and the airline sent their representative to find us. they hustled us thru security as though they weren't too concerned about our luggage or persons. upon boarding the flight, with a lot of hushed french mumbling and stern looks, my partner in comedy and I spontaneously began mocking ourselves as late and entitled americans in very poor maurice chevalier accents. our small group were the only people speaking english for the duration of that flight.

sorry for the lengthy derail.

American is the language of I have an exceptionally big one ...

Huh, and here I thought it was "you should see the one that got away"...

Michif/Cree or in English Metis which of course is a French word.

I was surprised to find that not all in quebec were bilingual.

The Michif language is a combination of French, Cree, and/or Ojibwe. When I speak to French speakers you should see the look on their faces. They know there is French in there but are totally at a loss to figure it out.

When you ate in a restaurant in Quebec city, did the waiter call you "anglais-tete"?

"I think most members of the opposition party were concerned about the language barrier."

Obviously Cohen speaks English, but does he speak French fluently?

Funny, Biden has only been in charge 10 very long damn months. But the US hasn't had an ambassador to Canada for two years? Who was blocking what for the other 1 year and two months?

After all of the obstruction from the Democrats for the entire Trump administration to appointing anyone; that they now expect carte blanche when it comes to Biden's nominations. They had better buckle up after midterms; the last 2 years of Biden's time in office might be filled with political paybacks.

There was never any obstruction when it came to appointing an Ambassador to Canada. You also seem to forget that Trump bypassed the senate selection committees by naming 'acting whatevers'.