"I teach this lesson every year- kids (no matter what age) are riveted by the circumstances and understand the gravity of such an event."

community » Discussions » Category » News & Politics » Discussion » "I teach this lesson every year- kids (no matter what age) are riveted by the circumstances and understand the gravity of such an event."

Does anyone know where the love of God goes, when the waves turn the minutes to hours..........

@CKSwanSings
I teach this lesson every year- kids (no matter what age) are riveted by the circumstances and understand the gravity of such an event. And they love hearing Gordon Lightfoot’s haunting ballad.
Quote Tweet 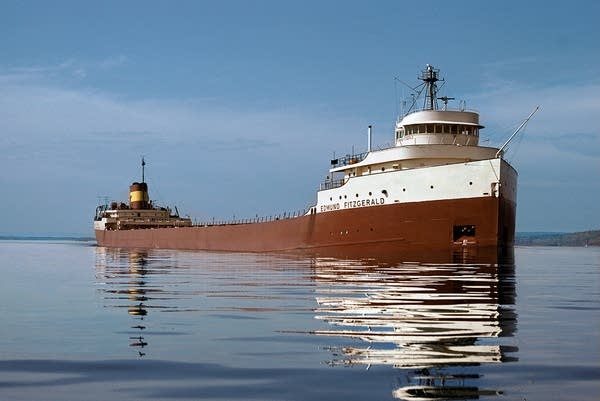 I remember the howling winds in the Twin Cities whistling through the trees. When I heard TV news legend Dave Moore on WCCO-TV tell us that the Edmund Fitzgerald had gone down in Lake Superior, I felt the coldest chill of my life go down the back of my neck. Our family had recently circled Lake Superior on a vacation, and I remember thinking about the horror of being in that storm on that lake on a dark November night.

That’s what   I wrote in Updraft in 2009 about the storm   that took the Edmund Fitzgerald to the bottom of Lake Superior.

Path of the Edmund Fitzgerald.
NOAA

Here’s more from my 2009 piece on the advances in weather forecasting that likely would have saved the Fitz today.

Looking back, there were several weather scenarios that could have saved the Fitz. The Fitz could have stayed in port another 48 hours. They could have taken a shorter, more southerly route and possibly made Whitefish Bay before the height of the storm. If weather forecasters in 1975 had better data, they could have forecast the intense and rapid deepening of the storm system that would produce hurricane force winds and gigantic waves that sunk the Fitz.
Vastly improved data from weather  radar  and  satellites  and  better numerical weather  models have improved marine weather forecasts dramatically since 1975. In 1975 numerical models had just 3 "grid points" (data points) over Lake Superior. By 2000, that number had increased to 420. That's 140 times the number available in 1975.

Much has been written about that fateful storm.   One of the best resources   I have found comes from the University of Wisconsin.

Here are some critical excerpts from that piece.

On November 8 a storm was brewing in the plains and proceeded northward towards the Great Lakes. It appeared to be a "typical November storm".

On November 9 at 7 p.m. the National Weather Service (NWS) issued a gale warning for Lake Superior. In a gale, the wind speeds range from 34-40 knots. The NWS predicted east to northeasterly winds during the night, shifting to NW to N by the afternoon of November 10. At approximately 10:40 p.m. the NWS revised its forecast for eastern Lake Superior to easterly winds becoming southeasterly the morning of the 10th. At about 2:00 am November 10 the NWS upgraded the gale warning to a storm warning (winds 48-55 knots) with a prediction of "northeast winds 35 to 50 knots becoming northwesterly 28 to 38 knots on Monday, waves 8 to 15 feet". Around 2 a.m. the Captains of the  Anderson  and  Fitzgerald  discussed the threatening weather and decided to change their route. This safer route would take them northward, toward the coast of Canada. The northern route would protect them from the waves that the storm generated.


At 7 am. the storm passed over Marquette MI and started across Lake Superior.

On the afternoon of November 10 a wind shift was evident. At 2:45 p.m. the winds had backed to NW and were 42 knots. Steady winds at 43 knots and waves of up to 12 and 16 feet were reported by the  Anderson . At around this time the  Fitzgerald  contacted the  Anderson  and reported "a fence rail down, two vents lost or damaged and a list". A list is when a ship leans to one side. Also around this time, the storm's fury had closed the Sault Ste. Marie locks.

A shift of winds to the NW is very important, as this increased the fetch, allowing large waves to build. The  Fitzgerald  and  Anderson  were no longer protected by land.

Late on the afternoon of the 10th, the captain of the  Fitzgerald  made radio contact with another ship, the  Avafor , and reported that they "had a bad list, had lost both radars, and was taking heavy seas over the deck in one of the worst seas he had ever been in." Captain McSorely was a seasoned sailor of the Great Lakes with 44 years of experience.

This phrase of the song, while romantic, makes it sound as if the crew knew they were doomed. In reality the sinking of the  Fitzgerald  was very rapid and it is likely they did not know the seriousness of their condition. Indeed, after the wreck a severely damaged life boat was found, and only part of the second. The conditions of these lifeboats suggests that no attempts were made to leave the ship. No distress signals were ever issued.

they may have broke deep and took water...."

Here’s more on the mechanics that likely caused the Fitz to plunge rapidly to the bottom of Lake Superior.

What caused the ship to sink? There are a couple of theories cited in the "Marine Casualty Report" by the US. Coast Guard Marine Board of Investigation Report. Since there were no survivors nor witnesses, their report is based on testimonies and an underwater survey of the wreck. This report suggests that the  Fitzgerald  was taking on water due to earlier damage from the storm and that around 7:15 p.m. it plunged headfirst into a large wave and sank abruptly.


Factors contributing to the sinking:

When a ship is filled with cargo, there is a level at which the ship rests in the water. This level is referred to as the load line. The height load line is set as a function of season and determines the weight of the cargo the ship can transport. Between the time of her launch and its sinking, the  SS Edmund Fitzgerald  load line was raised 3 feet 3 1/4 inches, making her sit lower in the water. This increased the frequency and quantity of water that could flood the deck during a rough storm.

The ore was loaded through hatchways located top side. On October 31 routine damage was noted during an inspection and were scheduled for repair after the 1975 shipping season. The hatch covers were not sealed properly and were therefore not water tight, thus allowing water to enter the cargo areas. Once water entered it could migrate throughout the hold. There was no way to determine if flooding was occurring in the cargo bay until the ore was saturated, much like a sponge. Throughout the storm the ship was probably taking on water in the cargo hold though the hatches. Increased water loading, and the lower load line, made the ship sit lower in the water, allowing more water to board the ship. Eventually the "bow pitched down and dove into a wall of water and the vessel was unable to recover. Within a matter of seconds, the cargo rushed forward, the bow plowed into the bottom of the lake, and the midship's structure disintegrated, allowing the submerged stern section, now emptied of cargo, to roll over and override the other structure, finally coming to rest upside-down atop the disintegrated middle portion of the ship" (Marine Accident Report SS Edmund Fitzgerald Sinking in Lake Superior). This sequence of events would lead to a rapid sinking, with no time to make a distress call or attempt life-saving operations. The conditions of the recovered lifeboats support this in that they appear to have been torn from their storage racks.

"Does anyone know where the love of God goes

when the waves turn the minutes to hours? "

Although the song depicts a haunting true life maritime tragedy, it is still one of my all time favorite Gordon Lightfoot songs.

And love the ballad. Always have

I remember that storm well.   Several of the lost souls were from our Great Lakes Maritime Academy.

The Arthur M. Anderson was 10 miles behind the Edmund Fitzgerald on that fateful night. The Anderson made safe harbor at White Fish Bay but left in the height of the storm to search for the Fitzgerald.

The Fateful Journey. The actual conversation between Captain Cooper of the Anderson, the CG and what Captain saw of the Fitzgerald on his radar.

Today the weather is mild, but a storm is coming in from North Dakota where it will sit over Lake Superior tomorrow. Gale warnings are up for Thursday and Friday on the big lake and snow from a 1" in Duluth to as much as 6" on the Arrowhead of MN.