Migrants huddled around campfires and chopped firewood to keep warm in freezing temperatures on the Belarus-Poland border Wednesday amid a worsening crisis.

Poland and other European Union member states accuse Belarus of using migrants as pawns to create a new wave of mass migration into the bloc. At least 8 have died, according to the Associated Press.

Autocrat Lukashenko, whose government is propped up by the Kremlin, has denied engineering the crisis and instead blames the West.

In response Poland's right-wing government has strengthened the force of soldiers stationed at the border to 15,000 from 12,000.

The country's defense ministry shared a video on Twitter purporting to show the Belarusian side "intimidating" migrants by firing shots as people near the barbed-wire fence can be heard screaming. It was not clear how the ministry obtained the video, when it was filmed or whether anyone was hurt.

NBC News could not independently verify the video, and has reached out to the Belarusian defense ministry for comment.

Images also started to emerge showing injuries among migrants. A photo shared by Reuters shows Youssef Atallah, a migrant from Syria, displaying apparent facial injuries after he said he was beaten by Belarusian border guards.

Youssef Atallah, a migrant from Syria, pictured in the center for migrants in Bialystok, Poland.Marko Djurica / Reuters

Meanwhile, the Belarusian State Border Committee published videos and photos allegedly showing Kurdish migrants they say were beaten and injured by Polish security forces. The Polish defense ministry told NBC News in an email these were a "provocation" and part of a "disinformation campaign" to discredit Polish forces. NBC News has not verified the videos or photos.

Maas called the images emerging from the Belarusian border "appalling."

"We will not abandon anyone who is in need," he said.

Many migrants have flown to Minsk on tourist visas before making their way to the border. Leonid Shcheglov / TASS via Getty Images

The U.N. refugee agency UNHCR called for an end to the "instrumentalization of migrants and refugees" to achieve political goals Tuesday, describing the situation as "deplorable."

U.N. human rights chief Michelle Bachelet said the rights of migrants should be of paramount concern.

"These hundreds of men, women and children must not be forced to spend another night in freezing weather without adequate shelter, food, water and medical care," she said in a statement on Wednesday.

These migrants are not from Belarus or from Poland.  Neither Belarus or Poland created this situation.  The United Nations pointing fingers of blame at Poland and Belarus is only a political attempt to deflect attention away from the UN failures.

Your depth of vision is wanting ...

Your depth of vision is wanting ...

Are you attempting to make the claim that Russia forced these migrants into Belarus?  No, the migrants themselves intentionally, deliberately, and maliciously created the problem.

The following is from Polygraph.info, a fact-checking website produced by  Voice of America  (VOA)​:

Amid rising tensions from a refugee standoff at the Polish-Belarusian border, Russian Foreign Minister Sergey Lavrov accused European countries of   having “double standards”   on the treatment of refugees.

“Yesterday, in some political science discussions, they asked: Why, when refugees came from Turkey to the European Union, the EU allocated funding so they stay on the territory of the Republic of Turkey?” Lavrov asked at a news conference.

“Why is it also impossible to help Belarusians who have certain needs so that refugees, whom Poland and Lithuania do not want to let on their territory, live in normal conditions?”

Lavrov said Western countries, particularly NATO members, were directly responsible for the conditions that lead these migrants to flee to Europe.

“Respecting international humanitarian law, one must understand that this also implies respect for people who have become refugees through the fault of the West, first of all, which unleashed aggressive wars in the Middle East and North Africa.”

Belarus does not border any Middle Eastern country, nor have the migrants who have arrived in Belarus come overland. Turkey, on the other hand, borders Syria and Iraq and is directly affected by neighboring crises.

Refugees can reach the Turkey by land rather than flying to Ankara or Istanbul. Not so for Belarus. In recent months, Belarusian “tourist” agencies have been advertising flights to Minsk from places like Baghdad, and granting tourist visas. An   investigation by Reuters   found that smugglers in Iraq have been charging would-be migrants between $10,000 and $12,000 to get visas and air tickets to Minsk.

Once in Minsk, migrants have been driven to the border. This flow has increased considerably, and videos show migrants who are effectively homeless waiting in Minsk. New video has emerged apparently showing Belarusian border guards forcibly pushing migrants across a thin fence on the border with Poland.

Russia’s ally in Syria, the Bashar al-Assad regime, has also helped increase the flow of migrants, using the state airline Cham Wings to fly people from Damascus to Minsk.

Earlier this year, Lukashenko all but   publicly admitted   he would open the border between Belarus and his EU neighbors. But Belarus is not on the normal refugee route to Germany, where most of the migrants wish to seek asylum.

Lavrov’s claim that the West bears sole responsibility for the dire conditions in these Middle Eastern and North African countries is also misleading.

Some major NATO members – Germany and France – opposed the U.S. invasion of Iraq in 2003. What’s more, since then many countries, including Russia and its ally Iran, have played key roles in regional conflicts.

The most egregious problem has been Syria, a major source of refugees since 2015. The war in Syria began in 2011 with protests against the Assad regime, which responded with a military crackdown. Since the uprising turned into a full-fledged civil war, the Assad regime has been backed by its   Iranian   and Russian allies.

Since 2015, the Russian air force has been actively involved in bombing campaigns that left thousands homeless and   with little choice but to flee . Russia also backed the military of the Libyan warlord   Khalifa Haftar , which prolonged that country’s civil war. Russia’s ally Iran has also   supported sectarian militias in Iraq   for years.

You seem to have bit hard on Lavrov's bait.

There wouldn't be a Belarus-Poland migrant standoff if the migrants had not intentionally, deliberately, and maliciously created the situation.

If Poland and Belarus are the victims of anything, It is their own authoritarian governments and Russia's goal of dismantling both the EU and NATO.

If Poland and Belarus are the victims of anything, It is their own authoritarian governments and Russia's goal of dismantling both the EU and NATO. 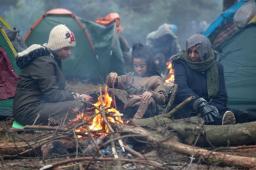 Belarus bussed them there.

Belarus bussed them there.

What's the difference in attitude between these migrants and the very rich?  Both expect to go where they please, do whatever they want to do, and society will protect them and give them what they want.

... and your whining is getting you what other than "intentionally, deliberately, and maliciously" posting Pavlovian propaganda 'insights'?

... and your whining is getting you what other than "intentionally, deliberately, and maliciously" posting Pavlovian propaganda 'insights'?

... and you are attempting to convince everyone to chase political squirrels rather than recognize the cause of the problem.

The migrants, themselves, created the standoff.  The migrants are the cause.

The migrants, themselves, created the standoff.  The migrants are the cause.

How is what the migrants in Belarus trying to do any different than what migrants on our own southern border are trying to do?  Aren't the migrants jumping our borders intruding into our society, disrupting our society, and trying to change our society to get what they want?  The Nazis jumped the Polish border and what followed is the history being invoked to garner sympathy for border jumpers?

You invoked the Nazis.  How obtuse is that?  History is not on the side of the argument you are attempting to make.

You invoked the Nazis.  How obtuse is that?

You tell me, and after that do digress on your disdain for migrants. The same conditions led to 3.2million migrants fleeing Europe including my mother with my eldest new born brother at the end of WWII.

You tell me, and after that do digress on your disdain for migrants. The same conditions led to 3.2million migrants fleeing Europe including my mother with my eldest new born brother at the end of WWII.

There is a difference between immigrants seeking permission to enter a country and migrants jumping the border.

Auschwitz–Birkenau was located near Krakow, Poland and not in Germany.

Really? I visited it twice and all the time I thought I was in Germany ... /S

“Today, Poland approved – not for the first time – an antisemitic and unethical law. Tonight, I instructed the chargé d'affaires of the Israeli Embassy in Warsaw to return to Israel immediately for indefinite consultations.
“The new Ambassador to Poland, who was due to leave for Warsaw soon, will not be departing for Poland at this stage.
“The Ministry of Foreign Affairs will recommend today that the Polish Ambassador to Israel remain on holiday in his country. This time should be used to explain to the people of Poland the meaning of the Holocaust to the citizens of Israel, and the extent to which we will refuse to tolerate any contempt for the memory of Holocaust and its victims. It will not end here.
“We are holding discussions with the Americans to coordinate our future response.
“Tonight, Poland has become an anti-democratic and illiberal country that does not honor the greatest tragedy in human history. We must never remain silent. Israel and the Jewish people will certainly not remain silent.”

And here is the Poilish side of the story:

The Communists seized and nationalized property in Poland.  So, claims for restitution aren't limited to Jews and the Holocaust.  And Poland's new restitution law affects everyone's claims, not just claims made by Jews.

The claims of antisemitism are intended to push political buttons just like claiming migrant invaders are the same as Polish Jews.  The facts don't support either political argument.

The USA is not the only place with this problem