The Biggest Bully Is a Half Decade Late / Chris Christie is finally ready to stand up to Trump. Sort of.

community » Discussions » Category » News & Politics » Discussion » The Biggest Bully Is a Half Decade Late / Chris Christie is finally ready to stand up to Trump. Sort of. 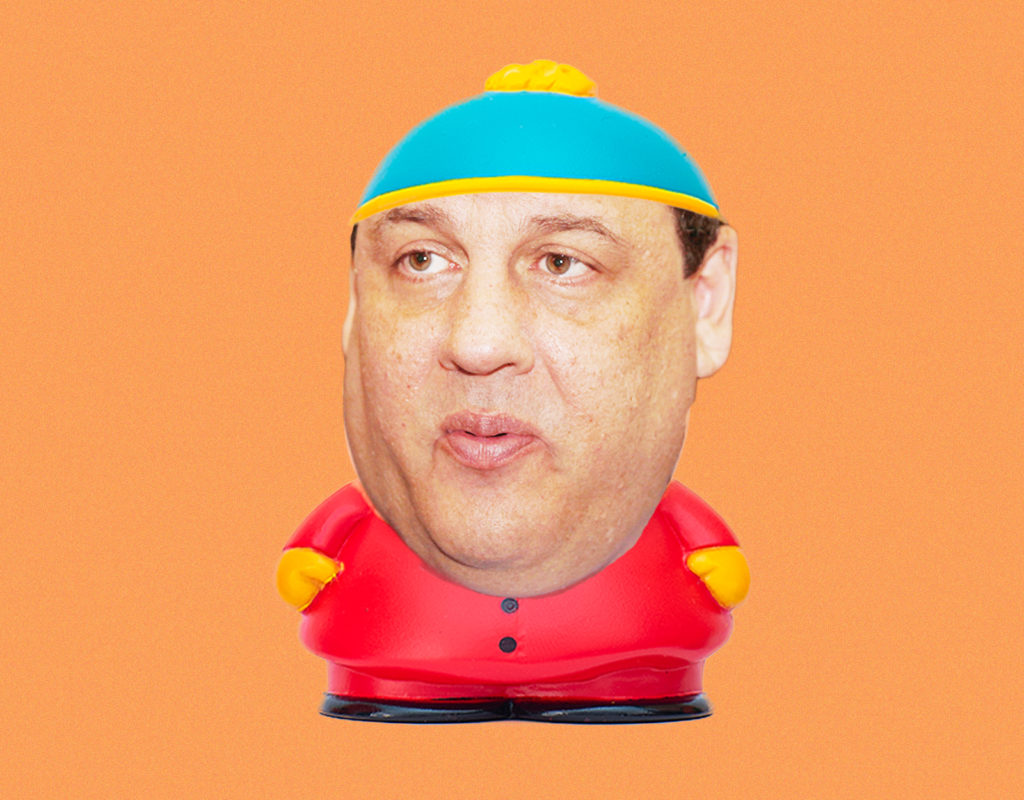 In a desperate attempt to resuscitate his long-dead political career, Christopher “Cartman” Christie has undertaken a quasi-anti-Trump media tour that seems to be premised on the entire country having been afflicted with degenerative frontotemporal dementia.

The Axios story   that greeted me when I opened up the Twitter machine this morning begins thusly:

“I’ve never walked away from an argument, no matter who stood on the other side,” Christie told me during a wide-ranging interview in New Jersey.

Is that so, Eric?

Like every other pathetic, podgy, scared, insecure bully who has ever disgraced a schoolyard, Chris Christie talks a big game. But when he was called upon to meet the biggest threat of his life—a doughy, soft-handed trust-fund baby with authoritarian aspirations—Christie didn’t just walk away from an argument. He waddled as fast as he could go in his urine-soaked pull-ups.

The date was February 6, 2016. The occasion was the eighth Republican primary debate in Goffstown, New Hampshire, a few days before the primary. Over the course of the first seven debates Mr. Tough Guy had not laid a single cuticle on the frontrunner, Donald Trump. While my boss at the time—Jeb Bush—was getting slapped around like a ragdoll by Trump’s insult comedy, Christie stood in the spot reserved for the lowest-polling candidates on the far corner of the stage, twiddling his thumbs, doing everything he could to avoid drawing Trump’s ire.

In case you’ve forgotten, New Hampshire was Christie’s last stand. If his campaign was going to go forward, he needed a strong showing in the Granite State. And so one would assume that a big, tough fighter like Christie would’ve taken Ric Flair’s sage   advice —“to be the man, you’ve got to beat the man”—and gone right at the frontrunner rather than leave the fighting to be done by a bookish policy-wonk.

Nope. Instead, Christie surveyed the stage and decided to try and butch himself up by taking on the runt of the pack: He ignored Trump and whaled on Lil’ Marco, to the delight of many. To the delight, in fact, of Trump. Here’s Christie in his book   recounting   what happened at the debate when they broke for a commercial:

I felt a tap on my shoulder. It was Donald Trump. Donald put his arm around me and said, “God, you destroyed him. . . . You’re the only one who could have done that. Just remember: I haven’t said anything bad about you. Don’t go after me.”

Christie succeeded in blunting Marco’s momentum, but did nothing to boost himself. Three days later Trump went on to win New Hampshire in a rout, Marco fell to fifth, and Christie bottomed out in sixth. After which he walked away from the race without ever having even thrown an unkind glance in Trump’s general direction.

If Christie’s story of his cowardice and Trump suck-upitudde ended that night then maybe I wouldn’t have had to rage-write this column. But as we all know it did not end there.

Christie could have retired back to the Garden State and ate greasy diner food in peace. He could have joined forces with a less dangerous GOP foe and tried to help stop Trump. He could’ve joined the anti-Trump Super PAC I signed up for two days after Jeb dropped out and been our chairman. Hell he could’ve done a full heel turn and endorsed Hillary because, let’s be honest, he was always a RINO at heart.

He took none of those paths.

Desperate for attention and a campaign where he could have “influence,” Christie surveyed the field and decided that once he had been defeated the only choice was to present to his dominant and endorse Trump.

Endorsements normally mean very little, but this one was significant, right up there with Ted Kennedy   blessing   Obama, because it provided the permission structure that institutionally Republican voters needed to support an unorthodox candidate.

Christie didn’t deliver a specific cohort of voters to Trump—he had just got schlonged in a primary in which he received 0 delegates. But his support gave a stamp of credibility to a thoroughly uncredible candidate. He was the first prominent “mainstream” or “establishment” Republican to take the plunge. Newt Gingrich laid this out at the time,   tweeting   that Christie “introducing and standing with Trump gave the event a sense of seriousness.”

So right at the moment when the Republican party needed to unite against Trump, Christie gassed the fellow up. And then he spent months solidifying Trump as the primary’s alpha male by allowing him to thoroughly debase his new pup in front of the entire country. As you might recall:

And over the ensuing months Christie sat silently by as his new daddy talked about banning Muslims, made racist accusations at the expense of judges, and insulted gold star parents. Christie maintained his endorsement even after Trump was caught on tape admitting to serial sexual assault. No one was a more loyal surrogate for a man that everyone knew was plainly unfit and dangerous.

So now, six years later, Christie wants to worm his way back into the spotlight as the guy who is willing to take the fight to Trump.

The gambit seems to have worked for the ratings-starved suckers at CNN.

But it shouldn’t fool you.

Chris Christie can make fun of Trump all he wants and I welcome that. It is nice to hear any Republican in good standing actually admit that the orange fella lost. The more converts to reality, the merrier.

But we don’t have to pair that with advancing the phony BS that Christie is the one man willing to say hard truths. Admitting Trump lost isn’t a hard truth, it’s basic reality. And Christie isn’t a tough guy. He’s the most craven of bullies.

So if one of the men chiefly responsible for Trump wants a seat on our TDS-bandwagon, he’s welcome. There’s a narrow little jumpseat in the back that he can squeeze into.

But don’t board the bus while making a speech about how you never shied away from a fight.

We all know the truth.

Christie is six years late and one insurrection short and   I will not be respecting his authorit-aye .

As you might recall: And over the ensuing months Christie sat silently by as his new daddy talked about banning Muslims, made racist accusations at the expense of judges, and insulted gold star parents. Christie maintained his endorsement even after Trump was caught on tape admitting to serial sexual assault. No one was a more loyal surrogate for a man that everyone knew was plainly unfit and dangerous.

what a joke. By stating the reality of what actually happened a a United States Presidential Election, is somehow now an "accomplishment" for the Repubs, ??? #WTF

Although this hit piece is way over the top in acerbic exaggeration (e.g. "He waddled as fast as he could go in his urine-soaked pull-ups.") I agree with the underlying political assessment of Christie.    Christie's subservience to Trump (from political competitor to sycophant) was shocking (to me) and revealed him to lack the qualities of leadership.  He should not consider himself a candidate for anything and instead work as a political advisor, lobbyist, etc.

Wonkette is a site that uses sarcasm and humor in its news coverage.

Well he turned off the trumpers and (conjunction junction..) any sane person would not vote for him.

He doesn't have enough of a following to be a player on the national stage.

A Trump lapdog for quite some time.

Considering the ones that weren't were ostracized, stripped from committees, etc.

Hell, it is still going on today. Look at the way they treat Cheney.

Christie is what happens when the voters free Willy.