Scott Pelley reports on what one meteorologist is calling, "The Beast," the record-breaking tornado that left a more than 165-mile path of devastation last week in Kentucky.

The devastation is so severe across such an expanse that we still don't know the toll of the Southern and Midwestern tornadoes. Starting the night of December 10, at least 59 twisters carved through ten states —a swarm you wouldn't expect two weeks before winter. We spent the last several days in Kentucky, where it was still strangely warm and questions of climate change are being asked. The answers aren't clear, but we do know what we saw is rare. The storm threw down one twister that cut a path of destruction of more than 165 miles. One meteorologist we talked with called that tornado, "the beast."

All that rises from a levelled landscape are bonfires of memories. On the Rickard farm, in western Kentucky, they burn what they can't save from the two-story brick home that seemed unshakable on that foundation down there on the right and the garage by its side. 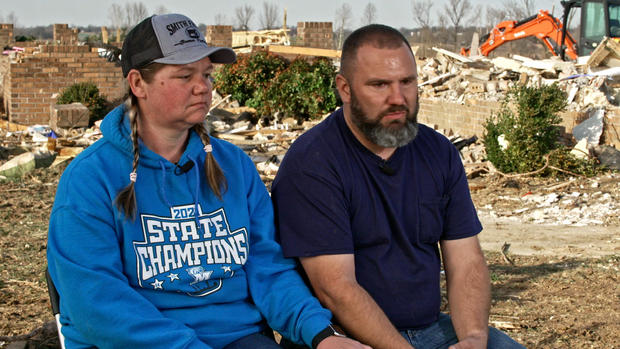 Shawn Rickard: It sounded like ten trains on a track, coming towards you full speed.

Scott Pelley: Your neighbor shot a video of the tornado—

Their neighbor turned his phone toward the Rickard cattle farm and framed lightning catching history.

Shawn Rickard: Been viewed many times on Facebook, I believe. that video is basically as it's hitting our farm.

That's "the beast." A mile wide. Spinning, counterclockwise, around 190 miles an hour. Shawn and Mindy Rickard bolted for a church.

Scott Pelley: Why did you go to the church? Why not stay in your brick home?

Shawn Rickard: I guess the good lord told us to leave and we left. He was taking care of us. I can't tell you other than that. I don't know.

Seems likely, had they stayed, they would have been among at least 90 dead. No one remains missing.

Pat Spoden: It was a beast of a storm. It was big, it was persistent, and it wasn't gonna stop. Nothing's going to stop this thing.

Hours before the storm, Pat Spoden was already worried. The 73-degree day his neighbors enjoyed made his stomach churn.

Pat Spoden: And, I've been doin' this for 34 years. You have that gut feeling like, "This is not good. It's not gonna be a good day." 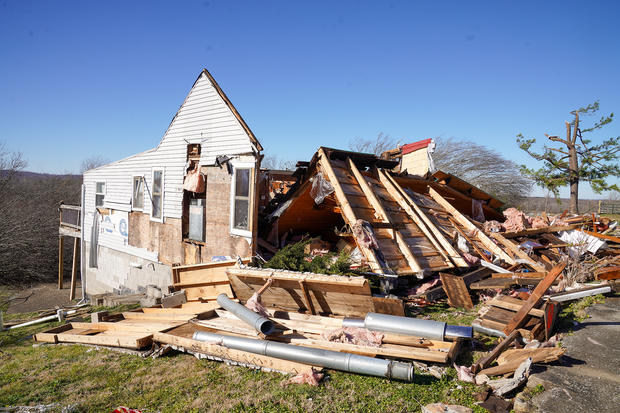 The aftermath of the tornado Eric Kerchner, 60 Minutes/CBS News

It was too warm for December. Spoden was working that night at the weather service in Paducah, Kentucky where he dreaded the images of the storm. Where red meets green there is rotation. But what caught his eye was an area of high density in the sky. It was debris, trees, and homes and lives, spiraling to astounding heights.

Scott Pelley: The debris was reaching 30,000 feet-about where airliners fly?

On the screen, Spoden saw the twister close in. He knew the tiny word, "Mayfield" meant 10,000 people. He typed the first tornado emergency alert in his career.

Pat Spoden: And I remember saying, "I can't spell Mayfield!" because I'm nervous. I know what's going on and what is at stake. 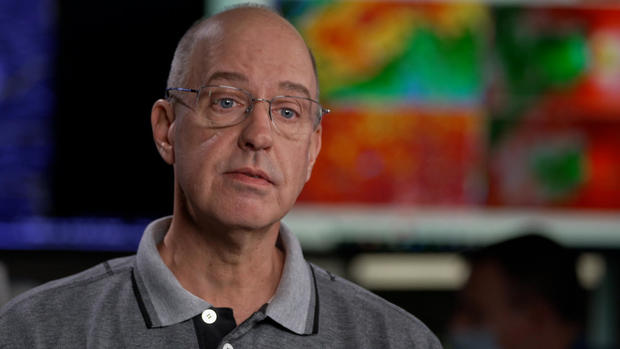 Tornado watches and warnings had been buzzing phones all day, but after 9:26 p.m., the weather service sent its final warning-- startling words in digital deadpan.

NWS WARNING : You are in a life-threatening situation. Mobile homes will be destroyed. Considerable damage to homes, businesses, and vehicles is likely and complete destruction is possible.

It was nearly complete destruction in half of Mayfield, Kentucky. This is where the Mayfield Consumer Products candle factory was destroyed. The company says eight died, but more than 100 survived. They had a 22-minute warning -- the time to take cover.

Just 90 miles north of Mayfield, and nearly 100 years ago, the record for the longest tornado path ever was set in the spring of 1925. Before radar and warnings, nearly 700 were killed along a stretch of 219 miles. Back then, government forecasters were not allowed to use the word "tornado." The term was considered too frightening. The phenomenon, too poorly understood.

Karen Kosiba: You need to look at other debris in the area, nearby debris, and see if damage is uniform…

Karen Kosiba is a leading scientist who has studied tornadoes for 16 years. Her work at the University of Illinois uses sophisticated radar trucks to scan tornadoes up close and in unprecedented detail. 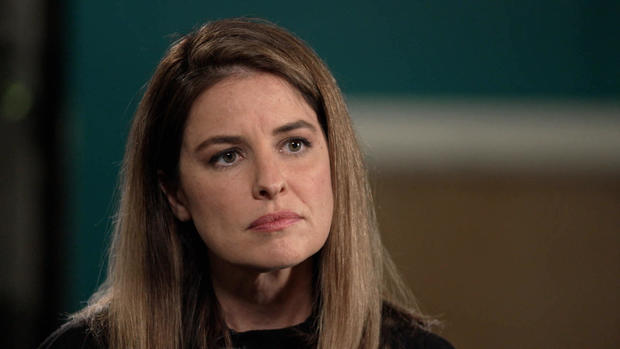 Scott Pelley: What are the big questions you would like to answer about tornadoes?

Scott Pelley: The United States has by far more tornadoes than any place else on Earth, and I wonder by that is.

Karen Kosiba: Because it has either, I'll say, lucky or unlucky geography. We have the Gulf of Mexico, which is an ample source of moisture that helps bring in warm, moist air at low levels. We have the Rocky Mountains, which adds a nice cool layer up at sort of mid-levels. And what that does is that gives you an unstable atmosphere as these systems move through.

Scott Pelley: This happened on a 73 degree-day in December. And I wonder what effect does climate change have on this?

Karen Kosiba: Certainly, we know that our climate is warming. But how that actually manifests itself into tornado outbreaks or tornado intensity or tornado location is difficult to determine. There's a lotta research going on. There are indications that potentially, the tornado threat is moving farther east than it normally is, or that it might be occurring later in the year during these cool seasons, so these November, December, January, February, that that might be more prolific for tornadoes than previously. 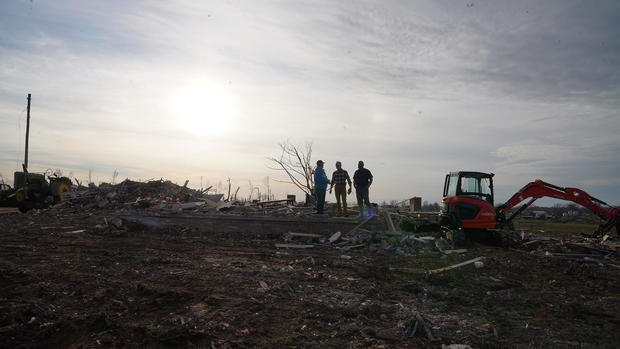 But the effect of climate change is unclear. Tornado formation is fleeting, complex and not completely understood. 2020, for example, was one of the three hottest years on record and it was an off year for tornadoes.

Scott Pelley: There's a lot we don't know about climate change and the weather?

Karen Kosiba: But there's a lot of research being done trying to figure out what's happening with climate change and the weather. And really, I mean, there's no indication that any of these things are gonna go away. So, I think it's really what needs to be the focus is being prepared for these types of events.

Preparation, adequate warning, is no longer the problem; the weather service gets it right nearly 90% of the time. On a hillside of mostly mobile homes, residents knew it was coming but there was no place to hide. James Pendley threw himself on top of his son.

James Pendley: I knew things were gonna start flying, so I decided that my son needed to be shielded. Because he's only 20. And I'm in my 50s, so I figure two choices here, him or me and I figured he'd be one that needs to make it through this.

James Pendley: I've lived it. I've had 35 good years with her, and I figured if anybody needed to make it, it was gonna be him.

Timmy Vannoy came to check the hill for his aunt and uncle. He found most every home destroyed amid shouts of missing children. 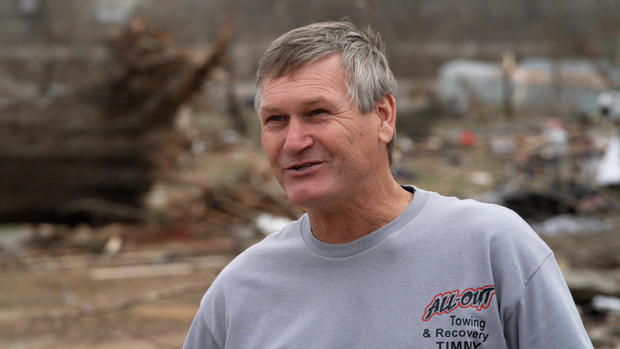 Timmy Vannoy: Of course, it's pitch black and a few of the deputies and me, we had flashlights, but that didn't help much.

Bodycam footage: 329 can you get down here? We need help. We've got somebody under this debris.

He searched with two sheriff's deputies who were wearing cameras.

Timmy Vannoy: And so we moved all the debris off the shower, and we lifted the shower up, and there was the little 15-month-old, was laying there crying, little boy.

Deputies Trent Arnold and Troy Blue delivered the boy into the world again.

Timmy Vannoy: And over to the side of it was-- they had a little three-month-old that -- he was up and under all the debris, laying on his-- on his belly.

Bodycam footage: Both of them are okay. Oh, praise God!

Those children — everyone on the hill survived.

Bodycam footage: Just get in the car with him. Here's the little one. Thank you, Jesus. 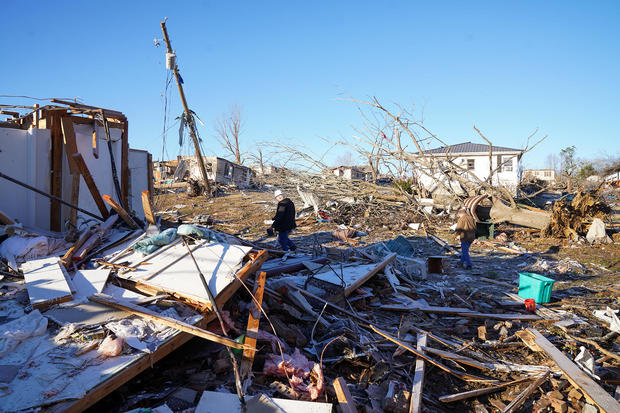 Christine Wielgos: You see where it just broke off the rebar over here… It snapped it like a toothpick…

This week, the path, power and duration of the beast are being measured by teams including the weather service's Pat Spoden, Christine Wielgos and Steve Eddy. It's estimated 15,000 buildings were shredded across the region at a cost of $3.5 billion.

Pat Spoden: The interesting point of this thing being lofted up the hill and what kind of energy it took to lift it…

What impressed them were the scattered rail cars tossed and capsized. Tank cars were flared to burn off the remains of their combustible cargo.

Steve Eddy: Normally that'd be a great place to be. I mean, you'd have got crushed here.

Steve Eddy was amazed that this University of Kentucky building couldn't stand up to the fight.

Steve Eddy: That's where I would've told people to go, to go in and seek shelter.

Scott Pelley: Because it was so well built.

Christine Wielgos: It was only 18 months old.

Eddy and Christine Wielgos told us that even with their radar and super computers, the most accurate way to measure the power of a tornado is by appraising what is left behind.

Steve Eddy: We're talking about 1% to 2% of the tornadoes that occur, 98% of 'em are on the ground for about a minute and are about 100 feet wide. Very short, brief, is a normal tornado. Wind speeds 70, 80 miles an hour maximum usually.

Scott Pelley: How was this different?

Steve Eddy: Yeah, historic. That-- I like that word--

Her brick home destroyed, Mindy Rickard found jelly she canned in a glass ball jar—another memory from what has already been a long life with her husband, Shawn. They met when they were 4 years old.

Scott Pelley: What have you found that has meant something to you?

Mindy Rickard: So, as a family we had three children, Chloe, Chase, and Caleb. And in 2011, our youngest, Caleb, passed away in a tragic swimming pool accident.

Mindy Rickard: There was a blanket that all three of my kids used. We used it with all three of 'em. But Caleb was the one who just really seemed to latch on to that blanket. And he packed it with him everywhere he went.

Caleb's blanket was found by a friend, about 150 yards away—somehow still folded. The Rickards plan to rebuild on the old foundation. The bonfire will not erase the history of the family's three generations on this hill—roots that not even a storm called the beast could sever.

Proff reading is so old fashioned.