By:   By Katherine Dillinger, CNN 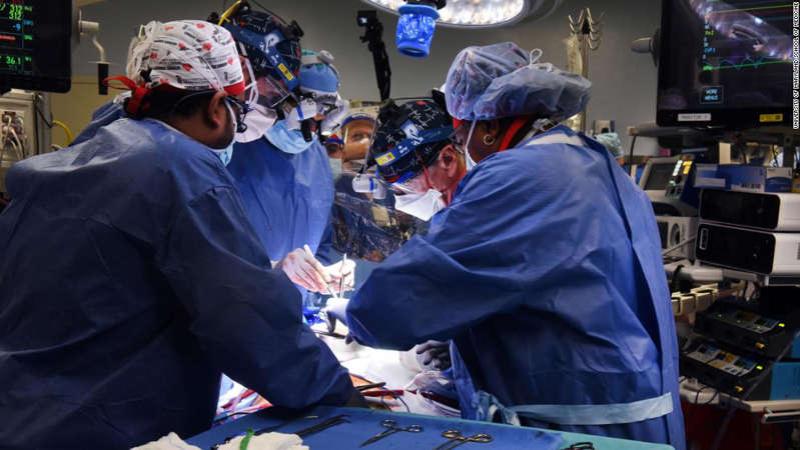 © University of Maryland School of Medicine

David Bennett had terminal heart disease, and the pig heart was "the only currently available option," according to the release. Bennett was deemed ineligible for a conventional heart transplant or an artificial heart pump after reviews of his medical records.

"It was either die or do this transplant. I want to live. I know it's a shot in the dark, but it's my last choice," Bennett said before the surgery, according to the release.

The US Food and Drug Administration granted emergency authorization for the surgery on December 31.

Three genes that are responsible for rejection of  pig organs  by human immune systems were removed from the donor pig, and one gene was taken out to prevent excessive pig heart tissue growth. Six human genes responsible for immune acceptance were inserted.

Bennett's doctors will need to monitor him for days to weeks to see whether the transplant works to provide lifesaving benefits. He'll be monitored for immune system problems or other complications.

"There are simply not enough donor human hearts available to meet the long list of potential recipients," surgeon Dr. Bartley P. Griffith said in a statement. "We are proceeding cautiously, but we are also optimistic that this first-in-the-world surgery will provide an important new option for patients in the future."

Revivicor, a regenerative medicine company based in Blacksburg, Virginia, provided the heart, according to the news release.

A total of 106,657 people are on the national transplant waiting list, and 17 people die each day waiting for an organ,  according to organdonor.gov.

Art Caplan, a professor of bioethics at New York University, said he was a little apprehensive when he heard the news of Bennett's transplant.

"I hope they've got the data to back up trying this now, based on their animal studies," he said.

The United States has a "terrible" shortage of organs for transplants, he said. He believes engineering animal parts  is  a solution.

"The question is, can we get there with minimal harm to the first volunteers?" he asked.

Pig heart valves have been transplanted into humans for many years.

In October, surgeons successfully tested the transplant of a genetically modified pig kidney into a woman in New York who was brain-dead.

Caplan said it is too early to call the heart transplant a success. That label will come if Bennett has a good quality of life for months, he said. But it's still possible that he could die.

Whatever the outcome, it's important for researchers to learn something that can be applied to future transplants, he added.

He said there also should be an independent review of the data that went into the decision to do this first transplant.

The other ethics issue is around the consent, he said. It should come from others besides the patient, who is very likely to agree to the surgery if he is facing death.

"Consent for the imminently dying is important to get ... but it's not enough," he said, suggesting a research ethics committee weigh in. "You want to have somebody else say, 'Yes, we agree' this isn't a crazy, too risky thing to try.' "

More than 40,000 transplants -- a record -- were done in 2021, according to the Organ Procurement and Transplantation Network.

Professor Principal
1.1  Trout Giggles  replied to  Buzz of the Orient @1    2 weeks ago

Which one? Animal Farm?

I had read in a different article about this event that a pig's organs are quite similar to a human's.

Hope he does well and this can help others

Ditto.  If it works out so many lives that otherwise would be lost, can be saved.  As the article said, 17 people die each day while waiting for a donor.  I wonder about how the Jewish and Muslim religions would deal with it being a pig's organs.  I believe that in Judaism, saving a life takes precedence over everything else.

If they don't like pigs that is their loss.

I think it has more to do with beliefs than whether or not they like it.

This is a wonderful break thru! I work with a woman who lost her 20 something son while he was on a transplant list.