By:   The Canadian Press Staff 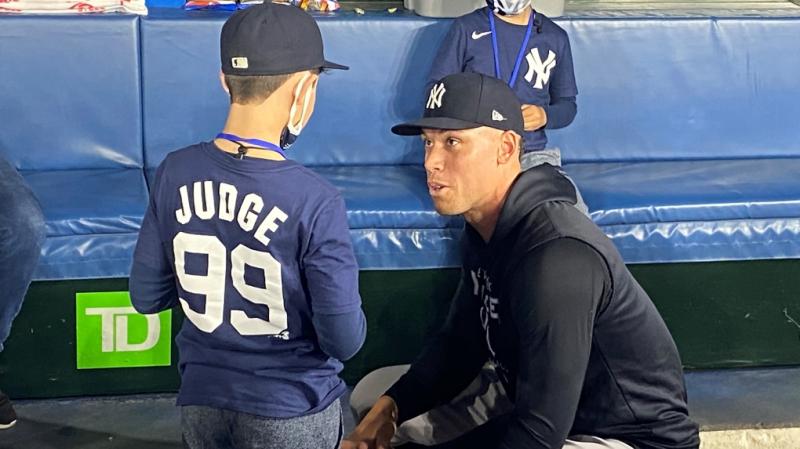 Nine-year-old Derek Rodriguez meets Yankees slugger Aaron Judge in the New York dugout on Wednesday afternoon at Rogers Centre before the start of American baseball action against the Toronto Blue Jays in Toronto on Wednesday May 4, 2022. The young New York Yankees fan's dreams came true on Tuesday night in Toronto when he was handed a home-run ball hit by Aaron Judge. THE CANADIAN PRESS/Gregory Strong

Tears of joy started to flow as Derek Rodriguez walked down the steps to field level at Rogers Centre on Wednesday, a day after a clip of the nine-year-old being handed an Aaron Judge home run ball went viral.

The youngster, sporting a Yankees hat, face mask and Judge T-shirt with No. 99 on the back, watched pre-game batting practice before meeting his hero in the New York dugout.

"I asked him who his favourite player was and he turned around and showed me his little jersey," Judge said. "That still gives me goosebumps to this day."

A beaming Rodriguez was accompanied by family members and Blue Jays fan Mike Lanzillotta, who snagged the ball that Judge hit into the second deck on Tuesday. Lanzillotta handed the ball to the youngster, who was overcome with emotion.

"That's a moment that's been seen around the world now," Judge said. "It just speaks volumes to the Blue Jays fans they have here. It's a cool little connection they've got."

Cameras captured Rodriguez , with mouth agape and eyes aglow, giving Lanzillotta a hug as the youngster broke down in tears.

"That's one of those moments that warms your heart," said Yankees manager Aaron Boone.

Rodriguez said he was "so happy" to be given the baseball, especially since it was Judge who hit the homer.

"All I can remember was I said, 'Thank you' and I hugged him," he said. "I don't remember anything else after that."

On Wednesday, Judge chatted with the boy for a few minutes in the dugout. The towering slugger signed the home run ball, gave him a pair of batting gloves and posed for pictures.

"I used to be in his position," Judge said. "That little kid, rooting on my favourite players and team. So that was a pretty cool moment that I definitely won't forget."

Yankees second baseman Gleyber Torres also spoke to the boy in Spanish. Rodriguez - named after Yankees Hall of Fame shortstop Derek Jeter - was born in Caracas, Venezuela, and his family moved to Canada about five years ago. 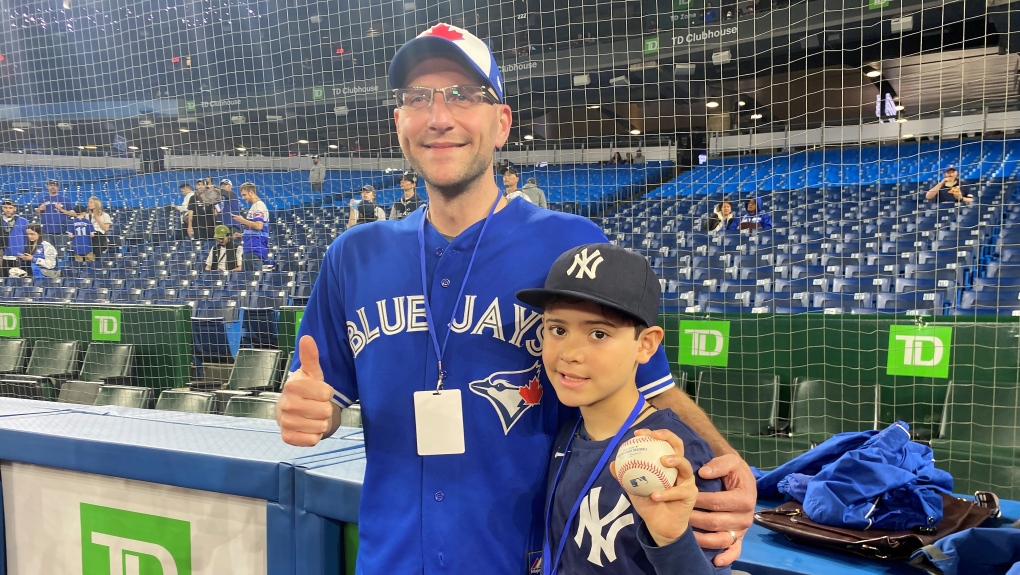 Nine-year-old Derek Rodriguez poses for a photo with Mike Lanzillotta, the Blue Jays fan who caught Aaron Judge's home run ball a night earlier and handed it to the youngster, before the start of American baseball action against the Toronto Blue Jays in Toronto on Wednesday May 4, 2022. THE CANADIAN PRESS/Gregory Strong

The youngster said he took his prized ball to school Wednesday.

"My friends and my teacher were really happy and they congratulated me," he said. "My teacher even made a presentation where she showed what happened, and people got to touch the ball. It was just amazing."

Lanzillotta said he tried to catch Judge's homer on the fly but it glanced off his hand and brushed his friend's face before falling into a hotdog tray.

He raised his arms in the air with ball in hand and then reached a few seats over to hand it to the youngster.

"That was probably one of the most memorable moments of my life," Lanzillotta said. "As soon as his hand got on that ball, it's like, 'That's it.' His eyes started watering up and he threw his arms around me."

With files from The Associated Press.

This report by The Canadian Press was first published May 4, 2022.

DAMN!!!  I sure prefer reading stories like this more than the never-ending political bullshit.  This is not the only proof that Toronto baseball fans (myself included) are not just "homers" but real fans of the game.  In fact I recall a game I watched in the Skydome where an opposing pitcher accomplished a no-hitter against the Blue Jays, and at the end of the game the Toronto crowd gave him a standing ovation until he came back out from the dressing room and the cheers and applause doubled when he tipped his hat to the crowd.

All home fans give a pitcher of an opposing team (or their own) a standing ovation when they no hit their team, it's not the Blue Jay fans. The only exception are Yankee fans, they boo the opposing pitcher, Yankee fans are assholes.

Professor Principal
2.1  seeder  Buzz of the Orient  replied to  MonsterMash @2    3 weeks ago

Oh, okay, I had no way of knowing that.

Here's a nice true baseball story for you Buzz. When my son was 7 in 1976, I took him to a Red Sox game at Fenway park. The Sox were playing the Detroit Tigers with Mark(The Bird) Fidrych pitching, Fidrych beat the Sox winning 6-2 giving up just 7 hits, my son and I had box seats right behind the Tiger dugout.

After the final out Fidrych noticed my son crying. He came over to us asking my son his name, he then said "Allen, I know you're disappointed the Red Sox lost, but if we had lost there would a lot of little boys crying in Detroit, you'll see the Red Sox winning lots of games and maybe a World Series, Fidrych then said "Wait here, I'll be right back" He came back with one of his gloves, autographic it and gave it to my son. Taking the time to cheer up a crying little boy turning his tears into a big smile, filled with the excitement of meeting and talking with a real live major league player was an exceptional class act by Fidrych. Fidrych was the American league rookie of the year in 1976

My son never used the glove afraid he if he did the signature would ware off, he's now 53 and still has it. After that game my sons 2nd favorite team was the Tigers, his favorite pitcher was Mark Fidrych.

Sadly, shortly thereafter, injuries derailed Fidrych's career, which ended after just five seasons in the major leagues. In the four following years he won just 10 games. He was washed up by 1980 spending just 5 years in the majors, but man, in the 1976 season he was a rookie sensation.

Thanks, MM, for a great story.  I once watched a game in Fenway Park - just being there was a memorable experience.  Baseball was important enough to me and my family to have gone on the pilgimage to Cooperstown, to tour Baseball's Hall of Fame.