By:   Rushdi Abualouf (The Intercept)

Israel won't investigate soldiers who fired in the direction of Shireen Abu Akleh, even though new evidence undermines their account of what happened.

Israel won't investigate soldiers who fired in the direction of Shireen Abu Akleh, even though new evidence undermines their account of what happened. Israel's military police have reportedly decided not to open any criminal investigation into the fatal shooting of the Palestinian American reporter Shireen Abu Akleh, even though newly released video appears to contradict the Israeli army's claim that the journalist was standing close to Palestinian militants when she was shot last week in the occupied West Bank.

Amos Harel, the senior military correspondent for the Israeli newspaper Haaretz, reported on Thursday that the decision not to investigate the Israeli soldiers who might have fired the fatal shot came after an internal review by the commando unit of the Israel Defense Forces "found six instances of IDF gunfire at armed Palestinians who were near Abu Akleh" as she reported on an Israeli raid on a refugee camp in Jenin.

According to Harel, the criminal investigations division of the Israeli army simply accepted the accounts of the soldiers who opened fire but "testified that they did not see the journalist at all and aimed their fire at gunmen, who were indeed nearby."

However, within hours of Harel's report, video posted on Twitter by Rushdi Abualouf, a Palestinian journalist for the BBC, appeared to contradict the claim that Abu Akleh was near any Palestinian gunmen engaged in a firefight with Israeli troops. The clip shows that Abu Akleh and several other journalists, all wearing blue vests marked "Press," were instead walking in the direction of the Israeli soldiers, as young men behind them stood around talking and joking, when shots suddenly rang out and Abu Akleh and a colleague were both hit.

New video shows the last few seconds before #ShereenAbuAkleh was shot killed , there was no shooting, and people were milling around in a relaxed way, her family accused idf but #Israel said the fatal shot could have come its forces or #Palestinian militants. pic.twitter.com/XjlRWLlSgN — Rushdi Abualouf (@Rushdibbc) May 19, 2022

As the writer and political analyst Yousef Munayyer explained on Twitter, "At the start of the video you can see the mood is relaxed, what they are saying isn't really clear mostly because they are chuckling." After multiple shots are heard and the young men scatter, a voice is heard saying, "Did anyone get hit?" and calling for an ambulance. Then, after more shots, someone shouts, "Shireen! Shireen!" and, amid frantic calls for an ambulance, the desperate warning: "Stay where you are, don't move!"

Video posted on the day of the killing last week appeared to show that people who tried to reach the mortally wounded Abu Akleh were fired on as they approached her.

Harel also reported that there were no plans for a real criminal investigation of the Israeli soldiers because "such an investigation, which would necessitate questioning as potential criminal suspects soldiers for their actions during a military operation, would provoke opposition and controversy within the IDF and in Israeli society in general."

This latest evidence of impunity for Israel's army outraged critics of the ongoing Israeli occupation, which imposes military rule over millions of Palestinians living in territory seized during war in 1967. "Israel is actively calling the bluff of all the countries that demanded it conduct an investigation," observed Edo Konrad, the editor of +972, an online, nonprofit magazine run by a group of Palestinian and Israeli journalists. "It knows no one will hold it accountable, that the money will keep flowing, while at the same time ensuring that no [sic] will ever 'truly know' who killed Shireen Abu Akleh," Konrad added.

While commentators in the United States asked how the Biden administration would react to the news that Israel's military was refusing to conduct the thorough investigation it had committed to just a week ago, senior American officials have gone out of their way in recent days to demonstrate what national security adviser Jake Sullivan called "ironclad support for Israel's security."

I had an excellent meeting with Israeli Minister of Defense Benny Gantz at the White House today. We discussed ironclad support for Israel's security, ways to address Iranian aggression, efforts to lower tensions between Israelis and Palestinians, and support for Ukraine. pic.twitter.com/wffWZ8pnB0 — Jake Sullivan (@JakeSullivan46) May 19, 2022

As Sullivan met with Israel's defense minister, Benny Gantz, at the White House on Thursday, the Israeli army was celebrating a friendly visit to Israel by Lt. Gen. Michael Kurilla, the new commander of U.S. Central Command.

The killing of Abu Akleh might not have shaken Israel's relations with the U.S., but it has destabilized the country's fragile coalition government. On Thursday, a left wing lawmaker cited the Israeli police attack on mourners at the funeral of the beloved Palestinian-American correspondent in Jerusalem last week as one of the reasons that she was withdrawing her support for the government, which could force new elections.

Ghaida Rinawie Zoabi, a Palestinian citizen of Israel who represents the Meretz party, wrote in a letter explaining her decision that her hope that Arabs and Jews could work together to bring about "a new path of equality and respect" had been dashed by a series of "hawkish, hard-line and right-wing positions" taken by the coalition's leaders. The sight of the police attacking mourners at Abu Akleh's funeral, and nearly causing them to drop the coffin, prompted her to make what she called "a moral decision" to stop supporting the government.

Shireen Abu Akleh, an American Photo Journalist of Palestinian Christian heritage, was shot and killed during an Israeli Defense Force operation inside the Occupied West Bank. An IDF spokesperson told reporters Abu Akleh was, "Armed with a camera".

Israel has declared there will be no investigation.

Why would Israel waste its time?  The only evidence that means anything is the bullet taken from the journalist's skull, and since the oh-so-trustworthy Palestinians are bound to produce any bullet they have that was fired from an Israeli rifle, why bother?  After all, here are your Palestinian heroes: 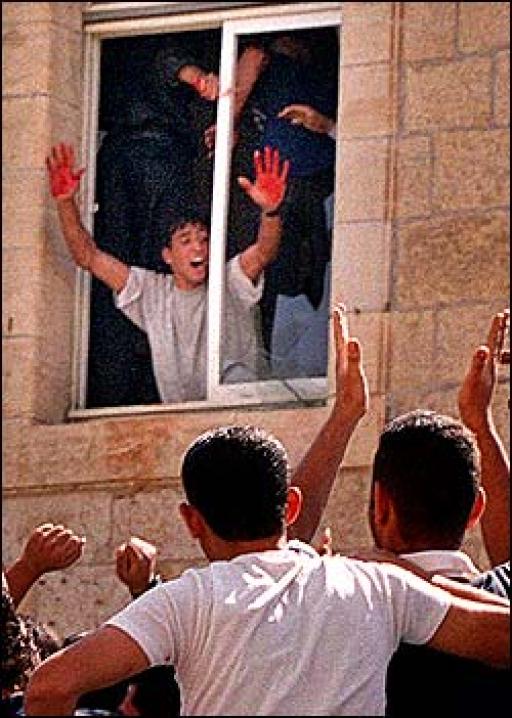 You know, the ones so well known for this....

Out of curiosity, why do you despise Israel so much?  Did you vote for Rashida Tlaib?

Then you should have no problem with an investigation by the IDF of it's soldiers actions.

I have no problem with it, but I'm sure they consider it a waste of time for the reason I already stated and because of the bias of the UN and the ICC and damn near everyone else the Palestinians are innocent victims and Israel is the devil incarnate.

Professor Quiet
3  Ronin2    one month ago

SSDD from all sides in this conflict.

Israel isn't going to do anything. The Palestinians know it; and the Israelis know it. It doesn't matter if the Palestinians produce the bullet for the Israelis or not. Israel will claim the bullet isn't the one that killed her; and it will promptly disappear. Spark the Palestinian outrage, protests, and riots. Cue up the disproportional Israeli response. Hamas will join in with all of the spare rockets they have managed to smuggle in from Iran. Setting Israel up for a military incursion into Gaza resulting in more dead Palestinian fighters and civilians (but at least we will get a couple of good youtube videos of tanks getting stuck on Palestinians cars in narrow streets).

It has already started during her funeral in Jerusalem. With Palestinians provoking Israeli troops by shouting anti Israeli slogans; and displaying the Palestinian flag on her coffin. The Israeli soldiers could have stood down and not gotten involved unless the Palestinians turned violent; but that would have broken the cycle. They can't break their damn cycle. They have their moronic schedule to keep. What will the Palestinians do to respond? Riot and throw rocks at Israeli troops? Send some suicide bombers into Israel? Or jump straight to Hamas rockets?

The international community will weigh in after an appropriate amount of time- and deaths (mostly Palestinian); but won't do anything. Who really wants to get caught between these two assholes? The British found out very quickly that maintaining peace was impossible between these two. Both sides chased them out. Think anyone else will have better luck? It would make for some hilarious political cartoons; and lots of dead and wounded peace keepers.

If ever there were two people that deserved each other it is the Israelis and Palestinians.

A pox on both of their houses until they grow the fuck up!

"What will the Palestinians do to respond? Riot and throw rocks at Israeli troops?"

I think you might have the order of events confused.  That wasn't the response, it was the provocation.  It was because of the rioting and the throwing of rocks at the soldiers that they moved in,  Similar reporting was used for the Al Aqsa riots.  But it's okay, Ronin2, demonizing Israel is expected, especially when these articles about the matter are posted from a Muslim-controlled source known to use incendiary language with a lame attempt to post that its author wasn't a Muslim.  LOL