After Uvalde, mass shootings continue over the weekend across the U.S.

After Uvalde, mass shootings continue over the weekend across the U.S. 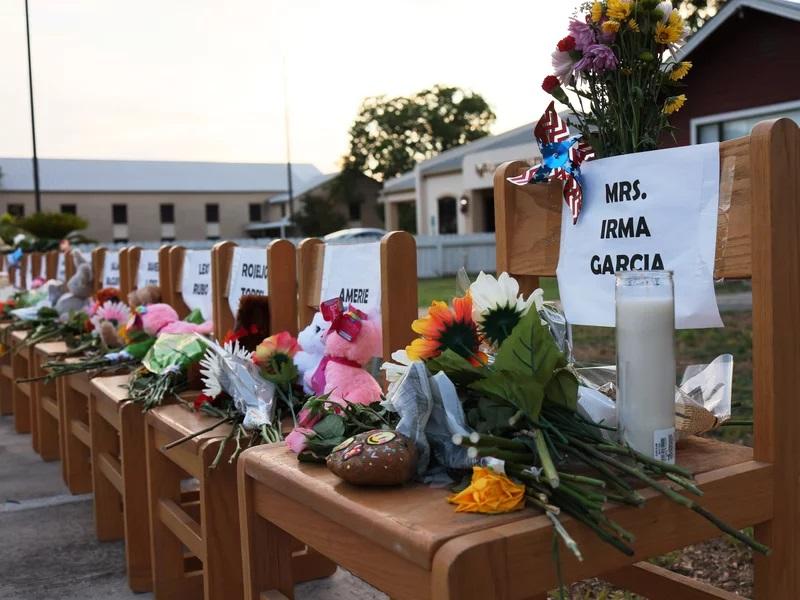 A memorial for the Robb Elementary School victims outside of Little Coyotes Day Care Center in Uvalde, Texas. Since Wednesday, another eight people have been killed and 45 injured in mass shootings.

At least eight mass shootings took place across the U.S. over the weekend following Tuesday's mass shooting in Uvalde, Texas.

Another three occurred between Wednesday and Friday.

According to the  Gun Violence Archive , an independent organization that collects data from over 7,500 sources, eight people have been killed and another 45 injured in the five days following the massacre at  Robb Elementary School in Uvalde .

A mass shooting, defined by the Gun Violence Archive, is an incident in which four or more individuals are shot and either injured or killed, excluding the gunman.

In Philadelphia, a man riding a mountain bike opened fire Wednesday night on a home where a young man and his date were preparing to leave for prom,  CBS3 Philadelphia reported . Police said the gunman shot a 19-year-old man, a young woman – also 19 – and the young woman's 34-year-old mother and 60-year-old man.

The boy was in critical condition and the other three victims were stable as of Thursday morning.

Six people were shot at a graduation party in Alabama early Thursday, The Anniston Police Department  reported on Facebook . None of the injuries were life threatening. Over 150 people, as young as 14, were at the party at the time. Stray bullets struck nearby vehicles, the police reported, and several firearms were recovered at the scene.

That same day,  ABC13 in Michigan reported  a 40-year-old mother and her three children – ages 3, 4 and 6 – were shot killed about 50 miles north of Grand Rapids. The mother's stepfather suffered a gunshot wound to the head and was in critical condition as of Saturday. A surviving daughter told ABC13 that the stepfather shot the children and then the mother.

In Chattanooga, Tenn., six people were shot a block away from the Tennessee Aquarium downtown,  Local 3 News  and CNN reported. Two of the six victims suffered life-threatening injuries. The victims were in the teens and early 20s.

Police in Colorado Springs, Colo., are investigating a shooting in a bar parking lot that killed one man and wounded three women,  KKTV11 News reported . Witnesses said the shots appear to have come from a moving vehicle.

ABC30 in California  reported  that three teenagers were wounded and one man killed in a shooting in Fresno Saturday night. The three teenagers expected to survive, but the man, in his 20s, died from his injuries.

Fox32 in Illinois  reported  that five people remain in serious condition after they were shot in Chicago's West Garfield Park. The victims range from 16 to 33 in age.

In Taft, Okla., a 26-year-old man is in custody in connection with a shooting at a crowded Memorial Day festival that left one 39-year-old woman dead and seven others wounded. The surviving victims range from 9 to 56 and are suffering from non-life-threatening injuries , Fox23 News reported .

Police in Detroit told WWJ News Radio that a group of three men and two women came under fire around 3:40 a.m. Two of the men who were struck are in stable condition, but the third is in critical condition,  WWJ News Radio reported . The women weren't shot, but received minor injuries from broken glass. (The Gun Violence Archive includes this incident on its list. NPR has reached out to the group to clarify its methodology in this case.)

The  Merced Sun-Star  in California  reported  Sunday morning that four people, two youths and two adults, were shot sometime after midnight Sunday. One of the victims was killed, one is in critical condition and two were treated for non-life-threatening injuries.

Just wondering if the gun worshippers on NT have the balls to admit that things in the US have gone too far, and NOT blame it on mental health issues, because why does the US have such greater health issues than any other civilized country.

So, that's your answer? Deflect to China who BTW, has had ONE school shooting since 2009?

So, that's your answer? Deflect to China who BTW, has had ONE school shooting since 2009?

You're kidding, right? Just because it's the government doing the shooting doesn't disqualify it. Sorry.

The topic is gun violence in America.  Are you saying that the American government is doing the mass shootings?  Trying to hide the truth by deflecting to by falsely claiming what other nations do is OFF TOPIC.

Why would you ask me if I spoke of America and then, in the very next sentence, demonstrate you knew I was speaking of China? What's the point of that?

As for deflection, there is none. You yourself included other countries when you said " why does the US have such greater health issues than any other civilized country." You can't make such a statement and then not allow discussion about it. Don't blame me for the parameters you yourself set. Especially when it is easy to prove wrong. Just look at world homicide rates per capita and you'll find that the US is near the bottom of the list.

And, whatever constitutes a 'gun worshipper' to you, they probably thought things have gone off the rails a long time ago, just not because of guns. And it is a mental health issue in my opinion. When you have a government actively supporting delusions such as yes, men can have babies too, there's going to be mental health issues. And before someone says something really stupid like I'm claiming people are killing other people because other people are saying men can have babies, I'm saying the people of this country are being encouraged to believe what they want to be true rather than what is true. And that is just one aspect of many concerning what is going wrong. And when some young man gets lost because forces in this country have done all they can to destroy the family unit and snaps, people such as yourself want to claim it wouldn't have happened if it were not for guns. It is very much a mental health crisis and it's getting worse.

If China has any brains at all, they'll just realize they only need wait for a decade or so and the US will cease to exist in any meaningful way. Our public and secondary education systems are producing functional idiots that will believe whatever emotional thing they are told to believe. Our children are falling farther and farther behind, educationally, and I believe it is intentional. There are powers in the world that don't want a power that actually stands for truth. Yeah, I know. We certainly had and have our faults, but the world is, or was, a better place because of the US. Imperfectly done as it was, we stood in the way of a lot of evil. Now our enemies destroy us from within. That's what always happens. The worst of us always rise to power eventually.

The only thing that will save the US is turning back to God.

(Off topic, personal insult, taunting - just having to moderate my own article's comments because the moderators refused to respond to the flag - Buzz of the Orient)