By:   Hugo Lowell, The Guardian 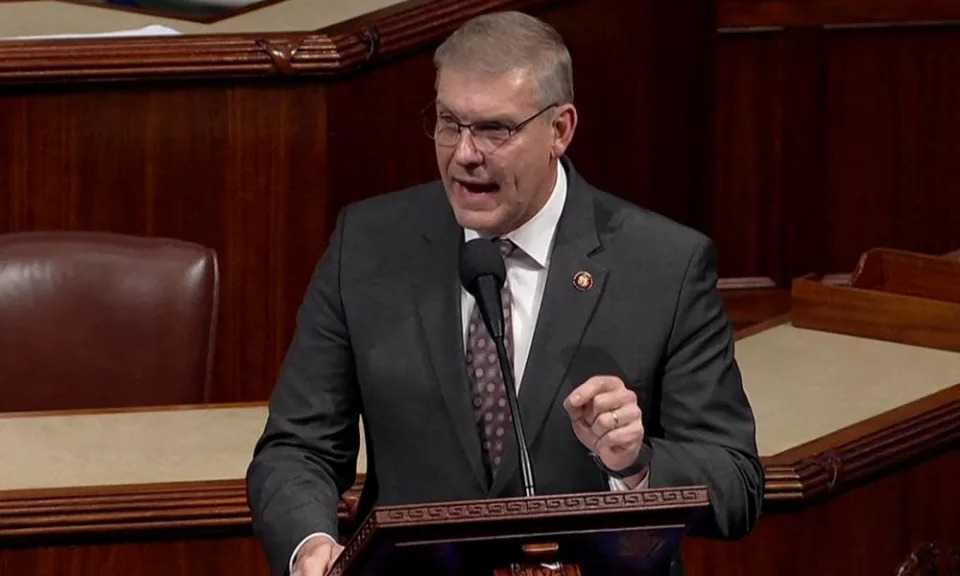 About 24 hours before the January 6 Capitol attack, a Republican member of Congress, Barry Loudermilk, led an unofficial tour through the House office buildings, passing by the security checkpoints located at the entrances to the tunnels leading towards the Capitol building.

The tour included a man who took photos of the tunnel entrances and the US Capitol police checkpoints, and then joined thousands of   Donald Trump   supporters the following day to march on the Capitol from the rally on the Ellipse.

That person’s activity was captured on security cameras and turned over to the House select committee investigating the insurrection at the Capitol. The panel   made the footage publicly available   on Wednesday in a letter demanding cooperation in its inquiry from Loudermilk.

The footage showing the man, and others, stopping to photograph the tunnels and checkpoints bolsters the allegation from Democrats that   the tour amounted to a reconnaissance event   in preparation for the Capitol attack.

The video evidence additionally challenged a recent letter from the US Capitol police chief, Tom Manger, who informed Loudermilk that “we train our officers on being alert for people conducting surveillance … we do not consider any of the activities we observed as suspicious.”

The tour was also notable because officially, tours were banned at the time due to Covid measures. The only people in the Capitol that day should have been members of Congress and staff, reporters, US Capitol police and official business visitors.

But members of Congress tend to bend rules as they see fit. For instance, two sources familiar with the matter said, a member wanting to give a tour could have given one name to the appointments desk and have an entire group let in.

The Loudermilk tour was cleared into a House office building by a staffer, the select committee said in the letter. The group would probably have been registered as an official visit to Loudermilk’s office but took the “scenic” route on the way in or out, the sources said.

The sources spoke on the condition of anonymity to discuss how the group might have been authorized to be in the complex. They added it was possible the names of the entire group were never recorded, but if they were, it would be in the possession of the House sergeant at arms.

Member-led tours – including to the Capitol dome, which then congresswoman-elect Lauren Boebert managed on 12 December 2020 – have since returned to the Capitol, though the procedure is more stringent and visitors must be submitted and vetted in advance.

According to the select committee, Loudermilk led an hours-long tour for approximately 10 people around the Rayburn, Cannon and Longworth House office buildings, as well as the tunnels leading from Rayburn and Longworth to the Capitol building itself.

“Individuals on the tour photographed and recorded areas of the complex not typically of interest to tourists,” the panel’s chairman, Bennie Thompson, wrote   in the letter to Loudermilk . “The January 5, 2021 tour raises concerns about their activity and intent.”

The select committee added that it had learned that some of the people on Loudermilk’s tour attended the Save America rally that took place on the Ellipse on the morning of January 6, where Trump spoke and urged his supporters to march to the Capitol.

Citing additional video clips obtained in its investigation, the panel said the man that took a photograph of a staircase in Longworth, located next to a hallway leading to one of the tunnels, joined the march to the Capitol and threatened members of Congress.

“There’s no escape Pelosi, Schumer, Nadler,” the man said as the Capitol was being breached, the video shows. “They’re coming in, coming in like white on rice for Pelosi, Nadler, even you, AOC. We’re coming to take you out and pull you out by your hairs.”

The select committee had   previously requested voluntary cooperation   from Loudermilk last month, which he flatly refused as he denied any wrongdoing. The latest request came with screenshots of the tour group taking photos of secure areas inserted in the letter.