Larry Summers: 'My best guess is that a recession is ahead' | The Hill

community » Discussions » Category » News & Politics » Discussion » Larry Summers: 'My best guess is that a recession is ahead' | The Hill

By:   Olafimihan Oshin (The Hill)

Former Treasury Secretary Larry Summers said on Sunday that his "best guess" is there will be a recession in the U.S. amid growing concerns about inflation. "Look, nothing is certain, and all economic forecasts have uncertainty. My best guess is that a recession is ahead," Summers told moderator Chuck Todd during an appearance on NBC's…

Former Treasury Secretary Larry Summers said on Sunday that his "best guess" is there will be a recession in the U.S. amid growing concerns about inflation.

"Look, nothing is certain, and all economic forecasts have uncertainty. My best guess is that a recession is ahead," Summers told moderator Chuck Todd during an appearance on NBC's "Meet The Press." "I base that on the fact that we haven't had a situation like the present with inflation above 4 percent and unemployment beyond 4 percent without a recession following within a year or two."

Summers also told Todd it's likely "that in order to do what's necessary to stop inflation, the Fed is going to raise interest rates enough that the economy will slip into recession."

"And I think that view, which was not a common view a couple months ago, is now the view of a number of statistical models and the view of a range of forecasters and I think will increasingly become a consensus view," he said.

President Biden said last Thursday that he believes a recession is "not inevitable" soon after the Federal Reserve announced it would hike interest rates at the fastest pace in nearly 30 years.

"First of all, it's not inevitable," Biden said in an interview with The Associated Press. "Secondly, we're in a stronger position than any nation in the world to overcome this inflation."

Current Treasury Secretary Janet Yellen said in an ABC "This Week" interview on Sunday that she doesn't believe that a recession is "inevitable."

Remember Summers saying the $1.9 trillion stimulus pushed by Democrats was too large and could risk overheating the economy?

Anyone recognize now that Biden's BBB would have been a big disaster if it had passed?

Last quarter saw the US economy shrink. The Atlanta Fed already forecasts no growth for the next quarter.

Two consecutive quarters of a shrinking economy = a recession.

And yet, some folks STILL insist that BBB would have been great for the economy.

I wonder where all the folks are who were touting the stock market gains under Biden have hidden since now the market is below where it was when Biden took office?

Where are those folks???

Does this mean they NOW recognize what a disaster this will be?

Does this mean they NOW recognize what a disaster this will be?

Most of the independents & democrats who voted for Biden now regret it. Only the far left embraces these horrible policies.

Either way the democrats now know they CAN'T let Biden be the candidate again.

Either way the democrats now know they CAN'T let Biden be the candidate again.

Democrats have a dearth of viable options, especially if they (again) use identity politics as a magnet rather than qualifications. From what I've read so far, their list of possibilities consists of Kamala, Buttigieg, AOC, Susan Rice, Michelle Obama, Bernie, Stacy Abrams, Gavin Newsom, Cory Booker, Amy Klobuchar, and ... Hillary.

It probably wouldn't have helped, but there are just a lot of things coming to a head all at once fueled by the pandemic.

Economists are making wild assed guesses because the pandemic has grossly distorted the economy.  Keep in mind that part of these dire prognostications are artifacts of how overall economic performance is measured.

There is no doubt that emergency spending by the Federal government pumped up the economy by a very sizable amount.  The Trump administration pumped a lot of money into the economy and still experienced a 2.2 pct decline in GDP.  So the emergency spending in 2020 didn't distort the economy.  The Biden administration pumped almost 10 pct of GDP into the economy so it's not surprising that GDP growth in 2021 was exceptionally high.  Now that the emergency measures are expiring the GDP will shrink.  Cutting government spending really does place downward pressure on GDP.  Arguing over whether or not that emergency spending was necessary won't change the fact that reducing government spending is going to lower the GDP.  That's built into how performance of the economy is measured.  And the decline in GDP is going to look like a recession.

Only a portion of current inflation has been driven by emergency government spending.  The economy was so distorted by the pandemic (and mandated mitigation measures) that it's difficult to determine how much.  A return to normal activities will very likely cause shifts in employment patterns and consumption patterns.  And excessive inventories and shortages arising from the pandemic are still distorting the economy.  Those distortions have inhibited the ability of business, in general, to plan for and adapt to disruptions.  At least some of the current inflation is due to a confused, disoriented, and distorted economy.

The reliable tools of economists don't work at the moment because this is not a normal economic situation.  Economists are making wild assed guesses and hoping for the best.  The problem has not been caused by the monetary system so using monetary policy to address current conditions is like playing darts blindfolded.  And if these economists start throwing too many darts, somebody is going to get hurt.

I wouldn't be surprised if we encounter a recession, there are multiple issue all coming to a head at one time. The pandemic definitely fucked things up big time around the world, and as Nerm said, economically things got very distorted and thrown totally out of whack by it. Supply really has not yet caught up to demand.

Professor Principal
4  JBB    one week ago 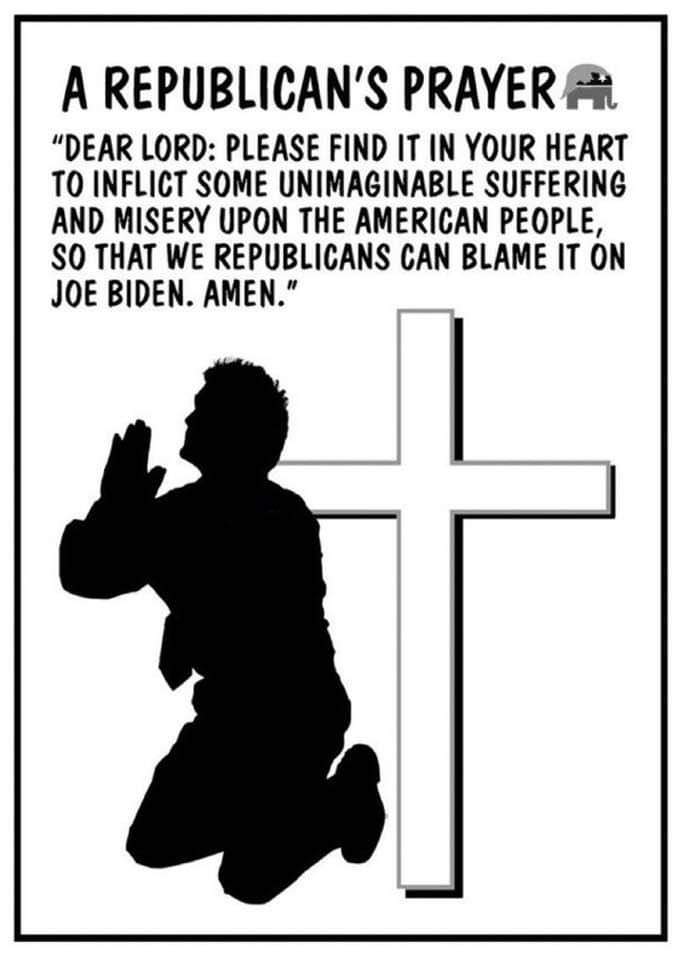 If that was the prayer than it worked and has already been answered and it is indeed Joe's fault. What is the dem prayer, that everyone gets to pick their own pronoun as the country goes to shit?