Amid record inflation, critics had fun at the expense of Vice President Kamala Harris, whose upcoming DNC fundraiser has only gotten cheaper for attendees.

Twitter had a field day with the news that the Democratic National Committee (DNC) was slashing the hefty price tag for a photo-op with Vice President Kamala Harris.

Harris was slated to appear at the DNC's Women's Leadership Forum this year as a headliner with a reported $15,000 price tag for a photo with the vice president.

The event ended up not selling enough tickets and was postponed, along with the five-figure price tag for donors to have their picture taken with a sitting public servant.

However, those who want a picture with Harris at an upcoming DNC fundraiser can now reportedly do so at a fraction of the price.

"DNC is slashing prices for a photo w/ Kamala Harris. Tickets for a photo with the VP at the Women's Leadership Forum started at $15,000, but it failed to sell enough tickets & is being postponed. VP's June fundraiser in Cali is charging $5,000 for a photo," Puck's Tara Palmeri tweeted Tuesday.

At a time of record-high inflation with prices soaring across the board, critics had fun with the notion that the only thing that has gotten cheaper during the economic crisis is a photo-op with the VP.

"Nice to know that even with inflation, some stuff is getting cheaper," podcaster Noam Blum tweeted.

"There are price cuts in at least one sector. Who says Dems have no plan to address inflation?" Substack writer Matt Stoller similarly joked.

"As has always been the case, there are a variety of ticket levels for every event as is pretty standard for finance events," Wessel said. "We've raised record amounts of money with help from both Vice President Harris and President Biden, so we're going to continue to do what clearly works well for the party and our donors."

Conversely, Will O'Grady, a spokesperson for the Republican National Committee (RNC), told Fox News Digital that if "Democrats focused on fighting skyrocketing costs facing Americans like they do cutting prices on a photo with Kamala Harris, inflation wouldn't be a problem."

The clearance price on a photo with Harris comes as she faces an abysmal 39-percent approval rating, three points lower than her boss' approval rating.

Harris' tenure in office has been rocky from the start. She has long been criticized by Republicans for her inaction on immigration after President Biden appointed her to be his border czar.

The VP has repeatedly gone viral for what critics call "word salad" in which she delivers remarks that appear to have little substance.

Biden's No. 2 has also been dogged with bad headlines about the apparent exodus of staffers who've left her office over the past several months and reports of internal clashing with Biden's aides.

On top of all that, amid whispers from Democrats about Biden potentially not running for reelection in 2024, Harris is often being dismissed as the natural heir apparent, with Democrats like Transportation Secretary Pete Buttigieg possibly leap-frogging her to the Oval Office.

Joseph A. Wulfsohn is a media reporter for Fox News Digital. Story tips can be sent to joseph.wulfsohn@fox.com and on Twitter: @JosephWulfsohn.

Harris was slated to appear at the DNC's Women's Leadership Forum this year as a headliner with a reported $15,000 price tag for a photo with the vice president. The event ended up not selling enough tickets and was postponed, along with the five-figure price tag for donors to have their picture taken with a sitting public servant.

Gee, if Democrats can't sell tickets to women for their own event, what does that tell us about how popular the VP is?

Freshman Expert
2  magicschoolbusdropout    one week ago

I suppose picking a "Liberal Label" for VP, isn't as popular as Democrats thought !

Sophomore Silent
3  JaneDoe    one week ago

So it’s kind of like a Walmart rollback. Not sure it’s going to help.

So it’s kind of like a Walmart rollback. Not sure it’s going to help.

I was thinking more along the lines of an old K-Mart blue light special.

Professor Guide
4  Sunshine    one week ago

Well that is embarrassing.

PhD Guide
5  Jeremy Retired in NC    one week ago

This is what happens when you put the person the people rejected in as VP.

Is this yet another signal as to how out of touch with voters Democrats are? 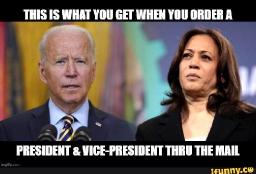 I hate to admit it but that is actually a funny meme.

I reject the implied premise that mail in votes during the pandemic were a form of cheating but it's funny.

Sophomore Quiet
8  squiggy    one week ago

Ok, five bucks for a Polaroid of her kissing ass.

Maybe if Al Franken charged 15k a pop he'd be president now instead of hosting his own podcast.