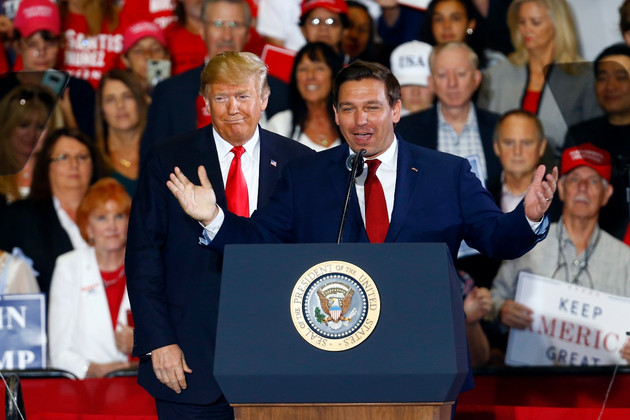 TALLAHASSEE, Fla. — Florida Republican Gov. Ron DeSantis has plenty of advantages ahead of his November reelection. More than $100 million in the bank. A growing statewide Republican voter advantage. Massive popularity with the conservative base.

According to four people connected to the governor and former president, DeSantis has not asked Trump for a formal endorsement and isn't planning to. It's a clear sign that DeSantis, who more than four years ago was a little-known congressman from northeast Florida, has risen high in the GOP stratosphere.

DeSantis' reluctance to seek the former president's public support comes as the Florida governor prepares for a likely 2024 White House bid, even if Trump also runs in 2024 — setting up a potential clash between two powerful figures in the GOP.

"[DeSantis is] a Cat 5 hurricane in Florida politics — and in a good way if you are a Republican," said Anthony Pedicini, a veteran GOP consultant in Florida. "He is a force of nature."

Trump has used his endorsement as a cudgel against Republicans who voted to impeach him after the Jan. 6 riot in the Capitol, including Rep. Tom Rice (R-S.C.), who lost his primary to Trump-backed state Rep. Russell Fry. While Trump's endorsement has the power to make or break a candidate, this election cycle has seen his influence waning in some races.

In Georgia, for example, the candidates who supported the former president's attempts to overturn the election results and won his endorsement failed to beat Republican incumbents, including Gov. Brian Kemp and Secretary of State Brad Raffensperger.

An endorsement from Trump, however, would not likely change DeSantis' frontrunner status in Florida among his Florida supporters. Polls have consistently shown him leading his Democratic rivals. In straw polls in Wisconsin, Nevada and the annual Western Conservative Summit survey, DeSantis has even topped Trump.

Dave Abrams, a spokeperson for DeSantis' reelection campaign, declined to comment on whether the governor is seeking Trump's backing.

A person with knowledge of Trump's endorsement process who was granted anonymity to speak freely said that if DeSantis asked for his support, "he would endorse him."

Trump has already handed out endorsements to numerous Florida Republicans on this year's ballot, including Sen. Marco Rubio as well as Attorney General Ashley Moody and Chief Financial Officer Jimmy Patronis, two statewide officials who have no primary opponents.

DeSantis' decision to forgo a Trump endorsement is a stark contrast from four years ago. In 2018, DeSantis was seen as a long shot challenger, running against then-Agriculture Commissioner Adam Putnam. Putnam had backing from the Republican establishment and a money advantage. But DeSantis shook the foundations of the race when he picked up a crucial endorsement from Trump ahead of the primary. Desantis even ran a notable television ad that depicted him reading the former president's book "The Art of the Deal" to one of his kids.

The strategy worked and DeSantis crushed Putnam as Trump supporters in Florida flocked to his side. Trump also often takes credit for Desantis' win, once saying, "he ran, I endorsed him, his numbers went through the roof."

A lot has changed in four years. DeSantis is now a nationally-recognized Republican figure who was highly praised by conservatives during the pandemic for fighting against shut downs and Covid-19-related mandates. He has also very publicly `battled liberals over education, race relations and LGBTQ issues. DeSantis has received small-dollar donations from individuals in all 50 states and millions of dollars in cash from big name GOP donors like Texas oil baron Kelcy Warren, who also donated to Trump.

While there have been stories published about the budding rivalry between DeSantis and Trump, they have not stopped talking to each other. DeSantis, along with his wife Casey DeSantis, attended a star-studded wedding held at Mar-a-Lago in late April where they were seen chatting briefly with Trump and his wife, Melania.

Still, DeSantis has sidestepped questions about his plans for 2024 and whether he would refrain from running for president if Trump seeks another term. When asked directly on Fox and Friends recently if he would run if Trump runs, DeSantis said "nice try" as he brushed aside the question.

This reticence has not gone unnoticed. One Republican donor to DeSantis, who was allowed to speak anonymously to discuss the sensitive matter, said Trump has privately questioned DeSantis' loyalty while also raising questions about whether DeSantis is personable enough to win over voters.

Yet Christian Ziegler, vice chair of the Republican Party of Florida, said all the intrigue about whether Trump will endorse DeSantis is part of "false narratives" pitting the two Republicans against each other.

"Republicans understand what's going on and we won't be fooled," Ziegler said in a text message. "We aren't just unified, but we are ecstatic to be living in a state that is governed by DeSantis and counts President Donald Trump as a resident."

The showdown between Trump and Desantis begins!

President Ron. Better get used to it.

Freshman Quiet
2  afrayedknot    one week ago

Two narcissists cut from the same cloth, though DeSantis is much more dangerous as he is not the blow hard idiot that is trump. Not sure his Florida model will play nationwide. The ensuing cannibalism will be interesting to watch unfold.

Professor Principal
2.1  seeder  JBB  replied to  afrayedknot @2    one week ago

Not mere narcissism. They are malignant variants!

Professor Guide
2.2  Greg Jones  replied to  afrayedknot @2    one week ago

Why is DeSantis "dangerous", in your view?

Yep...If he wins the nomination, DeSantis will suddenly be much worse than Trump , who it turns out wasn't that bad.   Desantis will become a  Nazi who is an existential threat to this country and humanity,  just like Mitt Romney and John McCain were in their day.

Somebody should check with Biden to see if Romney is still be working on his plan to put black people back in chains.