Lyft officials said they are exempt from the Americans with Disabilities Act and don't have to cater to people with nonfolding wheelchairs.

In 2018, Ansel Lurio found himself trapped in a snowstorm after leaving a dentist appointment in Westchester County, New York. Lurio usually rode home in his motorized wheelchair, but this time the snow made it impossible. He said the buses weren't running and there were no paratransit vans around, so he turned to Lyft.

"If you look for accessible vehicles in Westchester, it tells you none are available," said Lurio, 37. Lurio, who has duchenne muscular dystrophy, a progressive disease that causes the muscles to weaken and atrophy over time, said he relies heavily on his motorized wheelchair to get around. That day, he felt he had "no other choice" but to call an ambulance. (Uber's website says it offers nonfolding wheelchair accessible service in New York City, but not Westchester.)

"The ambulance could only bring me to a hospital, not my home," he explained. "I was stuck at the hospital overnight having to explain that I wasn't sick, I just needed an ambulance to get home. It was an awful night at the hospital. If I'd been able to get a Lyft ride, none of that would have happened."

Lurio is one of many people across the country who say they are unable to use Lyft because the ride-sharing company won't make wheelchair accessible vehicles (or WAVs) available to passengers with nonfolding wheelchairs in areas outside of where Lyft is required by state laws to do so (or "non-access" regions, as disability rights groups call them). Advocates aren't seeking any monetary damages but, instead, are asking Lyft to help WAV drivers reach riders in need by both allowing drivers to categorize their vehicles as WAVs, and turn off any app blockers that would prevent riders from selecting the company's accessible ride option in these non-access regions.

A handicap parking permit inside the van of Ansel Lurio.Laurel Golio for NBC News

"Lyft needs to provide wheelchair accessible service to everyone. To do that, all Lyft has to do is turn off the blocker — or toggle — that prevents people from identifying their vehicles as WAVs and prevents riders from requesting WAVs," said Frei-Pearson, an attorney for Harriett Lowell, who filed the original class action suit against Lyft alongside disability rights group Westchester Disabled on the Move Inc (WDOMI). "Remove the toggle everywhere else and you'll give a lot more WAV rides."

Lyft has been embroiled in the class action suit over the matter since 2017, when Lowell and WDOMI sued the company for failing to accommodate people with wheelchairs that don't fold. Now, in court filings obtained exclusively by NBC News, which will later be made public, Lyft is arguing that it is not subject to regulations in the Americans with Disabilities Act that would require it to ensure the availability of wheelchair accessible vehicles because it is a technology company, not a transportation business.

"Lyft is not a government institution. It is a private company that has no obligation to provide WAVs on its platform," Lyft officials wrote in a private federal court filing obtained by NBC News. Lyft officials will appear in court over the suit on Aug. 29 in White Plains, New York.

According to court documents filed by Lyft and its website, the company offers WAV services through an "Access" ride option on the app in the nine cities that require the company to do so. In regions where this "Access" mode isn't available, riders are directed to other transportation options, according to court documents. Lyft said in the filing that it can't simply "turn on" "Access" mode to connect riders with WAV drivers in other areas because there aren't enough of those vehicles.

Joshua Cooper, a participant in the pending class-action lawsuit against LYFT, attempts to request an accessible vehicle through the LYFT app with no success.Laurel Golio for NBC News

A Lyft spokesperson told NBC News: "There is an extremely limited supply of these specially manufactured vehicles across the country, and even fewer among the population of rideshare drivers. Despite these obstacles, we're constantly working to improve reliability of the service and find solutions to address supply challenges." The company currently works with third-party providers to supply WAV vehicles and works to recruit drivers who already have WAVs, but company officials hold that these solutions aren't feasible nationwide.

Additionally, in the response to the class action suit, filed on July 29, Lyft officials highlighted driver availability as another reason behind their inability to fulfill the WAV requests. They stated that areas with smaller populations, like suburbs, tend to have less drivers. Additionally, the high cost of wheelchair accessible vehicles (converting a van into a WAV could cost up to $30,000) and the "small" population of people in the U.S. who use nonfolding wheelchairs also contributed to the lack of WAV service. "Where the supply and demand for service is very low, the platform does not perform well and there is very low, or in some cases no, use," Lyft officials said in court documents. The American Academy of Physical Medicine and Rehabilitation says roughly 5.5 million adults use a wheelchair for mobility — both foldable and nonfolding. However, a lawyer for the disability rights advocates said the number of drivers with WAVs isn't as big an issue as Lyft claims.

"There are Lyft drivers who have wheelchair-accessible vehicles, but if you're not in an access region where Lyft is forced by regulations to provide service, Lyft won't even let you advertise you have WAVs," Frei-Pearson told NBC News. In court documents filed earlier this year on behalf of the plaintiffs, disability rights advocates said that, since 2019, hundreds of Lyft drivers with WAVs have attempted to provide service in Westchester, only to have the company block riders from seeing that there are accessible vehicles in the area.

"We're not asking Lyft to do anything very difficult, we're asking them to stop discriminating. Very concretely, stop blocking wheelchair accessible service. Lyft allocates enough resources to hit the minimum targets, then it pulls back all resources," Frei-Pearson said.

This isn't the first legal dispute Lyft has seen over accessibility. Lyft, Uber and Via settled a suit against New York City in 2018 in which they opposed rules that would impose accessibility requirements on the ride-share companies. In the end, they agreed to provide wheelchair-accessible riders to passengers quicker. In 2020, Lyft settled a lawsuit brought by the Department of Justice that required the company to accommodate riders who use foldable wheelchairs and pay a fine to four people who accused the company of discrimination. Lyft did not admit any wrongdoing in the 2020 suit.

Although Uber offers additional ride options for people with nonfolding wheelchairs in some cities — like Chicago, New York City, Philadelphia and Washington, DC — in July a judge ruled against New Orleans residents in a suit that would have required Uber to provide nonfolding wheelchair-accessible service in the city. Uber also lobbied against an ordinance to require Uber to provide WAV service in New Orleans, according to WLBT.

Of the 13.4 million adult Americans living with travel-limiting disabilities, 3.6 million are unable to leave their homes due to their disability, and people with mobile disabilities are less likely to work than those without due to travel limitations, according to the National Aging and Disability Transportation Center. People with travel-limiting disabilities are also less likely to have their own vehicles or access to vehicles that meet their needs, the center reported.

Joshua Cooper, 28, lives in Little Falls, New Jersey, and has Type 2 spinal muscular atrophy, a genetic neuromuscular disorder that impacts motor skills. Cooper said he has unsuccessfully tried to use Lyft hundreds of times and Lyft's "Access" feature only appears on the app for him in designated areas with registered WAV drivers. He said while the option would appear for him in New York City, less than an hour from his home, "Access" mode would not even appear in his New Jersey neighborhood — some 20 miles away. "It doesn't come up as an option," he said.

"I'm completely disabled, the only thing that's not is my brain. I always have to rely on other individuals to drive me to drop mail off or pick up necessities at the grocery store, whereas everyone else in life can use Ubers and Lyfts. It has robbed the disabled community," Cooper said. He said he has never been able to use Lyft.

"It literally just says 'connecting to driver' for several minutes. One time I sat there for 30 minutes. A lot of times it will just come up with 'no drivers in the area.'"

Now, Lyft is planning to convince a White Plains judge that they are exempt from the ADA and, in court documents, cited Title III of the Civil Rights Act, which prohibits discrimination by public accommodations on the basis of a disability. Lyft argues in the filing that it is a private company, and not a "public accommodation." But Laura Rothstein, a law professor who focuses on disability discrimination at University of Louisville, said Lyft officials may be misinterpreting the law.

Joshua Cooper photographed at his van outside his home in Little Falls, NJ.Laurel Golio for NBC News

"Actually, Title III only applies to private companies that provide programs to the public. It's kind of weird because of the 'public accommodations' title, but the issue is, are they even subject to Title III? And I think they are," she said. "I don't think they're going to win on that."

App-based rideshare companies like Lyft and Uber have long made the argument that they aren't in the transportation business and shouldn't be held to certain accessibility standards. James Weisman, who is the former president and CEO of United Spinal Association and helped craft the ADA, said Lyft's claims don't hold water. "When people call Lyft, they're not calling for tech. They're calling for a ride. Maybe Lyft internally thinks of itself as a tech company, but users think of Uber, Lyft, and the like as ride-share companies. "What we're allowing Lyft to do is say … 'We don't care about providing service to this community.'"

As for wheelchair-users like Lurio and Cooper, they say such legal battles only prolong inaccessibility and don't take into account the ways this discrimination impacts people every day.

"It's unreasonable and ridiculous that I can't get a ride from Lyft in Westchester like anybody else," said Lurio, who is a board member of Westchester Disabled On the Move. "I think they have the view that people with disabilities are not a customer base that's worth serving. That's wrong and ridiculous."

Professor Principal
1  JBB    one month ago

Gotta say, this is bullshit. The whole idea of the company is people use their own vehicles to give other people a ride. They can't control who signs up to be available.

Also at the beginning of this article, why is the person making a dentist appointment without having any plan. Oh I am going to the dentist but have no way home and it is snowing, I will be just fine....Then using emergency service to try to get home...

Junior Principal
3  Hallux    one month ago

Ah the joys of a single payer system: 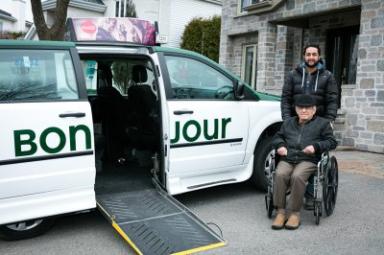 Professor Principal
4  Nerm_L    one month ago

Sounds like an issue for Mondaire Jones and Jamaal Brown.  At least until the next Congress is seated.

It's rather telling that these grievants run to the courts rather than seek assistance from elected representatives.  Apparently autocracy is more desirable than democracy.