Raphael Warnock's income doubled during his first year in Senate

Sen. Raphael Warnock (D-GA) saw his income more than double during his first year in the Senate, according to his recently filed financial disclosure.

Sen. Raphael Warnock (D-GA) saw his income more than double during his first year in the Senate, according to his recently filed financial disclosure.

The $164,816 salary Warnock received from the Senate in 2021 represented just a fraction of the total income he earned throughout the year, his financial disclosure shows. The Georgia Democrat also received $120,965 for his service as the head pastor of Ebenezer Baptist Church in Atlanta and a $243,750 advance for his memoir, "A Way Out of No Way."

Warnock had criticized Loeffler during his 2020 campaign for using her position in the Senate for her personal enrichment.

Warnock took advantage of a little-known Senate loophole to rake so much from Ebenezer Baptist Church in 2021.

House and Senate rules prohibit lawmakers from earning more than 15% of their congressional pay in outside salary, which in Warnock's case would have been around $25,000 in 2021.

But Warnock was able to collect $120,965 from the church in 2021 because he classified all the proceeds as benefits from the church. Benefits are not subject to the outside income limits, the Atlanta Journal-Constitutionreported.

Most of the pastoral benefits Warnock received in 2021, $89,000, came in the form of housing payments that the senator's campaign described as a "personal parsonage allowance."

Warnock's Atlanta home is worth just over $1 million, according to Fulton County property records reviewed by the Atlanta Journal-Constitution.

The Senate Ethics Committee signed off on Warnock's pastoral benefits package, he reported in his 2021 financial disclosure.

Warnock's financial boon in 2021 came amid allegations from his ex-wife in February that year that the senator had left her "financially strapped" over unpaid child care expenditures despite his "substantial" increase in income from his new position in the Senate.

Warnock faces Republican challenger Herschel Walker in this November's midterm elections. Warnock held a slight polling lead of 47.6% to Walker's 43.2% in July, according to the RealClearPolitics average.

I'm sure the usual suspect(s) will be along shortly to properly disparage and denounce this hypocritical "thumper"..... or not...

I'm sure the usual suspect(s) will be along shortly to properly disparage and denounce this hypocritical "thumper"..... or not...

Hypocrisy won't allow them to condemn a Democrat for anything. And unless I am mistaken, 'thumper' only applies to people who are religious and vote Republican.

Junior Principal
2  Hallux    one month ago

Junior Participates
2.1  seeder  GregTx  replied to  Hallux @2    one month ago 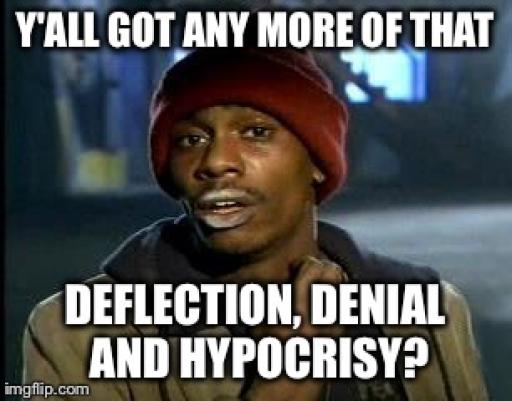 Now, that there would be a real point IF the article was about Hershel Walker.

It isn't, so your statement is mere deflection.

The article is a deflection. You'll figure it out eventually.

The seed itself is a deflection?  Please do tell....

The seed itself is a deflection?

Some folks are convinced of an illusion that anything negative posted about Democrats is merely deflecting from SOMETHING.

I'll let you know when they decide WHAT we are deflecting FROM!

Assuming that one day THEY figure it out.

The article is a deflection.

Freshman Principal
2.3  Drinker of the Wry  replied to  Hallux @2    one month ago

Exactly, many football stars waste their money and don't get endorsement offers.

Is Warnock the lesser of two evils or simply the only available alternative to electing a moron to represent the people of Georgia in the US Senate?

Professor Principal
3.1  Vic Eldred  replied to  JohnRussell @3    one month ago

A radical or a moron?

Let's vote for the moron!

Well, Georgia DOES have TWO Democrats as Senators, so I think we see what was elected.

Let's vote for the moron!

You apparently always do.

I assume you would vote for Warnock on the theory that his opponent is a moron. Or do you want more morons in the senate?

Warnock qualifies as both a radical and moron...

It's very simple John. A radical leftist does more damage than a moron.

Picture Biden without all the radical policies. He wouldn't be that bad at all.

if elected, walker will perfectly represent the trump contingent of the GOP, both in and out of the senate chambers.

Since Hallux seems incapable of clarifying a simple statement, perhaps you can? Somehow I doubt it.....

Believe it or not the most recent poll has Walker ahead:

Amazing, given all the voter blocking the repubs did there.

Junior Participates
4.1  seeder  GregTx  replied to  Drinker of the Wry @4    one month ago

Amazing, given all the voter blocking the repubs did there.

Yeah, all that fake voter suppression has really been proven, huh?

Professor Principal
5  CB     one month ago

I am just going to anticipate there are no good people, saints of the Most High Ground, speaking ill of a fellow believer!  /s

Leaving this to God to confirm.

Why would anyone speak ill of a fellow believer?

Good. Just checking that the brotherhood and sisterhood of faith is being genuine as the Lord loves us to be.

Hypocrisy should not be mentioned amongst the faithful ones who carry the mantle of truth near to their breasts.