‘Balakliya is Ukraine! Today, the Ukrainian flag was raised,’ said the Kharkiv regional governor Oleg Sinegubov on Telegram. ‘Boys and girls of the armed forces, today you are creating a new history of free Ukraine, we are proud. To be continued…’

T housands of Russian troops have retreated in the face of   Ukraine ’s lightning-fast counter-offensive in the north-east of the country.

For days, Ukrainian troops have been advancing through Kharkiv in a military operation that could be a turning point in the nearly   seven-month-long war .

Russia ’s defence ministry confirmed today its forces have retreated from Izyum, a key military stronghold, and Balakliya after   Ukraine   burst through its front line.

The ministry said Moscow decided to ‘regroup’ in Donetsk, within the Donbas region, in what it claimed was a pre-planned move.

Only six months ago, Russian troops seized control of Izyum after a weeks-long battle and planned only yesterday to beef up the city’s defence. 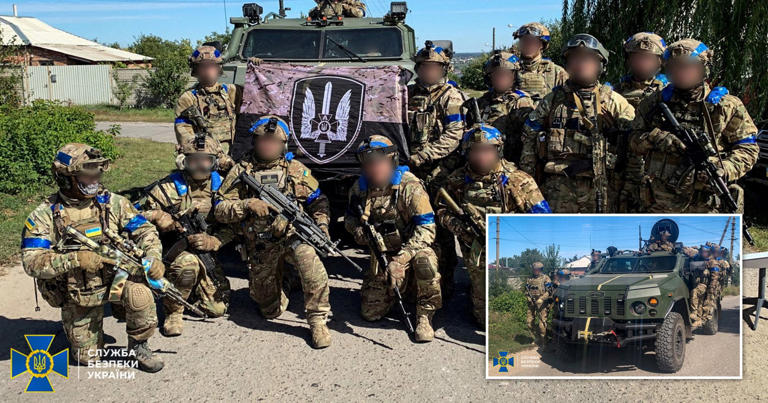 It remains unknown, however, just how secure the win is or how long it will last.

The announcement came after Britain’s Ministry of Defence (MoD) said in a briefing Ukrainians burst through as much as 50 kilometres through   Russia ’s chokehold of Kharkiv.

‘Russian forces were likely taken by surprise. The sector was only lightly held and Ukrainian units have captured or surrounded several towns,’ the MoD said.

The Security Service of Ukraine, known as the SBU, shared photographs of troops in front of the city’s council building on Telegram.

Personnel could be seen displaying the flag of the 92nd Separate Mechanised Battalion, a unit of the Ukrainian Ground Forces.

‘We will free our land to the last centimetre! We move further! Glory to Ukraine!’ the agency said.

And it wasn’t just Kupiansk – Ukraine’s Ministry of Defence tweeted: ‘The town of Balakliya, Kharkiv region, is liberated by Ukrainian troops!’

The ministry shared video footage of troops raising a Ukrainian flag in the town centre.

‘Boys and girls of the armed forces, today you are creating a new history of free Ukraine, we are proud. To be continued…’

‘We are returning the Ukrainian flag and protection for our people everywhere,’ he said.

Across the last week, Ukraine has taken back at least 2,500 square kilometres of once pro-Kremlin Kharkiv, according to the US think-tank the Institute for the Study of War.

How many times can the Russian military fail?

Excellent news. The Russian army and its leadership is shown to be inept and rudderless.

Russian Soldiers Fleeing 'So Fast They Left Half Their Equipment': Official

R ussian soldiers are fleeing so rapidly as a   Ukrainian counteroffensive reclaims broad swaths of territory   that they are leaving behind "half of their equipment," according to a Ukrainian official.

As the war marked 200 days on Sunday, significant gains by Ukraine's forces in the country's east have forced Russia to pull back troops from the region to avoid being surrounded.

Russian soldiers have retreated so hastily that they have left behind a significant amount of weapons, according to Anton Gerashchenko, an adviser at the Ukrainian Ministry of Internal Affairs.

Gerashchenko tweeted a video purporting to show a Russian tank that was left behind in Izyum, a major base for Russian forces in the Kharkiv region.

Today our military accepted first lend lease supplies from Russia in Izyum (that's a joke, of course. I will mark my jokes for some time now).

Russian soldiers fled so fast they left half of their equipment.   pic.twitter.com/6WeHs1LZ3A

"Today our military accepted first lend lease supplies from Russia in Izyum (that's a joke, of course. I will mark my jokes for some time now)," he wrote alongside the clip. "Russian soldiers fled so fast they left half of their equipment."

Ukrainian forces have   retaken more than 3,000 square kilometers   of territory since September 6, according to a report from the U.S.-based Institute for the Study of War (ISW) on Saturday.

Russia's Defense Ministry announced on Saturday that it was pulling back troops from the Balakliya and Izyum areas but said those troops would be sent to the Donbas region of eastern Ukraine, where two separatist regions have been declared sovereign by Russia, "in order to achieve the stated goals of the special military operation to liberate Donbas."

Ukrainian President   Volodymyr Zelensky   commended the Ukrainian military in a video message shared on the Telegram platform on Saturday night.

Zelensky also taunted Russia for withdrawing troops, saying the Russian army was doing what it does best by "showing its back."

"In the end, it is a good choice for them to run away. There is and will be no place for the occupiers in Ukraine," he said.

On Sunday, Zelensky shared a video of Ukrainian soldiers hoisting the national flag over Chkalovske, another town reclaimed from the Russians in the counteroffensive.

"We will expel the occupiers from every Ukrainian town and village," Zelensky wrote. "Thanks to all our heroes!"

Freshman Principal
3.1  Drinker of the Wry  replied to  JohnRussell @3    2 weeks ago

Good news, a real indicator that this new Ukrainian counter-offensive is working.

Some of our weapons manufacturers need to gear up for the increased requests that the Pentagon will start seeing from neighboring countries.

If Trump had been reelected, it's doubtful Putin would have started this special military operation.

If Trump were in prison like he belongs it is doubtful you would have brought him up on this seed.