Giorgia Meloni May Lead Italy, and Europe Is Worried - The New York Times 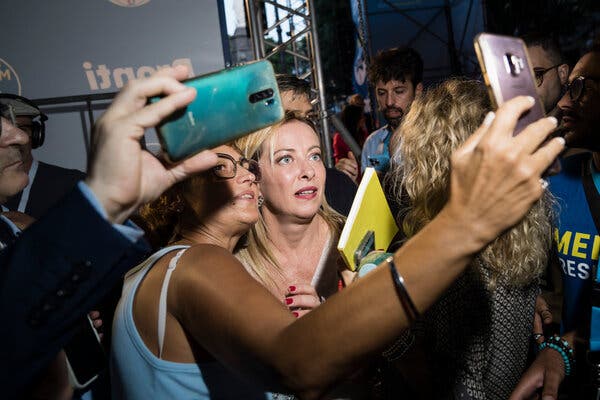 Giorgia Meloni, center, who would be the first woman to lead Italy, posed for a photograph with a supporter in Cagliari, Sardinia, this

CAGLIARI, Sardinia — Giorgia Meloni, the hard-right leader of a party descended from post-Fascist roots and the favorite to become Italy's next prime minister after elections this month, is known for her rhetorical crescendos, thundering timbre and ferocious speeches slamming gay-rights lobbies, European bureaucrats and illegal migrants.

But she was suddenly soft-spoken when asked on a recent evening if she agreed, all caveats aside, with the historical consensus that the Fascist leader Benito Mussolini — whom she admired in her youth as a "good politician" — had been evil and bad for Italy.

"Yeah," she said, almost inaudibly, between sips of an Aperol Spritz and drags on a thin cigarette during an interview in Sardinia, where she had completed another high-decibel political rally.

That simple syllable spoke volumes about Ms. Meloni's campaign to reassure a global audience as she appears poised to become the first politician with a post-Fascist lineage to run Italy since the end of World War II.

Such a feat seemed unimaginable not so long ago, and to pull it off, Ms. Meloni — who would also make history as the first woman to lead Italy — is balancing on a high-stakes wire, persuading her hard-right base of "patriots" that she hasn't changed, while seeking to convince international skeptics that she's no extremist, that the past is past, not prologue, and that Italy's mostly moderate voters trust her, so they should, too.

On Sept. 25, Italians will vote in national elections for the first time since 2018. In those years, three governments of wildly different political complexions came and went, the last a broad national unity government led by Mario Draghi, a technocrat who was the personification of pro-European stability.

Ms. Meloni led the only major party, the Brothers of Italy, to stay outside that unity government, allowing her to vacuum up the opposition vote. Her support in polls steadily expanded from 4 percent in 2018 to 25 percent in a country where even moderate voters have grown numb to Fascist-Communist name calling, but remain enthusiastic about new, and potentially providential, leaders.

Ms. Meloni said her skyrocketing popularity did not mean the country had "moved to the extremes," but that it had simply grown more comfortable with her and confident in her viability, even as she has tried to reposition herself closer to the European mainstream.

Ms. Meloni, whose campaign slogan is "Ready," has become a staunch supporter of NATO and Ukraine, and says she backs the European Union and the euro.

Global markets and the European establishment remain wary. "I fear the social and moral agenda of the right wing," Frans Timmermans, the European Commission's vice president, said recently about the threat Ms. Meloni's coalition posed to E.U. values. As recently as last month, she called for a naval blockade against migrants. She has depicted the European Union as an accomplice to "the project of ethnic replacement of Europe's citizens desired by the great capitals and international speculators."

She has in the past characterized the euro as the "wrong currency" and gushed with support for Viktor Orban of Hungary, Marine Le Pen of France and the illiberal democracies in Eastern Europe. She excoriated "Brussels bureaucrats" and "emissaries" of George Soros, a favorite boogeyman of the nationalist right and conspiracy theorists depicting a world run by Jewish internationalist financiers.

There remains concern that, once in power, Ms. Meloni would toss off her pro-European sheep's wool and reveal her nationalist fangs — reverting to protectionism, caving in to her Putin-adoring coalition partners, rolling back gay rights and eroding liberal E.U. norms.

ImageMs. Meloni called for a naval blockade against migrants as recently as last month.Credit...Gianni Cipriano for The New York Times

International investors and global leaders are wrong to be "afraid," said Ms. Meloni, who is as affable and easygoing in private as she is vitriolic in public. Even in the midst of a heated campaign, she refused to take the bait from a desperate leader of the divided Italian left, who sounded "the alarm for Italian democracy."

"They'll accuse me of being a Fascist my whole life," Ms. Meloni said. "But I don't care because in any case the Italians don't believe anymore in this garbage."

She is delivering rations of red meat to her base (mass immigration is "an instrument in the hands of big great powers" to weaken workers, she growled in Cagliari) and is trying to mend fractures with the other right-wing leaders she is running with in a coalition.

Her chief ally, Matteo Salvini, became the darling of the hard right in 2018 when he pivoted his once-secessionist northern-based League party into a nationalist force. But Ms. Meloni said those hard-right voters "came back home, because I am of that culture, so no one can do it better than I can."

Even so,Mr. Salvini is already creating problems for Ms. Meloni by urging a reconsideration of sanctions against Russia.

Ms. Meloni acknowledged that her other coalition partner, Silvio Berlusconi, the former prime minister who famously named a bed after President Vladimir V. Putin of Russia, had put her "in difficulty as a woman" during his Bunga Bunga sex scandals with young women, when she was herself a young woman in his government.

Neither of her partners, she suspects, wants a woman in charge.

ImageMs. Meloni suspects that her coalition partners don't want a woman in charge.Credit...Gianni Cipriano for The New York Times

But when it comes to being a woman in politics, Ms. Meloni has leaned in. Her veneer of Roman-accented authenticity and her escalating and incensed style have become a part of the Italian political, and pop, landscape.

In 2019, her hard-line defense of the traditional family, and against L.G.B.T.Q. marriage and adoption — while herself being an unwed mother — prompted D.J.s to mockingly put one of her furious refrains, "I am Giorgia, I am a woman, I am a mother, I am Italian, I am Christian," to a beat. It went viral. Ms. Meloni used it as a calling card. She titled her best-selling book "I am Giorgia."

Ms. Meloni grew up without her father, who when she was a toddler set sail for the Canary Islands, where she learned Spanish on summer visits. After a fire that she and her older sister accidentally started, her mother, who at one point wrote romance novels to make ends meet, moved the family into the working class and left-leaning Garbatella neighborhood of Rome.

Ms. Meloni was overweight and introverted, but as a 15-year-old fan of fantasy books (and Michael Jackson, from whom she said she learned her good English) found what she has called a second family in the hard-right Youth Front of the post-Fascist Italian Social Movement.

She considered herself a soldier in Rome's perpetual, often violent and sometimes fatal ideological wars between Communist and post-Fascist extremists, where everything from soccer games to high schools was politicized. Her party leader went to Israel to renounce the crimes of Fascism at the same time as she was rising quickly, later becoming the republic's youngest-ever minister.

But as populism swept Italy in the last decade, Ms. Meloni adopted harsher tones and created the hard right's latest iteration, the Brothers of Italy. She said she resented its members' being depicted as "nostalgic imbeciles," because she had worked hard to purge Fascists and build a new history.

Like Mr. Salvini, she turned her social media accounts into populist pasta on the wall as she desperately sought traction. In the town of Vinci she accused the French of trying to claim Leonardo da Vinci as one of their own. She went to a grappa distillery to call the president then of the E.U., Jean-Claude Juncker, a drunk.She warned about an "empire" of "invaders" consisting of President Emmanuel Macron of France, Angela Merkel of Germany, Mr. Soros and Wall Street.

At her annual political conference in 2018, she hosted Stephen K. Bannon and said that she supported his effort "to build a network that goes beyond the European borders," and that "I look with interest at the phenomenon of Donald Trump" and at the "phenomenon of Putin in Russia." She added, "And so the bigger the network gets, the happier I am."

But on the threshold of running Italy, Ms. Meloni has pivoted. After years of fawning over Ms. Le Pen, she is suddenly distancing herself. ("I haven't got relations with her," she said.) Same for Mr. Orban. ("I didn't agree with some positions he had about Ukrainian war.") She now calls Mr. Putin an anti-Western aggressor and said she would "totally" continue to send offensive arms to Ukraine.

But critics say she revealed her true self during a recent speech at a conference supporting Spain's hard-right Vox party. "There is no possible mediation. Yes to the natural family. No to the L.G.B.T. lobbies," she bellowed in Spanish. "No to the violence of Islam, yes to safer borders, no to mass immigration, yes to work for our people. No to major international finance."

ImageA supporter of the Brothers of Italy in Cagliari.Credit...Gianni Cipriano for The New York Times

"The tone, that was very wrong," she said in the interview. "But it happens to me when I'm very tired," she said, adding that her passionate delivery "becomes hysteric."

There are things she won't give up on, including the tricolor flame she inherited as her party symbol. Many historians say it evokes the flickers over the tomb of Mussolini.

The flame, she has said, has "nothing to do with fascism but is a recognition of the journey made by the democratic right in our Republican history."

"Don't extinguish the flame, Giorgia," a supporter shouted as Ms. Meloni commanded the stage in Cagliari, where she reserved her sharpest invective for leftist attacks that she said tried to depict her as "a monster."

Italians are really good at marketing grossly overpriced luxury good and a lifestyle which they cannot afford. This is making them mad...

I recall someone who tried that and ended up swinging at a gas station.

Perhaps they'll join Hungry as another non-democratic country in Europe.