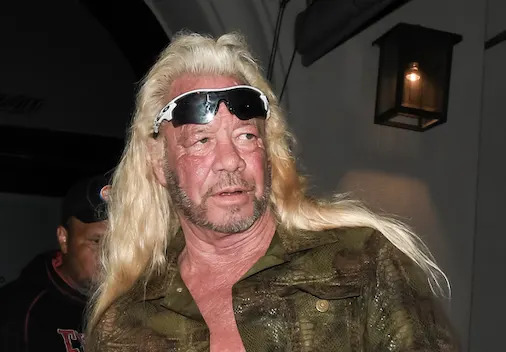 At the Christian evangelical “Opening the Heavens” conference over the weekend, peripatetic reality TV star Duane “Dog the Bounty Hunter” Chapman — whose most recent showwas canceled before it ever aireddue to new allegations of racist and homophobic comments — offered attendees his political assessment of the2020 electionas well as a strident prediction for the November midterms.

The conference bills itself as a “multi-day event where the prophetic heart of God and the manifestation of His supernatural power are demonstrated to those in attendance.”

Allegedly in that spirit Chapman said he asked God, “Why did you let that freak steal the election?”

He said he got his answer inthe parableof Jesus healing a blind man to manifest the power of God. Chapman then related the Biblical story to the 2020 election and the midterms.

“Yeah, he stoled [sic.] it — little Hitler — because now we are going to show you God’s manifestation.”

After a costume change, the frequent Fox News guest appeared again onstage to flesh out his prophecy.

“Wait ’til November,” he told the audience, “the Republicans are going to wipe them out.”

Chapman then went on to repeat therepeatedly disprovenidea that ballot boxes had been stuffed in the 2020 election. The reality tv star followed it up with a ratherun-Christlikethought about the man he called “little Hitler.”

“Hitler committed suicide. And do you know why? Because he was caught And you know what’s going to happen? They’re going to catch these cheaters. And I’m not saying with my tongue or my mouth that he’s going to commit suicide — but you never know.”

It’s not the first time that Chapman has used or been accused of using extreme language to characterize those of whom he disapproves. Beyond the conflict over his most recent show and allegations from his daughter Bonnie last year that he used epithets, the bounty hunter was suspended for months from his popular A&E show in 2012 after a tape of a private phone conversation with his son surfaced where he used the N-word repeatedly. Last year, Chapmanexplainedhis logic and mindset to Entertainment Tonight .

“I have never been a racist,” the reality TV star said, mentioning his own Native American heritage. He then got into specifics.

“I thought I had a pass in the Black tribe to use [the N-word], kind of like Eminem,” Chapman said.

“I had just gotten out of prison in 1979 after spending 18 months in Texas and it was probably three quarters from the Black tribe. So that was a word that we used back-and-forth as maybe a compliment.”

He continued, “My pass expired for using it but no one told me that. To say a racist name doesn’t qualify to make you a racist.”

When ET host Kevin Fazier, who is Black, countered that using the word is indeed a racist act, Chapman answered, “I have more Black friends than Eminem.”

That defense, of course,has been exposedby the New York Times andmanyothersas “shorthand for weak denials of bigotry” and/or “cover for racist statements or actions.”

So this freak is calling President Biden a freak.  This guy is yet another freak to join the freak show that is today's gop/gqp.

He's either a drug addict or should be.

Professor Principal
2.1  Sparty On  replied to  JohnRussell @2    one week ago

Professor Principal
3  devangelical    one week ago

PhD Guide
4  Jeremy Retired in NC    one week ago

This is hilarious.  People getting their panties in a wad because somebody talked bad about Biden and responding by name calling.

You can't make this shit up.

Professor Principal
4.1  Sparty On  replied to  Jeremy Retired in NC @4    one week ago

The triggered can be entertaining.

Not every one can take a brave, thoughtful and independent, position like you do everyday.

It appears the only folks who get their panties in a wad are those who defend the trumpturd.  Can't malign their steaming pile of shit hero!