Taylor Swift Bigger Than All The Rest Of Humanity ! 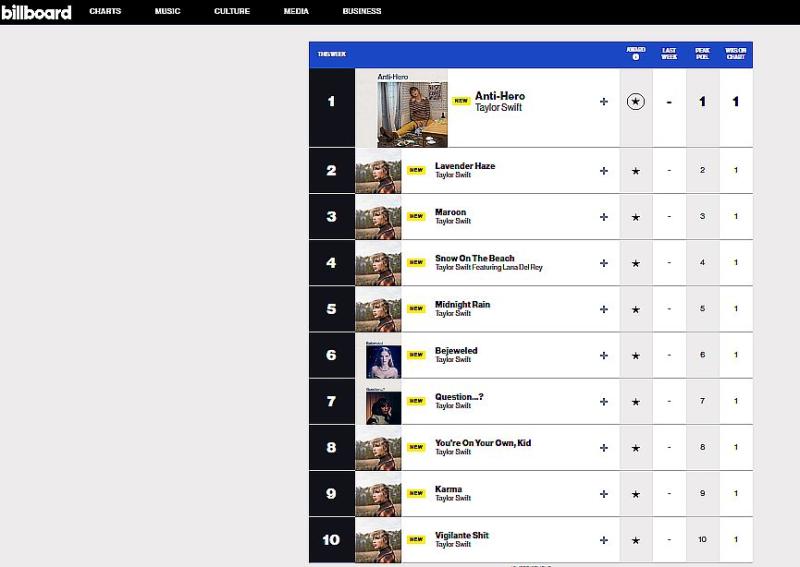 For the first time EVER ! (we're talking ever here people), the same artist holds the top ten spots in this weeks Billboard Hot 100 survey of the most popular current songs.

Bow before her you peasants !

Taylor has announced how deserving , er I mean grateful , she is for this "incredible honor".  In celebration of this great personal achievement she has declared that tickets for her upcoming US tour will start at $395 each instead of the $425 each that had been originally planned.

I can remember, vaguely that the Top 40 used to be based or record sales, jukebox play, and radio station requests. That may still be the case, but in the digital era its not the same thing. Such measures can be easily manipulated by fanatic fan bases.

What Does It Take (To Win Your Love)
Jr. Walker & The All Stars
-

Baby, I Love You
Andy Kim

The Ballad Of John And Yoko
The Beatles

Professor Principal
1.2  Sparty On  replied to  JohnRussell @1    4 weeks ago

And she can't even sing worth a shyt.

And she can't even sing worth a shyt.

I'm not a fan, but I'm thinking a billion other people around the world would argue with you.

I've tried to listen, a little,  to Taylor Swift just because she is so popular. Whats it all about?

I have not been impressed so far. She is evidently considered to be a great modern songwriter of pop music, but she's no Carole King or Barry Mann.

I agree, I never got it either.

Must be a Gen Z thing.

Whats it all about?

You're talking to the wrong person. I am definitely not a TS fan.

No, she's worth more than those two put together.

No, she's worth more than those two put together.

What are we supposed to enjoy, listening to her count her money?

Carole King is considered to be one of the greatest songwriters of the 20th century. Do you envision such an honor for Taylor Swift?

Taylor Swift has never written a song as good as this one, and it wasnt even that big of a hit.

number one song this week

I am a 74 soon to be 75 year old Swiftie.  Ms. Swift is multi-talented and will expand her career far beyond music.  She is smart, savvy and possibly the most beautiful woman of all time.

The above paragraph is my opinion.  You can have your opinion and I will have mine.