"As everyone knows, democracy is when Democrats hold unlimited power, and today that sacred foundation of our country is under attack from free speech," said Mayorkas from a massive television screen being played in the town square before an assembly of glassy-eyed citizens in identical grey jumpsuits. "We will not tire of protecting our country from violent threats such as speech, opinions, people saying stuff, and bad inward thoughts that poison the mind against your benevolent overlords. I love democracy!"

Democracy experts warn that democracy is under threat like never before as millions are being allowed to say whatever they want to each other without trusted fact-checkers supervising their every word. Said experts are recommending greater powers be given to the Department of Homeland Security to address this growing threat.

At publishing time, the DHS had coordinated with Facebook to remove a meme that reminds people of how Mayorkas looks somewhat like a large pink toad. 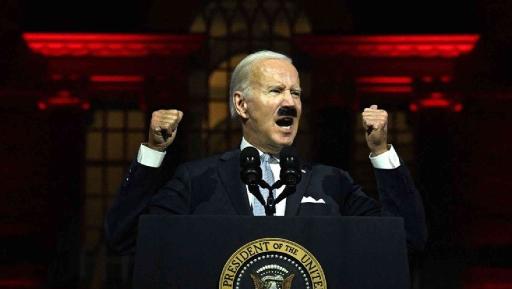 Sadly, while this is total bullshit supposed 'satire' many on the right believe this shit. They gobble up conspiracy theories and completely fabricated satirical quotes as their 'God's honest truth'.

Of course, the closest we ever actually came to canceling an election was when thousands of shit-for-brains MAGA maniacs violently attacked our capital and capital police in attempt to stop the certification of our election and install their deplorable despot into power.

The reality is there are a lot of bitter violent raging morons who want to share their whacko beliefs and conspiracy theories while hurling racist insults and bullshit claims of victimhood on social media platforms. We saw one of them this last weekend violently assault the husband of the House Speaker because of these insane conspiracy theories and violent rhetoric, yet all conservatives can do is pretend that they're somehow being silenced. They aren't being silenced, their worthless opinions and sick ideology are simply being fact checked and rejected by the majority. These bitter bigots still get plenty of airtime on right wing media, everyone has heard their impotent rage, everyone knows rightwing conservatives are gnashing their teeth, angered that the majority of society does not accept their lies and deceit.

Professor Participates
2.1.1  Sunshine  replied to  Dismayed Patriot @2.1    one month ago

You always have the best rants.

Professor Principal
2.2  JohnRussell  replied to  Sean Treacy @2    one month ago

Next will be stealing elections to end democracy

Like doing away with the electoral college; putting the federal government in charge of all elections; making districts by populations instead of the amount of legally registered voters in them; granting immigrants the right to vote; granting criminals the right to vote; funding commercials and advertisement in Republican primaries so the most radical candidates (who Democrats claim are a threat to Democracy) win; etc.

Then I agree whole heartedly; Democrats are trying to steal elections to end Democracy.

All those poor Venezuelans that made the trip merely to prolong their suffering......

Free speech is the foundation all free societies are built on. This false narrative that hate speech must be suppressed is merely a way to silence debate from the mindless thought hive.

Most troubling is the use of government to accomplish this for petty political victories. The danger is that one day the party using such nefarious tools will be on the receiving end of such malicious abuse.

Do not forgive them because they haven't just lost their way. They chose this path with purpose and they more than deserve to be ostracized for their misdeeds.

Not sure why this is first out as satire.  There was an article recently in the Intercept while DHS had shut down the  “Disinformation Governance Board” they were still working behind the scenes with media companies to control online content.

Behind closed doors, and through pressure on private platforms, the U.S. government has used its power to try to shape online discourse. According to meeting minutes and other records appended to a lawsuit filed by Missouri Attorney General Eric Schmitt, a Republican who is also running for Senate, discussions have ranged from the scale and scope of government intervention in online discourse to the mechanics of streamlining takedown requests for false or intentionally misleading information.

“Platforms have got to get comfortable with gov’t. It’s really interesting how hesitant they remain,” Microsoft executive Matt Masterson, a former DHS official, texted Jen Easterly, a DHS director, in February.

In a March meeting , Laura Dehmlow, an FBI official, warned that the threat of subversive information on social media could undermine support for the U.S. government. Dehmlow, according to notes of the discussion attended by senior executives from Twitter and JPMorgan Chase, stressed that “we need a media infrastructure that is held accountable.”

“We do not coordinate with other entities when making content moderation decisions, and we independently evaluate content in line with the Twitter Rules,” a spokesperson for Twitter wrote in a statement to The Intercept.

There is also a formalized process for government officials to directly flag content on Facebook or Instagram and request that it be throttled or suppressed through a special Facebook portal that requires a government or law enforcement email to use. At the time of writing, the “content request system” at facebook.com/xtakedowns/login is still live. DHS and Meta, the parent company of Facebook, did not respond to a request for comment. The FBI declined to comment.

I'm not a constitutional lawyer but isn't this a solid example of an attack on the First Amendment?

a constitutional lawyer but isn't this a solid example of an attack on the First Amendment?

It's an interesting point. Twitter and other social media companies got around the first amendment and censored political speech on the basis they were private companies and no government action was involved. Now it turns out they were coordinating their censorship with the government, which would seem to make the censorship much more likely to be viewed as government action. Interesting to see how it plays out.

“We do not coordinate with other entities when making content moderation decisions, and we independently evaluate content in line with the Twitter Rules,” a spokesperson for Twitter wrote in a statement to The Intercept.

In all seriousness we have two political parties (or silos) that are a little too interested in silencing the other side.

Yes, the left is trying to indoctrinate children and to strategically plant DEI consultants in most of our institutions in order to refashion society in accordance with their utopian vision of a just society. (Equally diverse at every economic level but still with unchecked billionaire wealth.) The left is definitely invested in cancel culture, despite their constant threats to de-platform anyone who even says there is any such thing as cancel culture.

For all the complaining on the right about cancel culture, the right is heavily invested in cancel culture as well. Lefties in academia and the school system who say the quiet part out loud provide an an abundant supply of heads for pikes.

Even more disturbing than the culture war stuff of seeing which anti-free-speech cabal will prevail, we have the obvious attempts to circumvent democracy. Half the country seems to be ok with the violent Jan 6 coup attempt last time around.

The Republicans are practically fighting on the terrain of destroying democracy without any competition from the left. They attempted to storm the Capitol on Jan 6, and next time around they will simply have enough elected and appointed officials in place to throw out election results they don't like.

The Democrats, somewhat naively, believe that as long as elections are fair they will win most of them. It's political malpractice the way the Democrats continually forget the things they do that make many people hate them. FGS, learn to soft pedal some of the agenda, already.

But have the Democrats done their part in undermining democracy?

They do it the old fashioned way: The candidate you think you are voting for bears little resemblance to official you actually wound up electing. (Usually on the economic justice and plutocracy stuff.)

This kind of sucks, too. But sometimes you are able to confront a Democratic politician with their campaign promises and embarrass them into taking action on them.