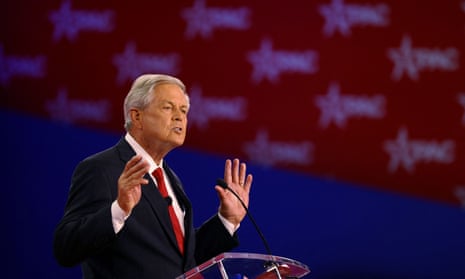 A Republican who urged the Trump White House to declare martial law to stop Joe Biden taking office has only one regret: that he misspelled "martial".

The text from Ralph Norman of South Carolina to Mark Meadows, Donald Trump's final chief of staff, was given to the January 6 committee by Meadows and revealed by Talking Points Memo.

On 17 January 2021, 11 days after the deadly Capitol attack and three days before Biden's inauguration, Norman wrote: "Mark, in seeing what's happening so quickly, and reading about the Dominion law suits attempting to stop any meaningful investigation we are at a point of no return in saving our Republic !! Our LAST HOPE is invoking Marshall Law!! PLEASE URGE TO PRESIDENT TO DO SO!!"

No response from Meadows was revealed.

On Tuesday, a HuffPost reporter asked Norman about the message.

He added: "I was very frustrated then, I'm frustrated now. I was frustrated then by what was going on in the Capitol. President Biden was in his basement the whole year. Dominion was raising all kinda questions."

The reference to Biden's basement was to the then Democratic candidate's decision largely to stay off the campaign trail in 2020, the year of the Covid pandemic.

Dominion Voting Systems has filed major lawsuits, notably against Fox News, regarding claims its machines were involved in voter fraud.

Trump insists his defeat by Biden - by more than 7m votes and by 306-232 in the electoral college - was the result of electoral fraud. It was not.

Norman was among 147 Republicans in the House and Senate who objected to results in key states even after Trump supporters stormed the Capitol on January 6, a riot now linked to nine deaths.

Trump was impeached for inciting an insurrection, proceedings which were ongoing when Norman texted Meadows.

According to CNN, Marjorie Taylor Greene, the far-right Georgia congresswoman, also texted Meadows on 17 January, writing: "In our private chat with only Members, several are saying the only way to save our Republic is for Trump to call for Marshall law."

This week, Greene said that if she and Steve Bannon, Trump's former strategist, had organised the Capitol riot, "we would have won". She also said rioters "would've been armed".

According to the Congressional Research Service, "crises in public order, both real and potential, often evoke comments concerning a resort to martial law.

"While some ambiguity exists regarding the conditions of a martial law setting, such a prospect, nonetheless, is disturbing to many Americans who cherish their liberties, expect civilian law enforcement to prevail, and support civilian control of military authority."

The CRS also says that since the second world war, "martial law has not been presidentially directed or approved for any area of the United States. Federal troops have been dispatched to domestic locales experiencing unrest or riot, but in these situations the military has remained subordinate to federal civilian management."

Marjorie Taylor Greene: Capitol attack 'would've been armed' if I was in charge Read more

On Tuesday, Norman told HuffPost: "I was frustrated at the time with everything that was happening. It was a private text between a friend and myself, nothing more, nothing less."

On Wednesday, the White House issued a rebuke.

"Plotting against the rule of law and to subvert the will of the people is a disgusting affront to our deepest principles as a country," the deputy press secretary, Andrew Bates, said.

Referring to Trump's slogan, Make America Great Again, Bates added: "We all, regardless of party, need to stand up for mainstream values and the constitution, against dangerous, ultra-Maga conspiracy theories and violent rhetoric."

So he had a brain fart. Big deal!

Or maybe he was thinking of Biden's plan to send the air marshals to help stop the unholy mess at the border.

Calling for martial law is not a brain fart!

So he had a brain fart. Big deal!

I thought that republicans were big into enforcing the Constitution...

Disqualification from Holding Office No person shall be a Senator or Representative in Congress, or elector of President and Vice-President, or hold any office, civil or military, under the United States, or under any State, who, having previously taken an oath, as a member of Congress, or as an officer of the United States, or as a member of any State legislature, or as an executive or judicial officer of any State, to support the Constitution of the United States, shall have engaged in insurrection or rebellion against the same, or given aid or comfort to the enemies thereof. But Congress may by a vote of two-thirds of each House, remove such disability.

If calling for martial law to overturn a federal election doesn't qualify, nothing does.

You almost have to be a clown to be an accepted as a member of the House GOP Conference these days.

You almost have to be a clown to be an accepted as a member of the House GOP Conference these days.