Liver disease caused by excessive alcohol use has surged among young people, especially those between the ages of 25 to 34.

By the time Austin Johnson was 29 his liver had been so damaged by heavy drinking that his doctors feared he would die.

For years, he'd been putting away nearly a full bottle of booze each night to quiet his emotional anguish. Everything in his life revolved around drinking.

"It was normal to me, coming home after work, getting drunk, calling friends up drunk, playing video games drunk," said Johnson, now 33. "It was to the point where I would fall asleep with the bottle in my hand. The pain literally went away when I drank enough."

Then he started to feel sick, and not just from hangovers. He was vomiting profusely and coughing up blood, early symptoms of liver damage. His doctor ran blood tests, and the results were frightening.

"They said, 'How are you still walking? You need to get to an emergency room right now,'" Johnson recalled.

Austin Johnson in August 2019, when his eyes and skin had turned yellow from liver disease caused by years of heavy drinking.Courtesy Austin Johnson

Cirrhosis or severe liver disease used to be something that mostly struck people in middle age, or older. Increasingly, alcohol-related liver disease is killing younger people in the U.S.

Johnson is part of a disturbing trend of 25-to-34-year-old men and women experiencing severe, and sometimes fatal, liver damage related to their drinking. A 2018 study reported that between 2009 and 2016, deaths attributed to alcohol-related cirrhosis — scarring of the organ that can lead to its failure over time — had been consistently rising, with the sharpest increase among those in that age group.

The pandemic made it worse. Between 2017 and 2020, deaths from alcohol-associated liver disease continued to rise, with an acceleration during the the first year of the coronavirus, according to a report published in March 2022 in Clinical Gastroenterology and Hepatology.

Again, there was a sharp rise among young adults, 25 to 34 years old, especially among women.

Death rates rose each year for both genders. While there were still more men dying than women, the annual mortality rate was rising faster in women (37%) than men (29%), according to the report, which pulled data from the Centers for Disease Control and Prevention's National Center for Health Statistics.

There are many potential causes, from economic uncertainty to isolation during the pandemic to underlying trauma, researchers say. Another reason could be that drinks have become more potent and people are "drinking more per unit volume," Dr. Elliot Tapper, a liver disease expert and gastroenterology specialist at the University of Michigan Medical School in Ann Arbor, told NBC News.

A liver damaged by excessive drinking can be treated, but it won't save a patient's life if alcohol is still in the picture. That's why Dr. Jessica Mellinger, a liver specialist, and doctors at the University of Michigan Medical School, where Mellinger is an assistant professor, developed a new type of program that combines immediate medical care for liver disease with mental health and addiction care.

"We're definitely seeing younger and younger patients coming in with what we previously thought was advanced liver disease seen in patients only in their middle age, 50s and 60s," said Mellinger.

Since 2018, Mellinger, and doctors at the Michigan Alcohol Improvement program provide psychiatrists and addiction specialists to patients with liver disease. The clinic's early research suggests this approach succeeds in preventing relapse.

"We showed that health care utilization, how much [patients] got admitted to the hospital, how much they use the emergency room, all decreased" between the six months before the patients came to the program and the six months after, says Dr. Scott Winder, a program psychiatrist and an associate professor at the University of Michigan Medical School.

Austin Johnson with his parents, Philip and Kathy Johnson, in November after his treatment at the University of Michigan.Courtesy Austin Johnson

"We showed that health care utilization, how much [patients] got admitted to the hospital, how much they use the emergency room, all decreased," between the six months before the patients entered the program and the six months after, said Winder.

Addiction experts not associated with the Michigan program say that having a patient seen by a psychiatrist, an addiction specialist and a liver specialist can provide more motivation to patients.

Just telling patients they have serious liver disease and will die if they don't stop drinking is not good enough, said Dr. Henry Kranzler, Benjamin Rush Professor of Psychiatry and director of the Center for Studies of Addiction at the University of Pennsylvania's Perelman School of Medicine.

"There needs to be a real thoughtful and concerted plan," Kranzler said.

For example, the message to quit becomes more powerful when the person "is shown scans of their liver," he said. "It is more motivating because it's more tangible than saying in a vague way, if you will stop things will get better."

Dr. Shreya Sengupta, a gastroenterologist who trained at the University of Michigan, was so convinced of the value of the Michigan team's approach that she started a similar program at the Cleveland Clinic, where she specializes in hepatology and liver transplantation.

"We try to address the abuse disorder and the liver disease at the same time," said Sengupta, a medical director of the Multidisciplinary Alcohol Program at the Digestive Disease & Surgery Institute at the Cleveland Clinic.

Fortunately, for younger patients, if they stop drinking alcohol, there is a much higher chance of complete recovery of liver function, said Tapper.

Johnson has stopped drinking and holds hope for a healthier future. The yellow color in his skin and eyes — a symptom of severe liver disease — has disappeared.

"You're either going to be in the ground or you can do something about it," he said. "They guided me in the right path to take the steps in my recovery."

Johnson is part of a disturbing trend of 25-to-34-year-old men and women experiencing severe, and sometimes fatal, liver damage related to their drinking. A 2018 study reported that between 2009 and 2016, deaths attributed to alcohol-related cirrhosis — scarring of the organ that can lead to its failure over time — had been consistently rising, with the sharpest increase among those in that age group.

Let's change federal laws and legalize the recreational use of cannabis nationwide.

I know Schumer wants to pass it and let's see if the House can do anything.

If McCarthy brings it to a vote, it will pass in the House too. 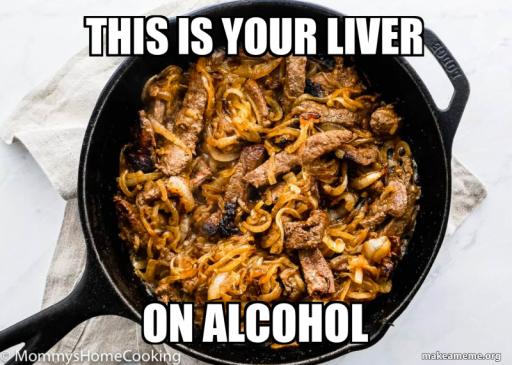