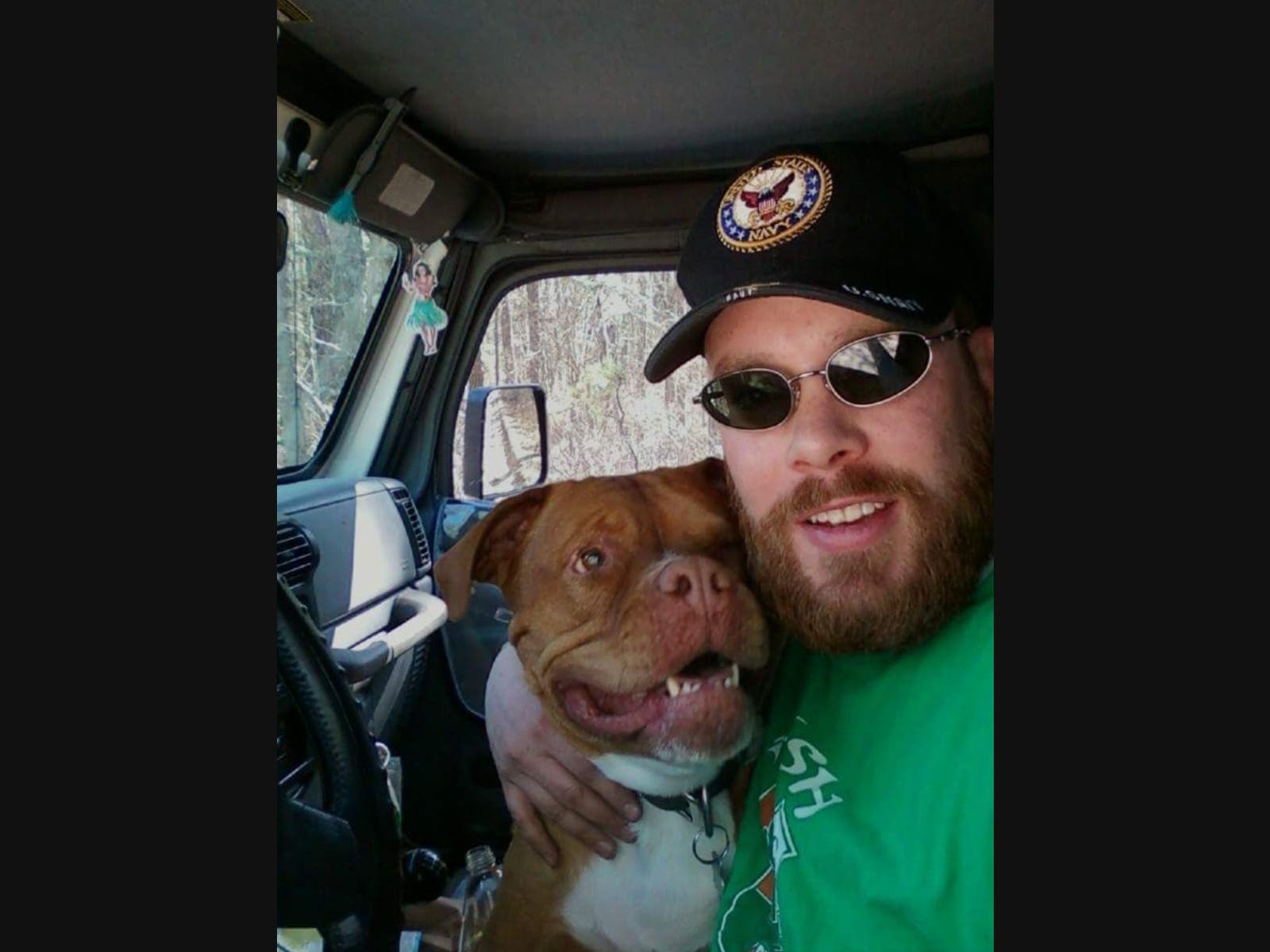 QUEENS, NY — In May 2016, Richard Osthoff was living in a tent in an abandoned chicken coop on the side of Route 9 in Howell, New Jersey, with his beloved service dog Sapphire. A veteran's charity gave the pit mix to Osthoff, a disabled veteran who was honorably discharged from the U.S. Navy in 2002, he told Patch.

When Sapphire developed a life-threatening stomach tumor, Osthoff, now 47, learned the surgery would cost $3,000. A veterinary technician took Osthoff aside and told him, "'I know a guy who runs a pet charity who can help you,'" Osthoff recounted.

His name was Anthony Devolder, and his pet charity was called Friends of Pets United, the vet tech told him.

Anthony Devolder is one of the names that Long Island Rep. George Santos used for years before entering politics in 2020. Santos faces multiple criminal investigations after reports surfaced that he fabricated much of his resume during his congressional campaign. Many Democratic and Republican lawmakers on Long Island are calling for him to resign.

Osthoff and another New Jersey veteran, retired police Sgt. Michael Boll, who tried to intervene to help Osthoff in 2016, told Patch that Santos closed the GoFundMe he set up for Sapphire after it raised $3,000 on social media and disappeared.

"He stopped answering my texts and calls," Osthoff said.

Sapphire died Jan. 15, 2017. After being out of work with a broken leg for over a year, Osthoff couldn't afford the dog's euthanasia and cremation, he said.

"I had to panhandle. It was one of the most degrading things I ever had to do," he remembered.

Boll is a retired Marine Corps veteran and Union Township police sergeant involved in veteran outreach. In 2017, he founded the nonprofit NJ Veterans Network. He was an acquaintance of the vet tech, and knew Osthoff through his outreach work — he also shared Sapphire's GoFundMe page — so when he heard what happened, he tried to mediate, he told Patch.

"I contacted [Santos] and told him 'You're messing with a veteran,' and that he needed to give back the money or use it to get Osthoff another dog," he said.

"He was totally uncooperative on the phone."

Santos told Osthoff and Boll that he planned to use the money to help other animals, Osthoff said. Boll told him that he couldn't do that because the money was raised specifically for Osthoff, and his service dog.

On the GoFundMe page Santos set up for Osthoff, he wrote "Dear all, When a veteran reaches out to ask for help, how can you say no [...]." The GoFundMe was later deleted, and an Internet archive website doesn't have a record of it.

After Santos set up the GoFundMe page in early May 2016, he became hard to contact, Osthoff said.

"I only talked to him two or three times on the phone," Osthoff said, guessing that over half of the donations came from people he knew. On June 30, 2016, he posted on Facebook: "We made the goal, and then some."

But Osthoff's excitement changed to confusion, when instead of scheduling the procedure, Santos told him that Osthoff couldn't use the NJ practice, and instead insisted he bring Sapphire to a veterinarian in Queens, New York.

In August, the vet tech drove Osthoff and Sapphire to that veterinary practice in Queens because Santos told him he had "credit" with the practice from regularly using it so often for his charity.

"It was a tiny little hole in the wall place, but looked legitimate. The vet there said they couldn't operate on the tumor," Osthoff said, adding that he was confused because the New Jersey vet didn't express any similar concerns.

After that, Osthoff said Santos became elusive. In November, Osthoff texted him, "I'm starting to feel like I was mined for my family and friends donations."

He had one final phone conversation with Santos, who said that because Osthoff "didn't do things my way," he put the GoFundMe money from Sapphire's fundraiser into the charity to use "for other dogs."

On Nov. 13, 2016, in texts Osthoff showed Patch, he urged Santos to let him take Sapphire to another vet, saying "My dog is going to die because of god knows what."

Santos replied, "Remember it is our credibility that got GoFundme [...] to contribute. We are audited like every 501c3 and we are with the highest standards of integrity."

"Sapphire is not a candidate for this surgery the funds are moved to the next animal in need and we will make sure we use of resources [sic] to keep her comfortable!"

Santos said in a text message he would take Sapphire for an ultrasound, but Osthoff couldn't come, and it couldn't be done at the New Jersey office recommended by the Howell veterinarian because they wouldn't accept his organization's funding method. Osthoff doesn't know exactly what funding method Santos was referring to.

"And your [sic] not coming for the ride FOPU will handle this from now on only with the animal! We do not drive people around nor do we give them rides we transports animals in need not needy owners," Santos texted Osthoff.

In December, The New York Times reported that the charity was not a registered nonprofit.

After that conversation, "he wouldn't pick up the phone," Osthoff said, and the GoFundMe was gone. He tried to reach out to GoFundMe, but didn't get a response, he said.

"I told Rich to go to the police, but we had limited information [about Santos]," he said.

Osthoff told Patch he was preoccupied with finding a place to live at the time, and planned to involve the police or hire an attorney after he found a home, but "as time went on, I guess I stopped thinking about it."

Boll said that "luckily [Osthoff] was able to get a new service dog right away."

The vet tech didn't reply to a request for comment. Emails to Santos and his attorney about Osthoff's claims were not returned.

The full details of the charity's activities are not known. Santos created a Facebook group for the charity around 2015, where group members shared images of dogs who needed foster homes or donations. The Facebook group was archived around 2020, according to Barbara Hurdas, who met Santos when she worked with him at a Dish Network call center in Queens in 2011, and remembered him starting FOPU and sharing it on social media after he left Dish in 2012. Facebook groups cannot be deleted, but an archived group becomes inaccessible to anyone besides its members, and Hurdas reported that the name of the group was changed to "The End."

When Osthoff and Boll saw Santos on television in December 2022 after the scandal around his admitted resume fabrications broke, they called each other, shocked to see the Anthony Devolder who took the fundraiser money years ago.

"He has PTSD, and this dog is his lifeline. When I first heard about it, I thought, this is going to kill him."

Osthoff told Patch he was "crying his eyes out remembering Sapphire's last day."

"Little girl never left my side in 10 years. I went through two bouts of seriously considering suicide, but thinking about leaving her without me saved my life. I loved that dog so much, I inhaled her last breaths when I had her euthanized."

What a scumbag! That is not a question. Santos sucks ass...

And this POS is now sitting in congress on two committees.

What? If he is, the republicans really are morons.

He is and they are.

There are protests today trying to get his passport revoked, as he is viewed as a flight risk. He has charges against him both locally and federally.

I saw that on the news and there is another group of citizens that are going to DC to knock on every Republicans office door and telling them they want Santo removed.