How many more will need to die so that the international press, the whole world, cares about what is going on in Iran? 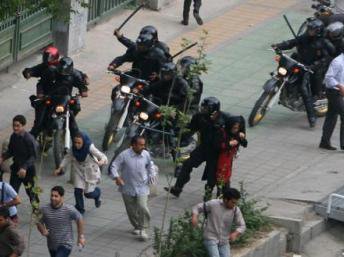 The People’s Mojahedin Organization of Iran (MEK) announced on Saturday that the Iranian regime killed more than 300 protestors in different cities around the country, noting that the number of dead is “much higher and the regime is trying to conceal the scale of its horrific crimes.”

“The bodies of many of the martyrs have been collectively taken from hospitals or their location of martyrdom by the Islamic Revolutionary Guard Corps (IRGC) and other suppressive forces to unknown locations,” the MEK said.


My country is lonely, thousands of young people have been shot in the streets of Iranian cities.
Please be the voices of these people to the world as long as you can. #iranprotest #Internet4Iranِ pic.twitter.com/rsmLCgdFz5
— بوف کر (@deafowl) November 19, 2019

Tehran prisons are reportedly overflowing with detainees and are facing extreme space shortages. The situation is even worse in other cities and prisoners are being held in locations belonging to the IRGC, State Security Forces (SSF) and the government.

Christian Malard, a French journalist and foreign correspondent for France 3, reported that the demonstrations which began as protests against the sharp rise in fuel prices in Iran, have now become a full-blown revolt in response to the carnage against civilians. He cited reports of more than 400 dead in clashes with the regime.


The whole issue is that the Velayat-e Faqih regime is on its last leg. Therefore, supporting the arisen people, the rebellious youths and resistance units is a patriotic duty.   #Iranprotests   #Iran https://t.co/UlkLigQLH3   pic.twitter.com/zaaEosOHdm
— Maryam Rajavi (@Maryam_Rajavi)   November 23, 2019

Maryam Rajavi, wife of the disappeared leader of MEK Massoud Rajavi, who has taken his place as the leader of the Iranian resistance, announced on Saturday the approaching death of Velayat-e Faqih – the Guardianship of the Islamic Jurist, a.k.a. the Twelvers – a theological concept of Islamic sages’ rule which was applied since 1979 in Iran which has since been ruled by a supreme leader and 12 governor clerics.

“The whole issue is that the Velayat-e Faqih regime is on its last leg,” Rajavi tweeted. “Therefore, supporting the arisen people, the rebellious youths and resistance units is a patriotic duty.”

Rajavi described the slaughter of the protesters as a manifest case of crimes against humanity. She urged the United Nations Security Council, governments and the international community to bring about an immediate halt to the killings and suppression and to secure the release of the detainees.

She stressed that the detainees are in danger of being tortured or executed, and so the UN must immediately send investigative and fact-finding missions to Iran.

Rajavi added that the leaders of this regime must face justice for committing crimes against humanity. Silence and inaction vis-à-vis crimes against humanity, she said, are not only a violation of international conventions, laws, and standards but also embolden the mullahs to continue to commit these atrocities against the Iranian people and spread them to the rest of the region.


How many more will need to die so that the international press, the whole world, cares about what is going on in Iran?   #IranProtests   #IranianProtests   #iranprotest   #Internet4Iran   #Iran   pic.twitter.com/L6PIx6vzDW
— Ana (@behnouhs)   November 20, 2019

In an address on Sunday morning, the Supreme Leader Ayatollah Seyed Ali Khamenei warned that “all the evil centers in the world” have mobilized efforts in recent days to encourage unrest in Iran.

Iran’s First Vice President Es’hagh Jahangiri warned that his country would respond resolutely to countries that try to interfere in Iran’s internal affairs.

“After their failure in the economic war, Americans changed their approach and tried to impose pressure on Iran through interference and with help of some other countries,” he said on Saturday in Tehran, and warned: “Some regional states should know that if clues are uncovered about their role in creating unrest in Iran, they will not have good times in the region. If it turns out that others have interfered in Iran’s internal affairs to inflict damage to the Iranian nation, they will surely receive a crushing response.”

The spokesman of the IRGC told Tasnim reported that said the security forces have managed to control about 100 cities involved in the riots, and have been able to arrest the ringleaders of the violent protests.

America is very selective in its hatred and interference into another country's internal affairs.  It spends its time focusing on China (which I assume is to deflect attention from its own problems and inequities), when this cause is so much more extreme and help is so badly needed.

As with another part of Asia I am rooting for the pro democracy resistance in Iran as well. It’s about time the mullahs are overthrown and replaced by a form of democracy either parliamentary or Presidential with congress.

Oh yes, America is SUCH a good example of democracy, with the political division wider and deeper than the Grand Canyon, the increasing antisemitism, the hatreds, the biased media, the gun murders/violence, the widening gap between the rich and the poor, the spotty health care, so of course it should be preached to other nations by interfering in their internal domestic affairs.

As opposed to preferring a repeat of Budapest or Prague for the people of Honk Kong?

I have the distinct feeling that when the Iranian populace has finally had enough and rises up against the oppressive fundamentalist regime they are forced to live under, it is going to probably be bloody in the extreme! Sometimes people can only take so much. The radical mullahs will be the first to go.

But I doubt there will be much outside pressure brought to bear so long as the world still wants the oil.

All good points made above.

The USA is exemplary in the history of the world.

We have a track record of generally orderly non-violent power exchange following each election.

Would that it were so in other areas of the world.

"We have a track record of generally orderly non-violent power exchange following each election."

Yes, generally, except for those few times it's been done by assassination.

And we recently observed/noted the 56th anniversary of the last time that happened.  America is still a noble experiment, a constitutional republic, a representative democracy with the oldest functional constitution on earth, an exceptional capitalist nation, a shining city on a hill, a nation populated by people from every nation on the face of the earth.

When I read your comment, I felt like standing up and saluting.  God bless the United States of America, the home of the brave and land of the free, so ideal that it demands that all other countries of the world emulate its perfection.

Don't worry Buzz Russia and China are Iran's main allies. Both sit on the UN Security Council; so nothing will be done.

Hell, I am not even sure NATO countries will give a shit; considering they just reopened trade with Iran. Trade that takes priority over sanctions for violating the worthless nuclear and missile deals Iran was forced to sign; and has violated repeatedly.

I consider telling the truth to worth a penalty.