Palestinians, Israel and the Coronavirus

Palestinians, Israel and the Coronavirus 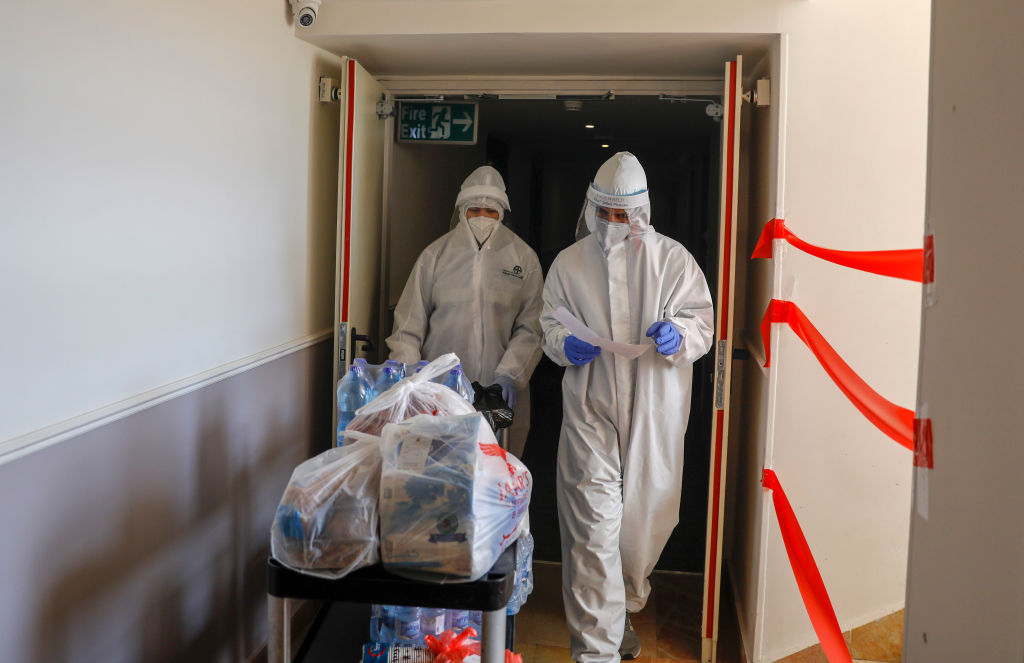 Across Israel, the IDF has established discrete Coronavirus isolation facilities in 21 hotels, tailor-made to specific communities, including strictly kosher for Orthodox Jews and halal for Muslims. Pictured: Volunteers wearing protective outfits deliver food supplies at the Saint George Hotel in Jerusalem, turned into a halal quarantine center for residents returning from abroad, on April 22, 2020. (Photo by Ahmad Gharabli/AFP via Getty Images)

Coronavirus has turned the world upside down. One   Through the Looking Glass   moment was the UN's praise for Israel over "unprecedented cooperation on efforts aimed at containing the epidemic". Those of us who follow the Middle East know that any judgement on Israel apart from outright condemnation is unprecedented for the UN.

What is not unprecedented is cooperation between Arabs and Israelis such as we see today. One hundred years ago, a Jewish microbiologist, Dr Israel Kligler, led the fight to eradicate malaria from this land. For centuries, the territory had been ravaged by the mosquito, decimating the people that tried to live there, leaving it barren and sparsely populated. Shortly before Kligler's war on malaria, British General Edmund Allenby, speaking of his 1917-18 fight against the Ottoman Empire in Palestine, had said: "I am campaigning against mosquitoes". His battle plans against the Turks were shaped above all by the need to overcome the murderous effects of malaria on his own forces.

Like Coronavirus, malaria did not differentiate between Jews and Arabs, and both communities learnt the need to work together against a disease that had for so long caused devastation to both their peoples. Despite violent efforts by Amin al-Husseini, Grand Mufti of Jerusalem, to prevent his people from cooperating with the hated Jews, Kligler's endeavours enabled the land to be cultivated, populated and developed, and eventually to the total elimination of the disease in the area.

Like al-Husseini, some Palestinian Arab leaders today seem to prefer that their own people succumb to disease rather than cooperate with Israel. While Palestinians and Israelis on the ground pull together against Coronavirus, Palestinian Authority (PA) Prime Minister Mohammad Shtayyeh says: "Some soldiers are trying to spread the virus through the door handles of cars. It is a case of racism and hatred by people who hope for the death of the other." More   Alice in Wonderland   fantasy.

A PA spokesman accused the Israeli authorities of "racist and inhumane" behaviour and articles in official PA publications assert that Israel is deliberately spreading the infection and trying to contaminate Palestinian prisoners, using Coronavirus as a biological weapon. Of course, Israel-haters in both mainstream and social media are only too eager to amplify such defamatory and divisive outbursts.

COGAT is also working to coordinate safe transit for Palestinian Arabs from their homes into places of work across the Green Line in Israel. Their earnings put food on the table for tens of thousands of Arab families. Authorities ensure these workers observe the same social distancing as Israeli citizens and are equipped with the same protective equipment. Unprecedented arrangements have been made to allow them to remain in Israel for extended periods to avoid cross-contamination. Despite that, PA leaders maliciously accuse Israel of using their workers, who are so vital to the Palestinian economy, to transmit infections back into Arab areas.

The IDF is closely cooperating with local authorities among Israeli Muslim communities, providing testing and medication and evacuating the sick to hospitals and hotels. Across Israel, they have established discrete isolation facilities in 21 hotels, tailor-made to specific communities, including strictly kosher for Orthodox Jews and halal for Muslims.

The IDF have distributed more than 100,000 food packages to Israeli Muslims in places where there have been significant outbreaks, and are supplying groceries for those who are unable to leave their homes. IDF uniforms inside Muslim villages are often seen among locals as provocative. In places where the Ministry of Health identifies hotspots, deployment of Muslim IDF soldiers and careful messaging and coordination with village leaders have so far helped prevent incidents. In some cases, Muslim civilians carrying out official roles have donned fluorescent vests with IDF Home Front Command markings, something normally unheard of and indicative of understanding the need to pull together.

A recent Coronavirus op-ed in the   Washington Post   demanded that Israel "lift the siege on Gaza". Predictably, the author ignores the fact that Israel's lawful blockade of the Gaza Strip -- also imposed by Egypt -- is in place for one reason only: the regime there remains intent on using Gaza as a base for terrorist attacks against both Israel and Egypt. But even in Gaza, a form of cooperation has been achieved.

"Israel must immediately lift restrictions on supplies and equipment entering Gaza and ensure Palestinian doctors and nurses have the resources they need to ensure the health and safety of their patients."

Israel-haters don't want to know this, but what the author calls for is of course exactly what has been happening since the Coronavirus outbreak.

Israel has continued, as usual, to supply essential aid to the people of Gaza, including electricity and water. COGAT facilitates unhindered all international aid deliveries into the Gaza Strip, including testing equipment, protective garments, disinfectant, medical stocks and other humanitarian supplies provided by WHO, the EU, UNRWA, Qatar, Norway and other countries. Last week alone this included 197 tons of medical supplies among the 2,563 truckloads of goods that crossed from Israel into Gaza.

Despite scaremongering in the   Washington Post   and other papers, the Gaza health authorities report very low levels of Coronavirus, and restaurants re-opened last week. Hamas seems to have been managing the crisis effectively, no doubt anxious to avoid unrest that could destabilise its regime.

The cooperation between Israel and Palestinian Arabs will enable Coronavirus to be contained and perhaps eventually eradicated there. But will it lead to improved long-term relations between the two sides? If history is any guide, the answer is unfortunately no. Despite the extraordinary mutual benefits achieved by cooperation against malaria in the 1920s, which literally enabled life to flourish throughout the land, the obsessive hatred stirred up by Amin al-Husseini and his henchmen prevailed, leading to relentless conflict from that day to this. Despite the insight into Israel's true nature gained by many ordinary Palestinians in this crisis, it looks likely that al-Husseini's modern-day successors will continue to betray their own people as he did, with the same self-destructive animosity and aggression.

Colonel Richard Kemp is a former British Army Commander .   He was also head of the international terrorism team in the U.K. Cabinet Office and is now a writer and speaker on international and military affairs.

Because it is all too familiar.  Hopefully this time it will be different.

It sounds to me like there are handful of people who are being buttheads, but the rest of the article praises the efforts of the Israelis and Palestinians working together to contain the virus and treat the sick

America is grateful to Israel for the millions of doses of HCQ that they donated to their best ally in the world.