Former President Donald Trump was filmed at Mar-a-Lago this week ranting about the unofficial election audit being conducted by Republicans in Arizona, and insisting that they'll be "finding votes" in other states that he lost in the 2020 election. After about a hundred days out of office, Trump no longer commands crowds of tens of […]

THERE IS A VIDEO AT THE SEED LINK

Former President Donald Trump was filmed at Mar-a-Lago this week ranting about the unofficial election audit being conducted by Republicans in Arizona, and insisting that they'll be "finding votes" in other states that he lost in the 2020 election.

After about a hundred days out of office, Trump no longer commands crowds of tens of thousands, like the one he incited into a deadly insurrection on January 6, but that hasn't stopped him from seeking a somewhat smaller spotlight — as seen in a pair of videos posted by TikTok user 45covfefe this week.

In one scene reminiscent of the Kellerman's resort farewell scene in Dirty Dancing, Trump can be seen saying goodbye to guests until the fall as a choir sings in the background.


And in a pair of other videos circulating on social media from the same event, Trump rants from the bandstand — sharing the stage with a guitar player who apparently came back early from his break — about the Arizona audit, and claims several other states bear close watching.

"Watch Arizona, some very interesting things are happening in Arizona, and we just had a great ruling, or actually the Senate, the State Senate of Arizona. Let's see what they find, I wouldn't be surprised if they found thousands and thousands and thousands of votes. So we're going to watch that very close to the end after that we'll watch Pennsylvania and you watch Georgia and you're going to watch Michigan and Wisconsin and you're watching New Hampshire, they found a lot of votes up in New Hampshire, a lot of votes up in New Hampshire just now, you saw that? Because this was a rigged election, everybody knows it and we're going to be watching it very closely but start off by you just take a look, it's on closed circuit I guess it's on all over the place and everyone's talking about yesterday, front page of the New York Times, they didn't want to write it but that's because they thought they were going to have a negative decision and the judge gave us a positive decision," Trump said.

The election was not rigged, and Trump lost it and left office in January.

Watch all three videos above via Covfefe45 and Mystery Solvent.

Trump is moving his Magastan-in-exile to his summer headquarters at his New Jersey golf course, Bedminster, so this little speech was his farewell to Maralago for the season.

People who think Trump is going to dry up and blow away are dreaming. Right now I would say it is more likely than not that the 2024 election will be a repeat of '20, in every way. It's an ongoing tragedy for this country.

Magastain on US All.  Fck that piece of shit that won't flush cheeks from where inout he spits LIES to standing ovaters, known as haters, of reality and such, as go automatically to supporting evidence none able to clutch so shift to more LIES and these guys, and gals, i despise as Fails, they never do not fall, as they bring us all, down.

What a sad state for our country, that can believe Trumpullthinskin, over their own eyes, just, in order to believe lies. This 'man' cannot depart this world expeditiously enough to satisfy the dislikes of me. Cause when the ignorant still refuse to see, it sheds an awful light on this country, and how easily peoples a can and are swayed ,  to a back and forth, that cause spinning

for so many in grave, as engraved in a stone, that rolled out Trump's ear, there is a stick in the mud used to stir the fear, that leave a force centrifugal, from our spinning forefathers and so many more, who gave SO MUCH MORE, as in LIFE AND LIMB, only to watch what/who can only be described as a SIN, a sinistering the pot while minds riot from the rot herd by the lott who've parked on ASS Phault paved by a ney shunning the truth,

it truly is a bloody pool of thought evacuated, all due to one big mouthed floating 'Baby Ruth' !

trump " watch Arizona, I wouldn't be surprised if they find thousands of votes... thousands and thousands"

If not the republicans are wasting their money and I doubt that is their plan.

Yep I don't doubt that the republican oversight will find what they want to find. Proving what they say they found will be a different story though.

If not the republicans are wasting their money and I doubt that is their plan.

Pretty hard not to find what you want with no oversight, and the people looking willing to do anything to find what they're looking for.

Wouldn't shock me either, some of the people counting votes were part of the Jan. 6th insurrection.

I don't think people are donating money for nothing. They will expect something out of this...

Guarantee these hackers are going to claim a bunch of crap just to sow discord in the system.

just to sow discord in the system.

The only silver lining I can see is that it is primarily the right wingers that are losing faith in the system, and so might not bother voting because of that lack of faith.

The unending BS of the ex Liar in Chief.

I can see this dipshit on his death bed and his final words...

I know he is mental yet what is scary is all the little dipshits that believe him.

LOL If it wasn't so life like it wouldn't be so funny.

But he had more people at a rally.  That proves it right there...

The former occupant of the White House seems to think these bogus vote recounts (like in Arizona) are going to lead to his re-instatement in the White House.  He thinks Arizona is the first domino.

You'd have to be a complete and total idiot to believe the last election was fraudulent.

You'd have to be a complete and total idiot to believe the last election was fraudulent.

We seem to be surrounded by 50-million of them.  Coincidentally, these are most likely the same people that were/are having their bank accounts vacuumed out by Trump and the RNC.

Professor Principal
6  Buzz of the Orient    2 weeks ago

It sure is difficult for Biden and his administration to champion American democracy, when the world is watching that ignorant fool-in-chief make a mockery of it.  I'm sure the Chinese government must LOVE what Trump is continuing to do. 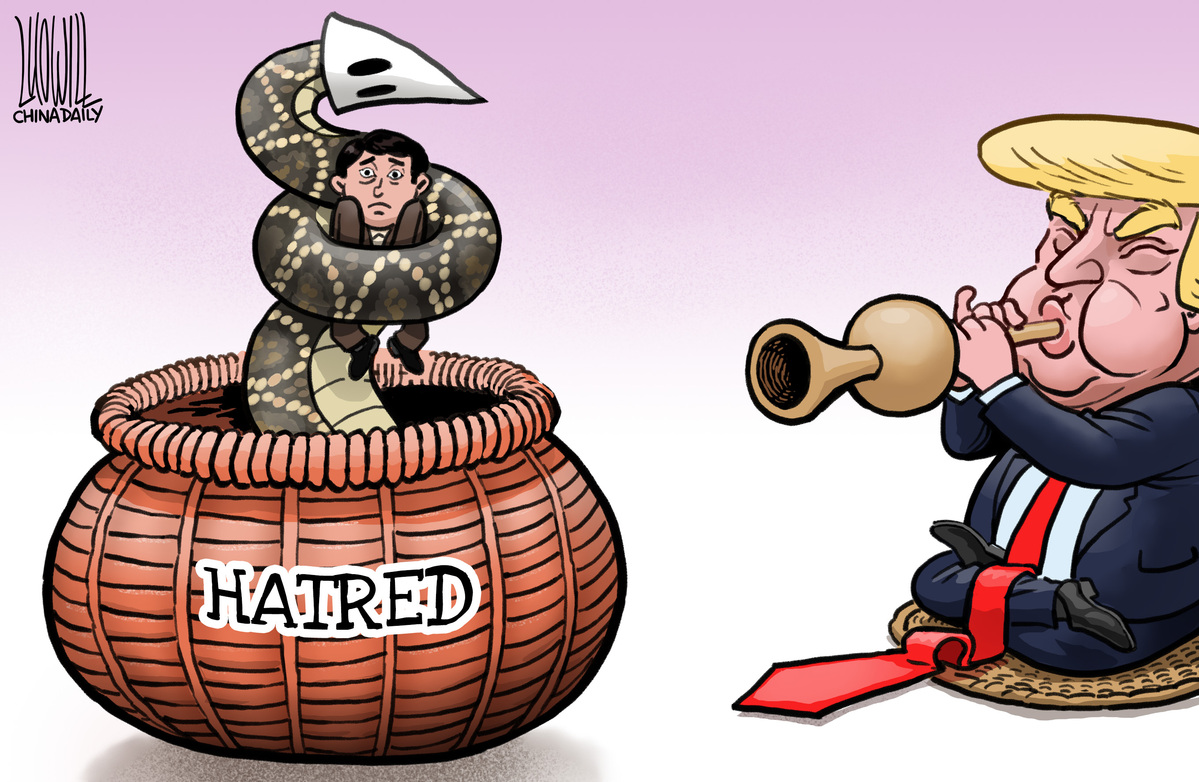