"Looking forward to being in the North Carolina tomorrow night. We’re having a BIG RALLY for a great guy, Dan Bishop," Trump tweeted on Sunday, referring to the Republican nominee, a 55-year-old state senator who has embraced Trump's policies and some of his political tactics.

Tomorrow the voters of North Carolina's 9th Congressional District will finally decide who will represent them in the US House of Representatives. The seat has remained empty since the 116th congress was seated in January. Republican Mark Harris had won the seat in 2018 by a narrow margin, however an investigation was immediately launched involving the devious tactic of "ballot harvesting." That's the scam prone practice of picking up ballot's to allegedly bring them to voters, rather than voters fulfilling their civic duty and actually going out to the polling stations. In this case, illegal ballot tampering was discovered and the North Carolina Board of Elections voted against certifying the election.


To make a long story short, an independent contractor working on behalf of Harris, Leslie McCrae Dowless was arrested & indicted on multiple charges. Election winner Mark Harris then removed himself from the election.  Eventually, a special election was scheduled for Tuesday, September 10th (tomorrow night). The candidates are Republican Dan Bishop and Democrat Dan McCready. The district itself is a combination of suburban and rural areas stretching south and east from the city of Charlotte. Once reliably Republican the district has become more of a toss up, as evidenced by the closeness of the 2018 election results (approx a 900 vote difference). While Bishop's campaign has focused more on national issues, McCready has concentrated more on local concerns.

It was the last election of 2018 and maybe the first election of 2020. Tonight (Monday) President Trump heads to Fayetteville, a city in North Carolina's 9th district to rally voters on the eve of the vote. This election could be an indicator of whether political sentiments are as they were last November, when Democrats ended up flipping 40 House seats and winning control of the House. The President aims to keep the 9th District as MAGA country. In such a close race turnout will be crucial. 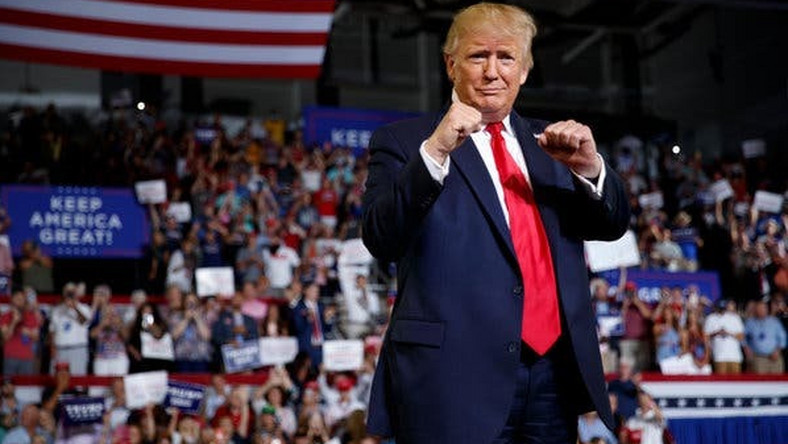 Can the President do it again?

While the outcome of the general special election on September 10 will have no impact on the Democrats’ majority control of the U.S. House of Representatives it will likely be seen as a bellwether indicator of how North Carolina, a key battleground state, will vote in the 2020 presidential election.

Comments that simply call the President names will be deleted

it will likely be seen as a bellwether indicator of how North Carolina, a key battleground state, will vote in the 2020 presidential election.

Well, apparently the GOP is going to disenfranchise its GOP voters by cancelling any GOP primary, so Trump doesn't have to face a challenge. And yes, the DNC does the exact same shit when the incumbent President is a Democrat. The parties have way too much control. If someone in the same party chooses to run against a standing President, the voters should have the chance to vote for that person.

Hope this isn't off topic - it is relevant to how North Carolina will vote in the 2020 presidential election.

Well, apparently the GOP is going to disenfranchise its GOP voters by cancelling any GOP primary, so Trump doesn't have to face a challenge.

A viable candidate would be required. Even the DNC will soon chop off all their candidates with less than 10% support.

A viable candidate would be required.

True, but it's a lot harder to become a viable candidate when everyone knows the state GOP (or DNC - again, this isn't a partisan issue) won't allow a primary to be held no matter what.

If it was a Mitt Romney rather than a William Weld or Mark Sanford the GOP would have a primary. You need legitimate public support to challenge a sitting president. Let me recall the most notable example of something like that happening:

"Though President   Lyndon B. Johnson   had served during two presidential terms, the   22nd Amendment   did not disqualify Johnson from running for another term, because he had only served 14 months following   John F. Kennedy's assassination   before being sworn in for his 'full' term in January 1965. As a result, it was widely assumed when 1968 began that President Johnson would be a Democratic candidate, and that he would have little trouble in winning the Democratic nomination.

Despite the growing opposition to Johnson's policies in Vietnam in both Congress and in the public, no prominent Democratic politician was prepared to run against a sitting President of his own party. Anti-war activists of the new " Dump Johnson movement " initially approached   Senator   Robert F. Kennedy   of   New York , an outspoken critic of Johnson's policies with a large base of support, for a candidacy, but he declined to run."

The   Republican Party   is hitting the panic button and pouring money into a special election in North Carolina’s 9th Congressional District.

Republicans have held the seat since 1963, but four weeks out, this year’s race is a dead heat, according to   GOP   insiders who fear President   Trump ’s party will suffer a major embarrassment if they lose the first test of the 2020 cycle.

The special election is a do-over of last year’s midterm contest in which Republican Mark Harris beat   Mr. McCready   by 905 votes but the results were scratched because of absentee ballot fraud linked to the Harris campaign.

Following the high drama of the election scandal, both sides say voters have tuned out the summer campaigns and extremely low turnout expected for the Sept. 10 special election make the outcome a crapshoot.

Democrats are licking their chops about winning a district   Mr. Trump   carried by 11 points in 2016.

“If   Dan McCready   wins that election, Republicans will be running scared across the country,” said Thomas Mills, a Democratic strategist and commentator in North Carolina.

“Despite the fact that   Dan McCready   has been campaigning for almost three years, the polls are tied and   Dan Bishop   has all the momentum in this race,” he said. “With dozens of events and a solid ground game in place over the next four weeks, we see the district staying Republican.”

Mr. Bishop   gained national prominence as the author of the state’s “bathroom bill” that required people to use the public restrooms corresponding with their biological sex. The 2016 law touched off protests and boycotts of North Carolina before it was repealed a year later as part of a bipartisan deal.

Mr. Bishop   beat nine other Republicans in the May 14 primary. Mr. Harris did not run.

The prospect of extremely low turnout has shaped the race. A veteran state   GOP   operative said the turnout likely will look like a municipal election.

“Low turnout elections are always unique and a lot of it is fought out on the ground. So it is a real slugfest,” the   GOP   operative said.

Eyeing turnout,   Mr. Bishop   is playing strictly to the   GOP   base with a pro- Trump   message. He is promising to fight “crazy liberal clowns” in Washington.

Mr. McCready , a Marine veteran, is running a replay of the midterm race with a focus on health care reform, the same message that helped get enough moderate Democrats elected last year to take control of the House.

He is also avoiding attacks on   Mr. Trump   that could energize his opponent’s supporters.

“This campaign is for the people who bring us together and put country before political party and fight for people again instead of this broken partisan politics,”   Mr. McCready   said at a candidate forum Monday hosted by the NAACP branch in Fayetteville, according to The Charlotte Observer.

Mr. Bishop   did not attend the forum.   Mr. McCready   was joined on stage at the forum by Libertarian Jeff Scott and Green Party candidate Allen Smith, who will be on the ballot next month.

The outside spending by Republican groups has helped make up for   Mr. McCready   out-fundraising   Mr. Bishop   $3.2 million to $1.2 million.

Democratic groups such as Stand Up Republic, an anti- Trump   super PAC, also have been putting money into the race.

The biggest spender behind   Mr. McCready   has been the Environmental Defense Action Fund and its super PAC, EDF Action Votes, spending a combined $586,000, according to a report by Open Secrets.

Democratic committees also are funneling money into a get-out-the-vote effort.

Understood, but tonight the President will give it his personal touch. You know, the man who even survives lightning bolts! 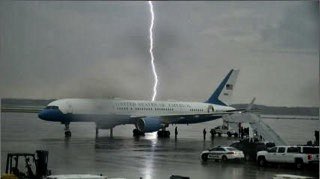 I wonder if either one of these guys has "Vote for Dan!" as a campaign slogan.

And don't forget to give Dan Bishop your vote tomorrow! 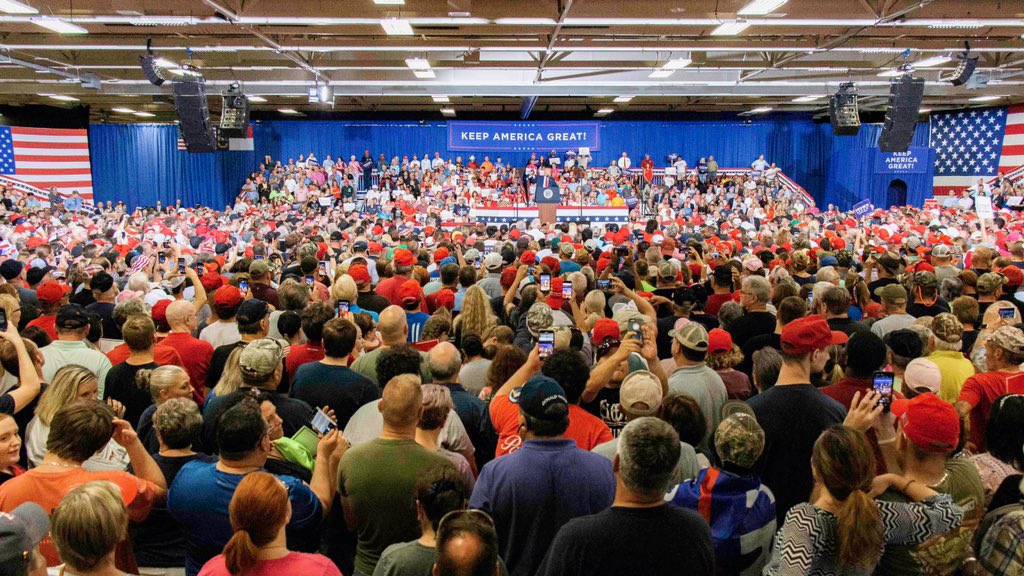