While there’s much to celebrate this week as we recognize the 50th Anniversary of Earth Day, the world made a baseline mistake in developing environmental policy decades ago. It chose to treat nature as an unlimited resource for humans. This baseline allowed policies to fall short. It’s one of the reasons our planet is now superheating. Now, we are making that same mistake — leading to COVID-19, SARS, and the swine flu — with factory farming and other forms of ecocide that degrade the buffer between people and the pre-Anthropocene environment.

Degrading that natural buffer exacerbates every risk, as mentioned above. With global heating, the next pandemic could be hiding in the arctic permafrost. Solving this baseline problem allows us to trace these back to an ultimate source, and perhaps to a solution.

We suggest one stop and two starts this Earth Day. The first step involves the cessation of factory farming and factory deforesting. They’re the source of too many pandemics to allow these activities to continue. The second requires laying down new laws, instituting rights for both animals and nature. It’s the only way to enhance legal protections so that egregious actions, like the ones that led to these health and climate crises, are indictable. The third requires the immediate restoration of what’s been damaged and the all-hands-on-deck conservation of what’s left. A failure to do this and pandemics become part and parcel of daily life.

First and foremost, in the post-peak period of this pandemic and before another virus emerges, it’s time to shut down an industry that is at the core of this problem: the factory farming of animals and the destruction of natural habitat that makes this industry possible. Doing so would save hundreds of thousands of lives and hundreds of billions of dollars.

The parallels here to the fossil fuel industry are striking. Air pollution is responsible for 7 million premature deaths a year, yet governments — and taxpayers — cover the $5.3 trillion tab for subsidizing environmental cleanup, medical response and more. Fossil fuel companies should cover those climate and health-related costs, much like the animal farming industry should cover these pandemic costs, already in the trillions of dollars.

Similarly, the divestment activism that has helped shut down and transition off fossil fuels needs to set its sights on the factory farming industry. Environmentalists may be surprised to see how many of the household names are in their fund portfolios. It’s time to shut down this industry before it breeds another virus that kills hundreds of thousands of Americans. The next one is festering now: The fatal bird flu was recently found on a turkey farm in South Carolina.

Second, as we phase out of animal agribusiness — and the festering factory farms and wet markets rife with the disease — we need to establish new legal protections for animal populations and habitat lest it gets abused and misused again and propagate yet another pandemic.

This debate — how to best protect the animal and natural worlds as a way of protecting human health — is now being fought in federal court. The longer that we fail to institute and implement rights for animals and their habitat, the more likely it is that fossil fuel and the factory farming industries will continue to extract and exploit for profit while punting environmental and health-related cleanup costs to taxpayers and continuing to put the public in harm’s way.

ADVERTISEMENT
Third, once the legal protections are in place to ensure a better baseline for keeping abusers and misusers in check, the work of conservation and restoration becomes critical. Even if we shut down the factory farm and fossil fuel industries today, there’d still be potential for millions of more deaths from air pollution and pandemics. Because habitat has been so badly harmed by these industries and our support for them, extreme weather and the disease will continue to rear their ugly heads, killing millions more, until we actively restore balance.

Our new environmental baseline, then, starting this Earth Day must be that nonhuman habitat, and the homes of sentient species, deserve the right to survive and thrive. That baseline — which goes beyond the shutting down of factory farming and fossil fuel industries and goes beyond the establishment of legal rights for animals and habitat — would be most protective against things like climate change and pandemics. If we, humans, want to survive and thrive, we must also ensure that animals and their habitat survive and thrive. Right now, they’re barely surviving. Biodiversity is declining at unprecedented rates. More than half of the world’s biodiversity is gone. Since 1970, we’ve wiped out 60 percent of the animal population and now one million species are threatened with extinction.

Stopping this precipitous decline is a health emergency. Thankfully, it’s not an impossible lift — and comes with massive health and economic gains. Transitioning off factory farming and factory deforesting — and the propensity for pandemics that these practices propagate — frees up immense resources. Currently, only half of the world’s crop calories are directly feeding humans. That’s not an efficient system. Let’s turn the remaining crops, which currently support industrial animal farming, into plant-based protein instead. We could then conserve most of the world’s crops for plant production for human consumption, end all new destruction of habitat for livestock or feed production and allow the slow but steady restoration of severely damaged habitat.

Big asks for the global community but no better time than Earth Day to double-down on our commitment to protecting it. Ending factory farming and factory deforesting and legally protecting animals and their habitat. Conserving land for plant-protein production primarily and restoring heavily logged lands. Consider our choices, we either pursue this — and fast — or we face another pandemic and shut down our societies, economies, markets and more. The choice seems obvious.

There is a growing speculation that meat packing plants are somehow, a key piece of this puzzle,

the local news just rattled off the names of a dozen meat plants that have been closed across 8 or 9 states.

This article is a week old.

"There is no research to indicate that the coronavirus can spread through food."

I really don't want to think about that.

"There is no research to indicate that the coronavirus can spread through food."

Even though there is no research that confirms food contamination by the Covid-19, I am not so sure I totally agree with that.

If that is the truth, then why all the fuss about shutting down the meat plants other than human infection at the work site.

I'd like to know more about that, so I will have to look into that to see if there is more clarification on that possibility.

You can forget it. I’m not going to stop eating meat. Gimme a break.

I’m for balance and a concern for the environment but there is a whole lot of “loony” in this article.

Nor will I.  And I can guarantee I will NEVER eat Pangolin.

I will NEVER eat Pangolin

Because they are aDORable! 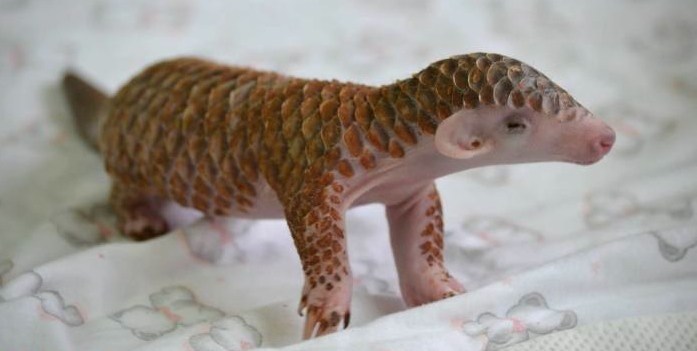