Sergeant Reckless was the only animal ever awarded an official rank in the Marine Corps.

I live in Ocala, Florida the horse capital of the world. In Marion County, there are over 700 horse farms. Ocala International Airport has no commercial flights, it is dedicated to private planes flying in from all over the world to pick up and deliver horses.

In January of 2021 the new ''World Equestrian Center" opened it is the largest most advanced equestrian facility in the world. https://worldequestriancenter.com/ocala-fl/facilities/

One would think that a statue of one of the great racehorses of all time would be the center of this facility, but no, it's a short stout-legged Mongol horse that takes center stage.

This is the story of Sargent Reckless, a Marine's Marine.

Sergeant Reckless was the only animal ever awarded an official rank in the Marine Corps. Author: Christopher Klein

The United States Marine Corps has endured few firefights as savage as the Battle for Outpost Vegas in the waning months of the Korean War. With a roar that sounded like "twenty tornadoes tearing at a countryside," according to one serviceman, more than 500 mortar and artillery rounds per minute deluged the mountaintop ridge where the Recoilless Rifle Platoon of the 5th Marines attempted to repel a Chinese assault on March 27, 1953. So much ordnance howled overhead that radar screens could only display a giant, useless blur and incoming and outgoing shells collided in mid-flight.

As the sky fell on the Marines defending Outpost Vegas—so named because it would be a gamble to hold—they rejoiced as the silhouette of their beloved comrade emerged once again from the shroud of smoke that cloaked their position. All day long, their fellow Marine had traversed the "smoking, death-pocked rubble" to deliver fresh ammunition along with a badly needed boost of morale.

Traveling alone on 51 rounds trips through a no-man's land of rice paddies and scaling a 45-degree incline with bowed head and quivering legs, the solitary figure fought the natural instinct to flee and relied on training and fortitude to deliver nearly 9,000 back-breaking pounds of ammunition from the supply point to the gun teams.

The platoon knew their heroic compatriot was no ordinary Marine—and it wasn't just because she was a horse.

A calming presence amid the chaos erupting around Outpost Vegas, the mighty mare named "Reckless" lugged six rounds, then eight, at a time up the mountain and evacuated wounded Marines back down the slope for medical treatment—even after sustaining two shrapnel wounds that would earn her a pair of Purple Hearts. On one trip, Reckless even donned flak jackets and shielded four Marines up the mountain.

"Horses are flight animals, but Reckless ran toward the danger because she knew the guys needed her," says Robin Hutton, author of Sgt. Reckless: America's War Horse.

One of those guys was Sgt. Harold Wadley, who was astounded at the sight of the riderless horse. "I looked back at the eastern skyline through all the smoke and swinging flare light and could hardly believe my eyes," the Battle of Outpost Vegas veteran recalled at the unveiling of a statue of Reckless at Camp Pendleton in 2016. "Surely an angel must have been riding her."

Although she excelled at the job, Reckless was not bred to be a beast of burden. Born at a Seoul racetrack, the chestnut brown filly originally named "Ah Chim Hai" (meaning "Flame of the Morning") was destined for a racing career until the outbreak of the Korean War in 1950. In need of money to pay for a prosthesis for his sister who lost a leg in a land mind explosion, the horse's owner reluctantly sold his filly for $250 to Lieutenant Eric Pedersen of the Recoilless Rifle Platoon in October 1952.

Pedersen wasn't searching for a mere mascot, however, but a workhorse who could carry 24-pound ammunition shells and other supplies across the rugged, remote terrain of the Korean Peninsula that was inaccessible to trucks. Marines christened their new recruit "Reckless" not for her wild abandon but for the work she would do in resupplying recoilless rifles, known as "reckless rifles" in Marine jargon.

For weeks after the horse's purchase, Technical Sergeant Joe Latham put Reckless through an equine version of boot camp that he dubbed "hoof camp." Latham acclimated the horse to the extreme noise of battle and led her up and down hills to get used to the weight of the ammunition on her back.

"He taught her to step over communication lines and barbed wire," says Hutton. "He yelled, 'Incoming!' and she would run to a bunker and get down. She learned how to lay down in a trench for cover." The horse could find her way to her fellow Marines all by herself and even understand hand signals.

In spite of having the stature of a pony, the racehorse quickly proved an extraordinary war horse. "The Marines became her herd, and she would follow them everywhere. She became one of the guys," Hutton says.

Reckless slept in the Marines' tents and dined with them in the mess hall. Proving that she had an iron stomach that matched her steely determination, Reckless ate bacon, scrambled eggs and coffee for breakfast, and liked to snack on candy bars and Coca-Cola—not to mention hats, blankets and poker chips. "It was crazy what she ate," Hutton says. "She had this wonderful sturdy constitution and disposition."

Reckless wasn't against downing a couple of cold ones with her fellow Marines, either. In fact, on the day after an armistice silenced the guns over Korea, the horse was seen staggering around camp after perhaps having one too many the night before when celebrating with the platoon. (Fittingly, an Illinois brewery now serves a Sgt. Reckless American pale ale.)

So beloved was Reckless that she was promoted to sergeant on April 10, 1954, becoming the only animal ever awarded an official rank in the Marine Corps. Days later a profile of the war horse penned by Lieutenant Colonel Andrew Geer, a talented writer and Hollywood scriptwriter, appeared in the Saturday Evening Post. The piece catapulted Reckless to fame and sparked a campaign for her to return to the United States like her fellow Marines.

When the military balked at the idea for fear it would be seen as a publicity stunt or a waste of money, a friend of Geer's who owned a shipping company arranged for the horse's transportation across the Pacific; the scriptwriter paid $1,200 in shipping expenses out of his own pocket. "He was her champion," Hutton says. "Because of him she got back to America."

Sgt. Reckless arrived in the United States in November 1954 and was stationed at California's Camp Pendleton where she was twice promoted to staff sergeant and bore three colts and a filly. Her death in 1968 was front-page news, and, befitting her rank, Sgt. Reckless was buried with full military honors.

"She was as famous as Lassie and Rin Tin Tin in her day, but she vanished from history," Hutton says. Like many other Korean War veterans, Sgt. Reckless became overshadowed by the events of World War II and the Vietnam War.

Thanks in part to Hutton's book, however, there has been a resurgence of interest in Sgt. Reckless in recent years. Life-sized bronze statues of the horse were unveiled at Virginia's National Museum of the Marine Corps and Heritage Center in 2013 and at Camp Pendleton in 2016, with another planned for Kentucky Horse Park's International Museum of the Horse and now at WEC, Ocala, FL.

It's an honor well-deserved, Hutton says. "She wasn't a horse. She was a Marine."

Photo of Sargent Reckless at the WEC, Ocala Florida. 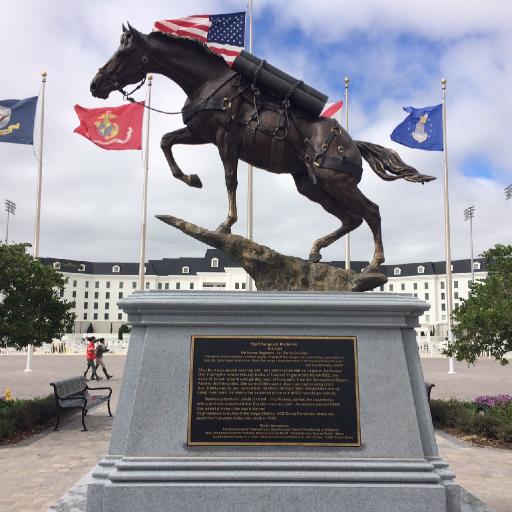 Sargent Reckless was a hero to the Marines that held on at Outpost Vegas.

Staff Sergeant Reckless (1948-1968) is a decorated war horse that served with Fifth Marine Regiment during the Korean War. The Mongolian breed mare was purchased in October 1952 at a racetrack in Seoul, Korea and then trained to be a pack horse for the Recoilless Rifle Platoon, Anti-Tank Company, Fifth Marine Regiment. During the war she transported supplies, ammunition, and evacuated casualties; often without the need for a handler after quickly learning each route. She especially distinguished herself during the Battle for Outpost Vegas in March 1953, following which she was promoted to corporal. In 1954, she was promoted to sergeant following the conclusion of the war and in 1959 promoted to the rank of staff sergeant.

I can see a movie in the works.

What a great story that I never knew and I love horses. Pretty amazing she got a "Purple Heart". Not too many horses can say that, (if any).

Professor Principal
5  Buzz of the Orient    9 months ago

Nobody's going to beat that dead horse - I laughed out loud when I read the paragraph about her diet.