Democrats Should Be Bragging About The Markets

Democrats seem especially reluctant to use the stock market as a measure of their economic prowess. Under Barack Obama, the Dow hit record highs 118 times. Do you remember him ever talking about it?

On March 11, President Joe Biden gave a White House address touting his administration's response to the COVID-19 crisis. As it happened, the Dow Jones Industrial Average closed at another record high the day before. But about that Biden said not a word.

Had Donald Trump still been president, the stock market would have almost certainly topped his list of glorious achievements. We'd hear popping talk about how our 401(k)s are sizzling and how he is the reason. Sample tweet from August 2017: "Stock market at an all-time high. That doesn't just happen!"

No, Biden last week spoke of "a collective suffering, a collective sacrifice, a year filled with the loss of life and the loss of living for all of us." He spent a good deal of time on the anguish, but then he moved, happily, to his administration's successes — boosting production of the Johnson & Johnson vaccine, recruiting armies to give the shots, getting the vaccines into pharmacies.

It was a relief to hear a Democratic president bragging out loud about his accomplishments. But the message must move away from pain to prosperity. Biden has started on that path by touting the massive COVID relief bill that's sending checks to an overwhelmingly supportive public. His self-praise should expand to the stock market.

Democrats seem especially reluctant to use the stock market as a measure of their economic prowess. Under Barack Obama, the Dow hit record highs 118 times. Do you remember him ever talking about it?

Biden was basically right when he said, "Where I come from in Scranton and Claymont, the people don't live off of the stock market."


Many Americans don't understand that reality, as Trump knew well. Those in the middle who own a few shares, perhaps in their retirement accounts, do feel tied to movements in stock prices. Never mind that in 2019, the median portfolio size for households in this group was only $13,000.

Non-investors, meanwhile, often associate a booming stock market with a good economy, even if they themselves are hurting.

It's odd how Democrats shy away from taking credit for bubbling markets, when, in recent decades, stock returns have done better under their presidents than Republican ones, Trump included. The Dow posted an annualized return of almost 11.8 percent under Trump, according to MarketWatch. That was good but short of Obama's 12.1 percent. And it was nowhere near Bill Clinton's 15.9 percent.

As MarketWatch also noted, even Clinton's numbers were blown away by the 25.5 percent annualized rise under Calvin Coolidge, a Republican. Of course, Coolidge had the Roaring '20s blowing wind in his economy's sails.

We're now in the 2020s. Many economists are predicting that with the virus in retreat, the economy will roar once again. The Financial Times cites such prods as pent-up demand, government spending, and savings by the locked-down Americans who kept their jobs but had few places to spend money.

The stock market is off to a hot start in Biden's first year. We won't miss tweets like Trump's "Dow hit a new intraday all-time high! I wonder whether or not the Fake News Media will so report?"

But Democrats would be wise to at least applaud politely when stock markets sing of a new age of abundance now that they're in charge.

This article is very perceptive. Even though the bottom of half of Americans have virtually no gains from the stock market success (thats a lot of people), there is a perception generated by mainstream media that everyone should celebrate the rich getting richer

Thus it would be politically advantageous to some degree for Biden to begin some of his statements with "the stock market is up today", or "a new all time high again". I think it would drive Trump crazier than he already is.

The people are pretty smart, and they know Biden has done nothing to improve the economy or boost the markets. 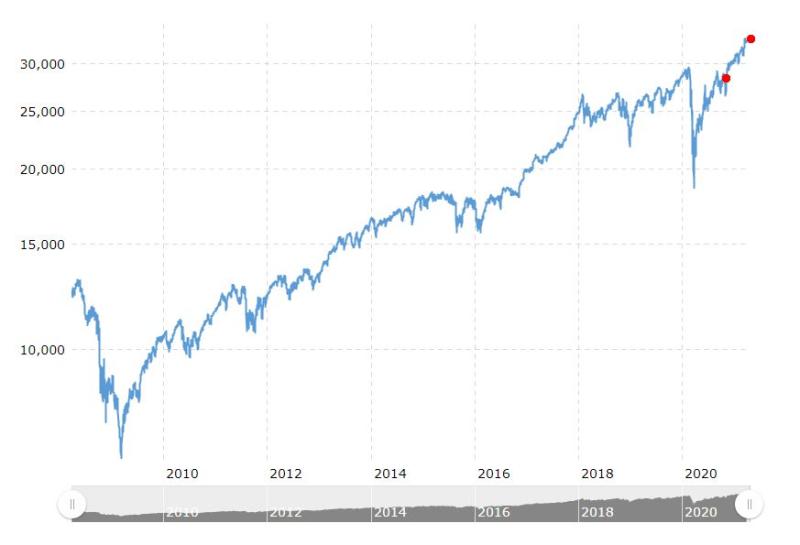 Looks like that proves that Biden is just riding the wave he inherited from Trump.

That donald inherited from....

When you look at the graph from say 2010 until today it is pretty much a straight climb with occasional dropoffs. That is actually also pretty much the case from the beginning of the 20th century (the graph below). Over time the stock market ALWAYS hits new highs. Yet we had Trump constantly blubbering about the new highs HIS administration hit. He's an ignoramus. 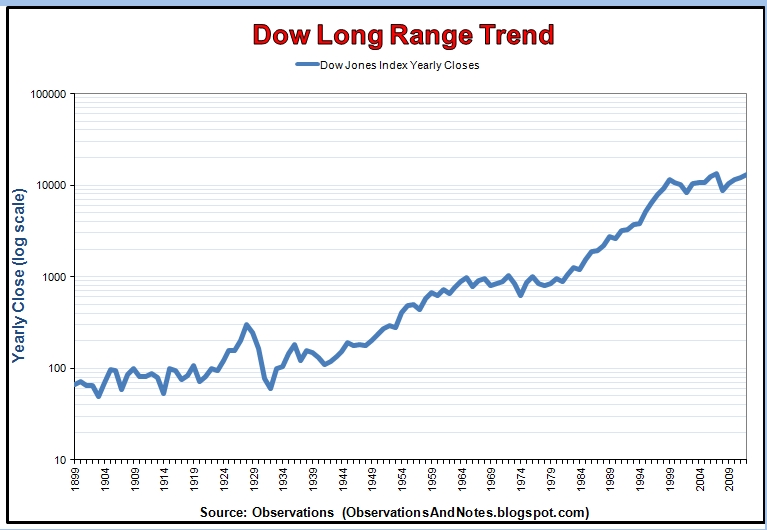 There is a LOT of all time highs on that graph , spanning well over 100 years.  So why did Trump keep bragging that HE was the one presiding over all time stock market highs? "All time" stock market highs coincide with the passage of time, not the arrival of Donald Trump.

Once again....Biden hasn't done anything that will help small businesses recover from the Covid recession, and has shown no interest in helping put people back to work. On the contrary, he only seems to be interested in stuffing the coffers of blue states and Democrat led cites, rather than doing anything of value as regards ordinary working people. We are coming into increasingly uncertain times as the bumbling Biden crew stumbles onward. Markets hate uncertainty, and I would expect a large sell off before too much longer.

If the red states don't want any relief funds, they are free to send it back.

Do you remember him ever talking about it?

Yes, of course he did. Or is this part of the rewriting of history like Obama never blamed Bush once he was President?

Does the author expect anyone who lived through the Obama Presidency to not laugh out loud at this?

So, just going to act like donald never bragged about anything?

All he did was brag on himself...