Kaley Cuoco's makeup artist was in for a big surprise before the 2021 Screen Actors Guild Awards on Sunday.

Cuoco, 35, got cupping therapy right before the big show.

Her makeup artist, Jamie Greenburg, shared an Instagram Reel on Monday of the moment she realized what she was working with and how she covered up the bruise marks.

"I'm a makeup artist and I did Kaley Cuoco for the SAG Awards. I THOUGHT I was prepared…," Greenburg began before Cuoco opened the door to her home revealing the circular marks on her shoulders.


The Flight Attendant actress - who was nominated for two SAG Awards for Best Female Actor in a Comedy Series and Best Ensemble in a Comedy Series - nervously laughed as she told her makeup artist, "Hopefully you don't see my cupping marks during the show."

Sure enough, Greenburg was able to cover up the cupping bruises and Cuoco rocked a hot pink off-the-shoulder gown for the virtual ceremony.

"Needed some magic makeup to cover up those cupping marks so thank goodness for @clarinsusa! We used the Everlasting Youth Fluid to conceal," the makeup artist shared.

Cuoco, unfortunately, didn't take home any awards, but she was grateful for the nominations.

"What an honor to be recognized alongside my amazing cast and crew @flightattendantonmax by @sagawards ! This dream has always been in the back of my mind, but for it to happen feels like I'm still in that dream," the actress captioned a series of photos. "I'm truly humbled by this experience."

In another post, Cuoco revealed that she ended the night by "binging my favorite show," which was Schitt's Creek .

Cupping therapy is a form of alternative medicine in which a local suction is created on the skin with the application of heated cups. Its practice mainly occurs in Asia but also in Eastern Europe, the Middle East , and Latin America . [1] [2] Cupping has been characterized as a pseudoscience and its practice as quackery . [3] [4]

Cupping practitioners attempt to use cupping therapy for a wide array of medical conditions including fevers, chronic low back pain , poor appetite , indigestion , high blood pressure , acne , atopic dermatitis , psoriasis , anemia , stroke rehabilitation, nasal congestion, infertility , and menstrual period cramping . [1] [2] Despite the numerous ailments for which practitioners claim cupping therapy is useful, there is insufficient evidence it has any health benefits and there are some risks of harm, especially from wet cupping and fire cupping .

The lack of apparent benefits of cupping treatments are discussed by   Simon Singh   and   Edzard Ernst   in their 2008 book   Trick or Treatment . [11]

As a pseudoscientific   detoxification   ritual, proponents of cupping falsely claim that it can remove unspecified toxins from the body. [12] [13]   Proponents also falsely claim that cupping "improves blood flow" to help sore muscles. [14]   James Hamblin   notes that a bruise caused by cupping "is a blood clot, though, and clotted blood is definitionally not flowing." [15]

Many critics of alternative medicine have spoken out against traditional treatments such as cupping therapy.   Harriet Hall   and   Mark Crislip   have characterized cupping as " pseudoscience   nonsense", "a celebrity fad", and "gibberish", and observed that there is no evidence that cupping works any better than a   placebo . [16] [17]   Pharmacologist   David Colquhoun   writes that cupping is "laughable... and utterly implausible." [18]   Practicing surgeon   David Gorski   observes, "...it’s all risk for no benefit. It has no place in modern medicine, or at least shouldn’t." [19]

First time in my life I ever heard of this. 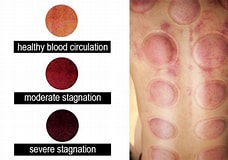 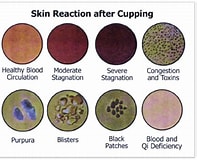 I never heard of this until I saw the remake of the Karate Kid with Jaeden Smith.

I never heard of it until about 20 minutes ago.

Yeah, me too.  Besides, I can think of more enjoyable ways to have my body covered in hickeys.

In addition, a full body massage will release all kinds of toxins within an hour, and without disfigurement.  Might I recommend being close to a bathroom...preferably one in your own home...preferably one that is seldom used.  Several courtesy flushes will be necessary, but, have a plumber standing by just in case.

Sophomore Principal
3  321steve - realistically thinkin or Duu     one week ago