Richard Drew on photographing the "Falling Man" on 9/11

John Dickerson asked, "When did you start making pictures?" "The minute I came out of the subway," Drew replied. 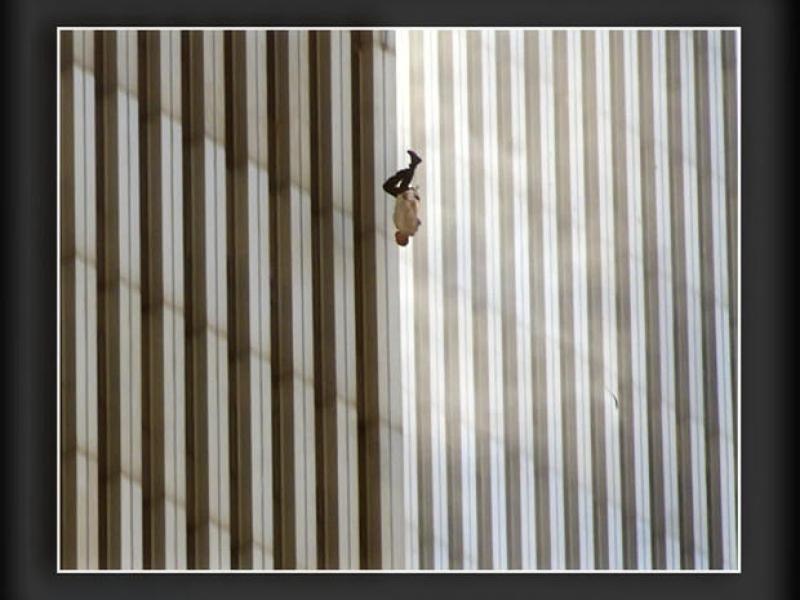 After almost six decades as a photographer, Richard Drew has learned a basic rule: "That you can be two hours early, but you can't be a 60th-of-a-second late. In other words, if you're not there when it happens, you can't take a picture of it."

Drew, who has worked for the Associated Press for the past 51 years, was there in time to capture Frank Sinatra escorting Jackie Onassis … Muhammad Ali delivering a knockout punch … and Ross Perot bursting into the 1992 presidential race in a way that so captured the pepper pot billionaire, it helped AP win the Pulitzer Prize.

But on September 11, 2001, when he made one of the most searing pictures of that day, he was not at the World Trade Center at 8:46 a.m., or 9:03 a.m., when the planes hit the towers. He had been on assignment at a maternity fashion show in Midtown when his office called: "'A plane has hit the World Trade Center,' very calmly," he recalled.

He dove into the subway and emerged on the southern tip of Manhattan.

Correspondent John Dickerson asked, "When did you start making pictures?"

"The minute I came out of the subway," Drew replied.

"What's going through your mind when you're taking them?"

If he wasn't chasing breaking news, he learned to put himself near where news might break.

On June 5, 1968, he decided to see presidential candidate Robert F. Kennedy speak at the Ambassador Hotel in Los Angeles. "The office didn't know I was there; I just assigned myself to go to this job," he said.

Drew went into the kitchen looking for a glass of water. Robert Kennedy was there, too. So was a gunman

"Were you scared when you were making pictures on the day you were at the World Trade Center?" Dickerson asked.

"Not really," he replied. "It's interesting that this camera's a filter for me. I didn't know that the building, the first building had collapsed because I was looking at it through a telephoto lens. And I'm only seeing a piece of whatever's going on."

Drew's image, which came to be known as the "Falling Man," appeared in a number of newspapers the next day. Many people found the lonesome vision too shocking.

"Why do you think they have that reaction?"

Professor Principal
4.1  seeder  Krishna  replied to  Buzz of the Orient @4    one month ago

Those who cannot remember the past are condemned to repeat it

How very often I have posted that quotation on this site - even the quotation gets to be forgotten.

The Naudet brothers were hired by NFDY to make a documentary about a rookie who started in July 2001.

One of the Naudets was in the lobby of WTC North tower, which at ground level was nothing but broken glass and broken

panels of wall marble, Elevators apparently not working,  Absolutely no communications to the 100 elevators.

A huge thud startled everyone. No one said anything.  The cameraman asked "what was that"? A firefighter

gave him that look.  Suddenly an elevator opened and a dozen bewildered people appeared.

Another crashing noise above the firefighters heads.

People who jumped were landing on the portico or vehicles surrounding the building.

Over 200 people jumped from the north tower above the 92nd floor,

some holding hands, some reportedly on or recording with their cell phones.

The fall took 10 seconds and ended as they reached 150 mph.

It is the stuff of nightmares that the networks chose not to share with the public.

It is the stuff of nightmares that the networks chose not to share with the public.

Because if they would have Afghanistan and Pakistan would be nothing more than scorched earth now. Saudi Arabia would have paid a ransom in oil to keep from suffering the same fate; and probably sacrificed those that supported Al Qaeda either to the US justice system- or their own (which is far less lenient). Any country that gave aid or shelter to the Taliban or Al Qaeda would have suffered a similar fate.

There would have been a lot less US service men and women dead and wounded; and the rest of the world would be walking on egg shells never to cross us off again.

So the media didn't do us any favors. 20 years of BS nation building just to make things worse than they were on 9/11. Maybe we will get it right the second time around; because it will happen again- we have guaranteed it.

Their documentary captured the horror of that day better than anyone. They showed the first plane actually hitting the tower. Then there was the shot of all those firefighters waiting to head up....