Television has surpassed theatrical movies as America's premier form of scripted entertainment , mainly because of convenience, and the quality of tv productions that have gotten much better in the age of streaming subscriptions that have put billions of dollars in the hands of content creators.


Television has surpassed theatrical movies as America's premier form of scripted entertainment , mainly because of convenience, and the quality of tv productions that have gotten much better in the age of streaming subscriptions that have put billions of dollars in the hands of content creators. 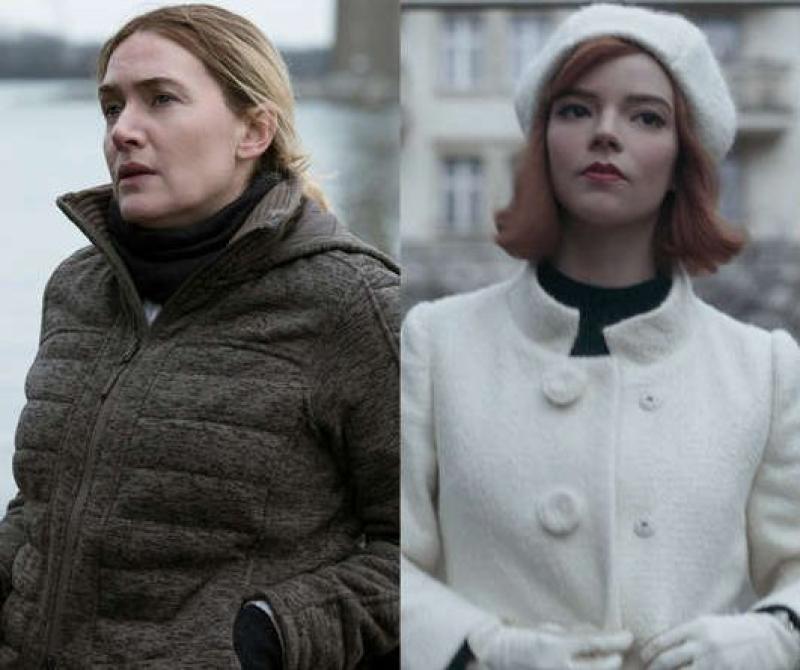 The big contenders for Emmys this year are The Crown, Wandavision, The Mandalorian, Hacks, Ted Lasso, Bridgerton, Lovecraft Country The Queens Gambit, and Mare Of Easttown.

I am most interested in the match between The Queens Gambit and Mare Of Easttown in the Limited Series categories.  I watched them both and both of them were of such high quality that they would have been Best Picture favorites if they were feature films and not tv mini series.

I thought Kate Winslet (Mare Of Easttown) would be a sure Emmy winner for her great performance as a psychologically dysfunctional small town police detective trying to solve a murder most likely committed by one of her friends or neighbors, but I had forgotten she would be going against Anya Taylor -Joy, who gave such an astonishing performance as the quirky substance using chess prodigy Beth Harmon in The Queen's Gambit.  They are both eminently worthy but I have to give a slight edge to Taylor- Joy.  Now watch one of the other three actresses in the category win.

Cedric The Entertainer is the host of the Emmys.  The only explanation for this would be if he has a new series on CBS, which is the network showing the awards tonight.

Cedric The Entertainer is a pathetic stand up comedian.

Waiting eagerly to see if Gibbs survives the boat explosion and Hetty returns.

Same goes for the premieres of NCIS Hawaii and CSI Vegas.

Slowly working my thru the last few episodes of Vikings. Excellent series. So was Gotham.

Vikings is a great show! I know why you like it.

Btw, if you like that, you probably would like, "The Last Kingdom", which is also a true story of when the Vikings invaded England.

Oh that is good! Mr Giggles got me to watch it and I had a hard time turning off the TV

Vikings was a great series but the last episode sucked, you watch a show for years then they give you crap at the end. Speaking of crappy endings the new sopranos' movie "The Many Saints of Newark" will be out Oct 1, on HBO max, it's a Friday so I hope the streaming service doesn't get overwhelmed since a lot of people have been waiting for this movie.

So from the big contenders, I have seen:

The Crown, Wandavision, The Queens Gambit, and Mare Of Easttown and I loved them all, in very different ways, so I can't say which will win.

But I will be watching.

btw.... the big series for me is the return of "Yellowstone". It had an amazing cliffhanger. The other one is "Piccard".

I was happy with the results. A little something for both of the shows I liked.  Kate Winslet won best actress over Anya Taylor Joy. Which was fine. They both deserved to win but only one could.

Cedric The Entertainer was a total embarrassment.  Next time skip the host altogether or bring Johnny Carson back from the dead.

I have been watching The Crown and I love it.

Even though I am late because I just got HBO, I am on the 8th season of Game Of Thrones, and it has been excellent.

I caught a little bit of it and had to turn it off.

I have a feeling millions of people turned it off after enduring some minutes of Cedric The Entertainer as host. First of all , he isnt a good comedian. He's kind of the opposite of funny. Second, his "jokes" and quips were far too race oriented.

On the whole, I thought the banter supplied by presenters was very awkward.  Overall this was one of the worst awards shows I can remember.

Most of the winners were quite worthy, but thats a separate issue than the quality of the awards show itself.

On the whole, I thought the banter supplied by presenters was very awkward.  Overall this was one of the worst awards shows I can remember.

Agreed. A few notes in the time I watched. I saw a woman sitting at a table who looked like she was about to get into a fight with the woman sitting next to her. I thought I saw a huge guy dressed as a woman and I noted one of the male hosts wearing silver high healed shoes. Overall I thought it was creepy!

I saw that . I'm pretty sure it was an act and part of the "entertainment".  They were pretending to be fighting.

I'm pretty sure it was an act and part of the "entertainment".

I didn’t watch it at all, instead I watched football and my team won.

I can tell you that you didn't miss anything. I was reminded of something Phil Rizzuto said during a Yankees broadcast from the 70's. As they panned the stands and exposed some strange looking characters, Rizzuto said "Not long ago it was important to look sophisticated and stylish, today it's all about the odd look!"

The entertainment industry, long known for lack of diversity, is trying to overcompensate in some cases.

Then let it give some posthumus awards to great minority actors like Sidney Poitier, instead of alienating people with a freak show.

Sidney Poitier is not dead Vic.

I am really tied of the politics in these award shows. I wish they would just talk about their careers.

Sidney Poitier is not dead Vic.

I'm well aware of that John, but he is retired.

From what I could see this one had very little of that, probably because the majority of those in the entertainment industry are delighted with what we have in the White House.